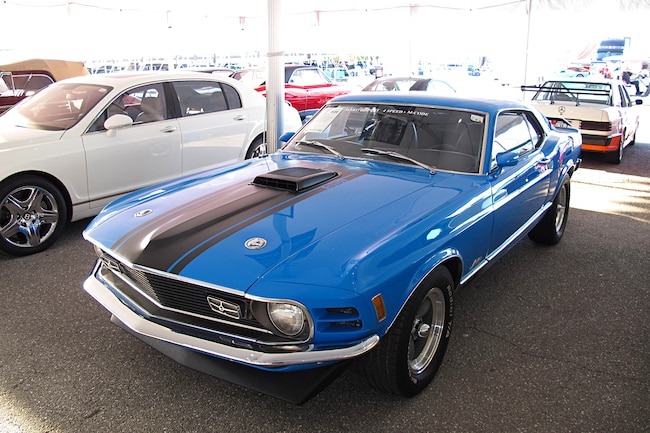 Shaker Hood Graphics
I always enjoy your column in Mustang Monthly. I'm turning to you after several have said, "ask Bob." The questions are for my 34,000-mile 1970 white Mach 1 with 351C and shaker hood that I'm restoring. The correct N.O.S. engine displacement numbers for the hood are (a) black or (b) black with white border? There are N.O.S. numbers offered by several sources.

Second question is the car has a blue interior and the current console lid is padded like a 1970 Shelby. I believe it should be flat with a latch (like a '70 Boss 302). Is that correct? FYI, in my collection today is a 13,000-mile white Boss 302 formerly owned by Don Fezell (best one I've owned to date after several).

Randy, the Don Fezell Boss 302 is an outstanding Mustang. Congratulations on the acquisition. The hood stickers, in my opinion, typically should be solid black. Most of the Ford service stickers have the white outline. The three original-paint '70 Mach 1s I've had were all solid black.

Typically, the '70 Mach 1 console lid was the flat 1970 Mustang rather than the 3-rib Cougar version. Cougars and Mustangs were built on same assembly line.

Detroit Locker Sticker
I have a 1971 Mach 1 Drag Pack with 4:11 Detroit Locker. I was told by an original owner that the '71 Mustang with Detroit Locker had a sticker that went on the dash and a Detroit Locker owner's manual similar to the 1965 G.T. 350 Shelby. Have you ever seen one?

I have what I believe to be the Detroit Locker owner's manual packet with the sticker. I purchased this from a Detroit-area literature dealer with a lot of 1971 Ford press kits and owners' manuals. I also got a few Detroit Locker showroom brochures. I have included pictures. I have only seen one 1971 unrestored car with the sticker on the dash. It was a white hardtop with 4:11 drag pack. The sticker was on the radio delete plate. Note the sticker is much different than the 1965 version. A rare find indeed!

Boss Black
I was told you were the "guys that would know." I am in Vancouver, Canada, and I have a really nice Boss 351 in the paint shop. The painters cannot find a paint code for the hood and rockers (black) and I am wondering if you know what paint was used? Any help would be greatly appreciated.

The original two-tone was low-gloss black. I use SEM Hot Rod black. It comes as a kit with reducer and catalyst. The SEM part number is HR010.