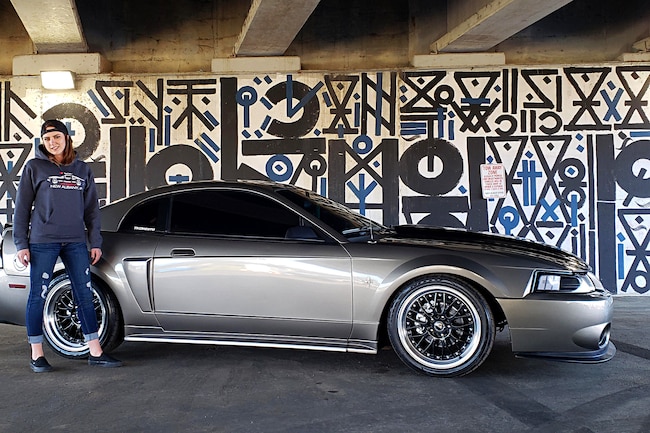 Lindsay Taylor Fender is this week's Mustang Girl Monday, telling us she caught the Mustang bug when she was 17 years old when she learned to drive in a manual New Edge Mustang. She said, "My best friend Leah and I were out riding around in her Mustang. We were at an intersection and I took off and got on the car a little bit on wet pavement and did a 360 in the middle of the intersection. I was so glad the windows were tinted because I was so embarrassed! That experience taught Lindsey how to drive a stick-shift though.

Soon after that she got a white 2003 Mustang with a five-speed, which she traded a Jeep for after she graduated from high school, and recently bought the same exact Jeep back. She drove the Mustang for about three years with a 75hp wet nitrous shot and a tune, including a few nights at the drag strip, before selling it for her current Mineral Gray Mustang that she named "Zeek."

Lindsey said, "I told myself I would build Zeek slowly and right, so in February of 2017 Tyler Summers at BarnBilt Speed and Fab of Statesville, NC started my full rebuild. They installed 'stage two' two Comp cams and I had already put a T-56 in as I was tired of going through TR3650s. I also installed a Pro 5.0 shifter and aluminum driveshaft with 4.10 rear gears. I had upgraded with drilled and slotted rotors, upper and lower adjustable UPR control arms, adjustable camber plates, and I needed something louder than Flowmasters so hello SLP Loudmouths, off road X-pipe and long tube-headers. I broke down and upgraded to a McLeod clutch after blowing a stock one out doing a little street racing in 'Mexico.' I had to limp the car home with no clutch that night!"

Lindsey went on to say, "After the rebuild that Tyler Summers did on my car, I was super impressed with the performance, but it needed a tune because I also put on a 150-shot NOS system, so I took my car to Shrader Performance in Gastonia, NC. On the dyno it made 380 hp and 487 lb-ft, which is good for a two-valve on a 150 shot. I know there are quicker cars out there, but I was proud and impressed. I also have a 2001 Performance Red five-speed two-valve I bought with a blown motor and I bought back what once was my immaculate white two-valve but by then was trashed. I bought it back for $250 just for the motor. My best friend and like-my-sister Rebecca swapped the engines from the two cars so I had a driver while Zeek was being rebuilt."

After the engine swap, it started on the first crank, which instilled a ton of pride in Lindsey, saying, "That wasn't the first time I replaced a two-valve motor or the last. That leads to my sleeve of tattoos, which is my mechanic sleeve. It is just a collage of all the parts I have replaced or parts that were upgraded to my car, and parts I destroyed like my clutch. Diego Hernandez of Morganton, NC is the great artist that did my sleeve and I'm ready for more! He also painted the Mustang emblem on my car."

Lindsey lives in Valdese, NC, is 23 years old, and taught herself all about mechanical things, saying, "I believe I got the interest from my grandfather who has been gone for many years now due to cancer. I take myself as someone that is mechanically inclined. I do it as a hobby since I work as a bartender in Hickory, NC." She wanted to be sure to acknowledge Tyler Kleer of TKO Restoration, who she met at the 2017 Mustang Week event, saying, "That's one person I'd love to point out for being such an awesome person with cars. He is very good at perfecting anything. His knowledge of Mustangs is endless."