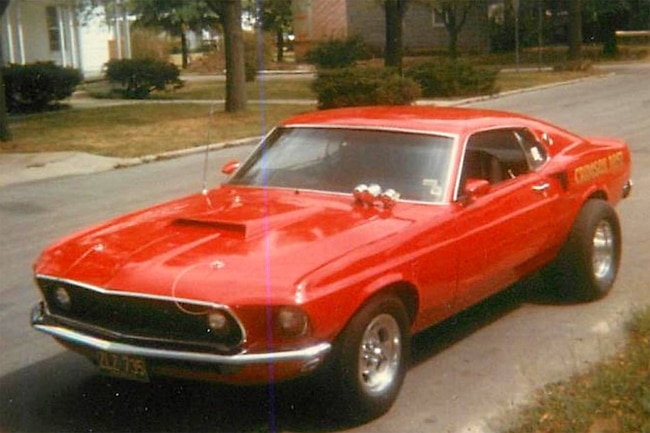 When Bill Lasater went to look at a 1969 Mach 1 in 1981, he had visions of what it would be like tearing around the streets of Eldon, Illinois, and tackling the quarter-mile at nearby Mid America Raceway (Wentzville, Missouri) and Kansas City International Raceway (Kansas City, Missouri). Bill had been no stranger to performance cars, having owned a myriad of Fords, including a built 1966 Fairlane XL with a 390, a 1956 Ford two-door sedan, a handful of Rancheros, a 1961 Thunderbird, and a pair of 1971 Mopars (Road Runner and Charger).

Eldon had a solid performance scene with a group calling themselves the Eliminators Street Racers in town, and Bill was in dire need of a car that would make its mark in the club. He spotted a 1969 Mach 1 at a local gas station and stopped in to chat with the owner. He expressed interest in potentially buying the car if it was for sale, but at the time it wasn't. Bill handed off his phone number in hopes that one day it would be, and lo and behold, his phone rang a few months later. When Bill arrived to look over the car, he knew that he was staring at the blueprint for bringing that goal to fruition. At $1,500, the car was too good of a deal to pass up.

Interestingly though, while examining the car another odd thought came into his head. He noticed that there was a spot in the trunk to mount a battery, and under the hood those shock towers looked familiar. The car showed signs of a previous bad wreck that had been cheaply repaired. Could he just have accidentally stumbled upon a rare Boss 429?

After getting the car home Bill dug into the Mustang, and his suspicions were confirmed while building the car for racing. On the fender apron was the original VIN stamped into the fender apron showing the familiar "Z" in the fifth position. As cool as that was, this was still the early 1980s, and the Boss 429 rage that would develop less than a decade later wasn't in swing. So, Bill pushed on with building himself a fast Mustang.

The Crimson Rose
Wearing Candyapple Red paint, Bill began thinking of names for his new Mustang. His old Fairlane ran under the nickname Grape Ape (guess the color?), so it only seemed natural to reference the color in the name—it became Crimson. Needing a touch more for the moniker, Bill added his mother's name (Rosemary) to come up with Crimson Rose. With a name intact, it was time to build the car.

Bill settled on using a 428 SCJ engine he had, mating it to a C6 and adding a set of stump-pulling 4.57s out back. The interior remained virtually untouched; still wearing its original black attire. Crimson Rose was written on the rear quarter-panel in gold paint with a black outline. To top off the look, Bill added a Cougar Eliminator hoodscoop.

After nearly a decade of racing the car, Bill found himself in the crosshairs of what nearly 50 percent of married couples end up going through—getting a divorce. And like nearly every horror story that has the big "D" involved, some things must go. Unfortunately, Bill had to unload the Mustang.

The silver lining in it, though, was it was the early 1990s, and Boss 429 popularity was beginning to apex in what would be one of many spikes in value for these cars. Bill sold the car, noting its Boss 429 heritage, to a reseller in Indiana. After a few years he reconnected with the reseller, who noted it took a while to sell the Boss 429. The new owner, he was told, was a doctor living in Illinois. Bill successfully connected with the new owner, who was uninterested in connecting with him regarding the car.

All these years later Bill still wonders what ever happened to his old Mustang. Why was it repaired and changed to a Mach 1? Did the doctor ever restore the car? Why hasn't anyone ever contacted him? Ownership history is a big deal for preserving the heritage of these cars.

Help Us!
If you recall a Boss 429 in the Peoria, Illinois, area circa the early 1990s, we'd love to hear from you. We're looking for info from people in the Iberia, Missouri, area that may remember this red Mustang. We'd love to help the owner of the car put the full history of it together. Please contact us at www.facebook.com/lostmusclecars

Once Bill applied his touches to the Mustang this was the end result. The Mustang had the look, performance, and attitude of a street killer.
Much like a car club, "The Eliminators" enjoyed showing their cars and, of course, racing them!
Bill's Mustang was dressed as a Mach 1. Here you can see the reason why it needed a transformation, as another Eliminators member's Chevelle casts an intimidating pose.
The Crimson Rose was street legal. It's safe to assume most competitors ended up seeing the car from this angle.
Bill enjoyed showing the car at local car shows. The coiled Cobra on the hood gives you a good indication of what lies below. Note the Boss 429 shock towers.
Street/Strip was a prerequisite for being a member of the Eliminators Street Racers. The Mustang squares off against a 1968 Road Runner in the left lane, which was given a head start .and was ran down and passed.
The clutch pedal is still in view here calling back to its days as a four-speed. The dash was left stock, with the only signs of modifications coming from an automatic shifter and aftermarket steering wheel.

William White Is Pursuing A 9-Second Path With This Ex-Trooper LTD And A Lot Of Used Mustang Parts
Fierce Ford Friday: 1968 Shelby G.T. 350
10 Must-Watch Storylines in NASCAR This Year