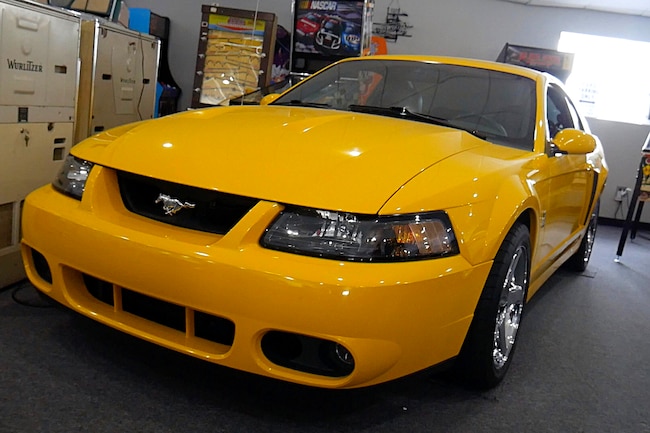 You know the saying, "you can't judge a book by its cover?" That saying applies to the car world as well. This 2004 Cobra might look like your standard Mustang (with a different and distinctive front fascia) but this one is packed with a supercharger and is more commonly known as "The Terminator." The Terminator name didn't come from Hollywood, but rather from the SVT Team led by John Colletti. And if this Mustang made you look, then you had better look fast that's because the Terminator was only produced for model years 2003 and 2004.

The name referred to the engine, a 4.6L DOHC V-8 similar to the base engine but packing an Eaton M-112 roots-type supercharger and beefier rotating parts such as Manley pistons and H-beam rods, wrist pin oilers, and more in order to stand up to the 8psi of boost. Output was 390 hp.

Now, just like the famous movie "Terminator," this supercharged Ford could have also used the line "I'll be back" at the end of its production in 2004 since this is the car that started today's forced induction muscle car power wars. Thanks to the Terminator, we now live in a world of Mustangs pumping out 650 horsepower and, some production models like the supercharged Hellcat and Demon are making twice as much power than the once mighty Terminator.

While the horsepower of this supercharged alien from another planet may seem mundane today, on the street it's just as impressive as it was when it landed here 15 years ago. Sporting an independent rear suspension, this groundbreaking Mustang handles well and allows drivers to take advantage of the blower's contribution to power. Most importantly, under a heavy right foot, the whine of the supercharger never, ever gets old.

Check out the video of Ron Hawkinson describing his friend Aaron Schmitt's '04 Cobra. Like Arnold Schwarzenegger said in the movie, Terminator 3 "I like this car." We do too Arnold, we do too. And you know we'll be back.