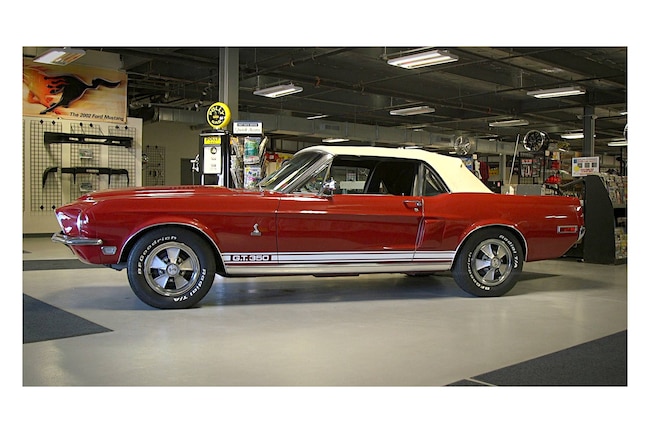 When people speak of icons in the high-performance world, few stand out more than the 1968 Shelby Mustang, either G.T. 350 or G.T. 500. In 1967, when the Mustang grew a little bigger for the 1967-1968 model year, Shelby decided to step up the styling with more custom bodywork than the '66, creating his own front end with a longer hood with a functional scoop, center-mounted high beams in a new mesh grille, and Cougar/Thunderbird taillights.

Those changes made the car a distinctive product of Carroll Shelby and looked fantastic, really separating it from more pedestrian Mustangs, and Ford engineers improved on the design for 1968, reworking the hood scoop, relocating the high beams closer to the standard headlights (for better cooling), and slightly re-doing the taillights. The G.T. 350 also got the Mustang's production 302 (previous years were 289ci). Production for the 1968 Shelbys also relocated from Shelby's Los Angeles facility to A.O. Smith's facility in Ionia, MI.

The 1968 Shelby would most importantly live as an icon as the last incarnation with Carroll Shelby's magic touch and input. The next year Ford would take over the design and style decisions, leaving Shelby little say in the design. It didn't take long for Shelby and Ford to terminate their agreement and by the summer of 1969 the iconic partnership that had started years earlier was done.

This week's Fierce Ford Friday features the 1968 Shelby G.T. 350 convertible that sits in the showroom at Mustangs Unlimited (http://www.mustangsunlimited.com/). It's Candy Apple Red with a Saddle interior, has power everything, and less than 60,000 miles have traveled under its tires. As Kevin Gormely of Mustangs Unlimited said, those tires and the battery are the only non-original parts on this car. Oh, and it's for sale. If you have to ask, "how much?" then you probably can't afford it!