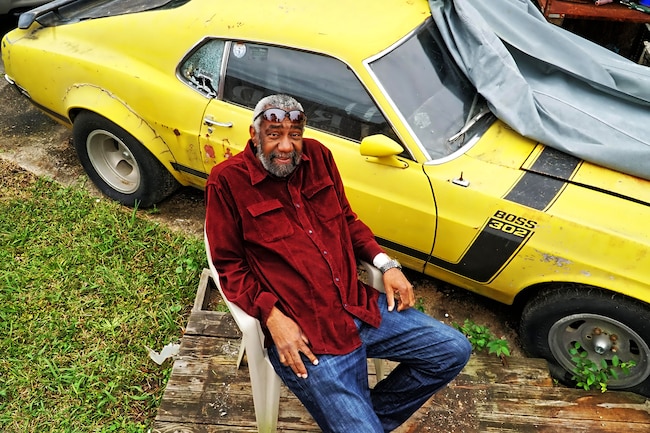 While we were in Baton Rouge, Louisiana, to cover the Mustangs consumed by trees (http://www.mustangandfords.com/features/1904-ponys-in-the-trees/), Thad Landaiche took us to see a 1970 Boss 302 that he had noticed in the backyard of the car's original owner, a Vietnam veteran named Reginald "Reggie" Verret. Thad told us how he had knocked on Reggie's door, hoping he might make a deal. Like the rest of us, Thad is always looking for a buyable barn find, especially from an original owner.

Unfortunately, the car wasn't for sale. In fact, Reggie showed us a foundation for a garage he was planning to build where he could restore this car. (Recent floods had thwarted this effort.) He was happy to show us his 1970 Boss 302 and tell us what it was like to buy one brand new.

Reggie continues, "I got drafted, and while I was in the service, we ordered the Boss 302. It came, and I was in the barracks when my wife and my homeboy came up to Fort Polk [near Leesville, Louisiana] to bring the car." Reggie had been telling all the guys in the barracks that he had a car just like the one on the cover of MotorTrend, but they didn't believe him. "I was inside when a couple of guys ran into the barracks to tell me a lady and somebody else were in a Boss 302 just like the one I said I had. I went outside and had to give everybody in the barracks, which was almost 100 guys, a ride in the car."

Reggie was reliving this moment, and we could understand why he still had the car, even though it was in his backyard under a cover that Thad helped him remove for us to see. A huge fiberglass Corvette L88 hoodscoop was a big surprise. "Somebody stole the louvers off the back window," Reggie says.

The '70 Boss appeared to have seen plenty of hot-rodding. The front wheelwells had been radiused for larger tires. Verret finished basic training and went to Fort Sam Houston in San Antonio to train as a medic. While stationed there, not knowing whether he was going to Vietnam or not, Reggie recalled he and two of his buddies enjoyed a weekend pass.

He says, "You could go 150-mile radius without getting into trouble. We ended up in Baton Rouge, which is 600 or 700 miles from the post." In a futile rush to get back to the barracks on time, Reggie was doing about 130 mph between Houston and San Antonio, when he says he "saw shiny metal on the other side of the highway." Reggie slowed down to 60 mph, but it was too late. A state trooper, "a big fella with a cigar in his mouth," pulled him over and wrote a ticket for 90 mph, a break for the soldiers.

Reggie got back to the post and one of his buddies was covering for him, sleeping in his bed so he didn't get into trouble. But, at the end of the month, when "they call your name to pick up your pay voucher," Reggie discovered the ticket was more than his monthly pay, and he had to go into the next month to get paid.

Reggie recalled 555 medics in his class, out of which five went to Vietnam. He used his training to work in the dispensary and take care of guys coming home from Vietnam in Fort Hood, Texas. "I got out in August of 1971 and came back to Baton Rouge to finish school," he says.

The Boss 302 started acting up on this trip. By the time Reggie got home, the 302 had six cracked pistons, an issue that has been well documented on 1970 models, especially common when hot-rodded.

"A buddy of mine, he is deceased now, took the engine down and rebuilt it, bored it 30 thousandths, and put in 12:1 pistons," Reggie says. The factory cam was also changed to a more radical design for more performance.

Reggie says, "My buddy had a Mustang, a 428, and I had the Boss, and we would go to Erwinville [State Capitol Raceway], but most of the time we were on the street."

Reggie parked the car about 20 years ago, and he's had the opportunity to sell his unrestored Boss 302 several times but has decided to keep the car. He marveled, "It's been, what, 50 years—1970 to now?"

Battle With a Jaguar
"I'm driving from Homer to New Orleans one day, my wife and me. I was doing about 75 or 80, and I'm looking in my rearview mirror and see this Jaguar coming up on me, an XKE. I think it was silver, and he was getting closer and closer, and I told her, I said, 'This Jaguar is coming up on us.' She says, 'If you let that Jaguar pass us, I'm turning this car in.' I floored it and my speedometer went all the way around past the 120 all the way to the bottom. I looked in the mirror, and I didn't see the Jaguar anymore. So that was rewarding for me because I'd get to keep my car."

Reggie Verret is keeping the 1970 Boss 302 he ordered brand new from Terry Bone Motors in his home town of Homer, Louisiana, right after he went to the service in October of 1969.
Reggie parked the Boss about 20 years ago. The car still wears the marks of its street racing and drag racing days.
Thad's recommendation is to get the Boss 302 running and take it to shows as is. This idea brings up the question: What would this Boss 302 look like restored with its 1970s vintage modifications?
No doubt, these hastily flared wheelwells would draw considerable interest. They had to be done many years ago, as nobody would alter a Boss 302 like this today.
Reggie picked these Boss 302 heads up for $75. They've been stored in this trunk for decades.
The $75 price for the pair of Boss 302 heads included this original aluminum intake, seen here stored on the passenger-side floorboard.
Another modification from days gone by sure to turn heads is the fiberglass Corvette L88 hoodscoop added in the 1970s.
The Boss's interior is a mix of original, aftermarket, and grime.
The March 1969 MotorTrend cover helped launch the Boss 302, and it probably had something to do with Bright Yellow being the most popular color for the Boss 302 in both 1969 and 1970.
The original Boss 302 engine is still intact. Reggie and a buddy of his rebuilt the engine in 1971 due to cracked pistons, at which time they also installed a more radical camshaft.
Thad Landaiche (left) tried to purchase the Boss 302 from Reggie Verret. The car isn't for sale. Thad invited Reggie to participate in local Mustang club activities, where he could show his car and get help from members.