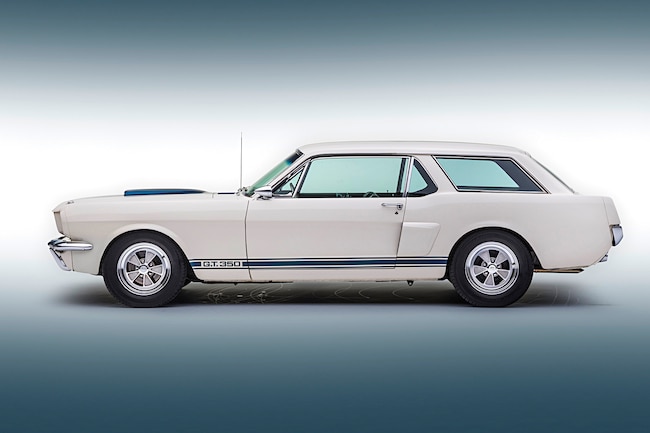 Before it had even been given an official name, the Mustang went through several different concepts and designs in order to give Ford execs choices in deciding what the final car would look like. We all know what they decided on—it’s what this magazine is all about—and we’ve shown a handful of the different design experiments in past stories. One of those that we haven’t touched on in some time is the station wagon concept, which got as far as a clay model within Ford Motor Company in the early Mustang design stages.

Barney Clark was an executive with J. Walter Thompson, Ford’s advertising agency, and along with designer and journalist Robert Cumberford and car enthusiast Jim Licata, he dreamed up a two-door station wagon version of the brand-new Mustang for 1965. Their inspiration was heavily influenced by Chevrolet’s Nomad two-door wagon of 1955-1957 that was built off of its existing sedan, and the Mustang just seemed like a natural evolution of the concept. Instead of pitching the idea to Ford to build, they sent a 1965 289-powered hardtop across the Atlantic to Turin, Italy, home of Construzione Automobili Intermeccanica. There the car got a wagon roof, a bottom-hinged tailgate, a retractable rear window, a relocated fuel filler, and folding rear seats. It came back to the United States after 11 months, but obviously Ford passed on the project, having already considered the idea with its own clay model during the early Mustang design stages. Clark and Cumberford might have been secretly banking on that, with plans to go into production and build Mustang wagons themselves if and when Ford turned it down. They even had serious discussions with Holman-Moody (well known for the GT40, NASCAR racing, and much more Ford-powered race machinery) to build a series of Mustang station wagons and sell them through Ford dealers. For reasons unknown today, but certainly involving the cost to manufacture, they never did set up production, and the “Intermeccanica Mustang wagon” became a one-off. It sadly has been lost to time and nobody knows where it is today.

While researching the wagon’s history, we ran across a 2009 story on Hemmings Daily that detailed reader John Murphy’s experience of seeing the car parked on a street in a suburban New Jersey neighborhood in 1966. He snapped a bunch of photos before being chased away by two guys—possibly Clark and Cumberford themselves. That green wagon appears to be the real deal, even with the correct license plate. As the Hemmings story said, “[The license plate was] New York 4N-5600, of the orange-on-blue style that New York used from 1966 to 1973. It appears the Intermeccanica-built Mustang station wagon that got so much exposure in the period buff books had the same plate. The 1965 build date (and late 1966 magazine coverage) fits with both the license plate and the date Murphy spotted the wagon. The leaves are still on the trees, so he may have even spotted it before the magazines hit the racks, causing such consternation by the guy who told him to stop taking photos, who could have been either Barney Clark or Bob Cumberford, both of whom were instrumental in having the wagon built.”

Cumberford was a designer and journalist at Car and Driver magazine, so the world first saw the Mustang station wagon on the cover of the October 1966 issue of Car and Driver. There were some vague reports about the car being seen all the way in Amsterdam, but whatever happened to the Mustang wagon is unknown at this time. It is not a car that fades into the crowd, so we imagine it must have been destroyed, crushed, or otherwise sent to the automotive afterlife. Regardless of where the Intermeccanica-built car is, the idea of a Mustang station wagon has inspired countless people to custom-build their own, such as the white Gloria Hoshiko–owned car that has appeared regularly at the Knott’s Berry Farm Fabulous Fords Forever show.

Richard Kaneshiro of Southern California now owns this same car; he purchased it from Gloria after years of admiring it at local car shows, including Knott’s. We ran into Richard at Shelby American’s digs in Gardena while checking out the Original Venice Crew in action building continuation G.T. 350 Mustangs. Richard told us that he now owned the car, so we immediately had him bring it into our photo studio for a proper photo shoot. Richard’s one-of-one Mustang wagon certainly draws a crowd everywhere it goes, including among the highly jaded car guys and girls in our El Segundo, California, office, many of whom came out to look at the car in our parking lot and ask questions.

This is not the Intermeccanica car that has been lost to history, as mentioned above, but that car inspired this one. This car began life as a standard Mustang with a 289/C4 drivetrain (it’s not a real Shelby G.T. 350, so you purists can put your pitchforks and torches away) and was turned into a station wagon by Gloria Hoshiko’s husband, Bob, in the mid-1970s. He was inspired after he was saw photos of the Intermeccanica car and also after having seen a Pete Brock illustration of a Mustang station wagon from 1966. Hoshiko owned two G.T. 350s and was known as a specialist in Mustang restorations; he bought a copy of that aforementioned Car and Driver issue at a swap meet and knew what his next project was going to be.

With the Intermeccanica Mustang wagon in his brain, Bob bought a ratty 1966 hardtop for $200 and began the seven-year process of turning it into a station wagon. He replaced several of the bad sheetmetal panels and added a Shelby-style fiberglass hood, and then started cutting the body to build the wagon’s back half. The Intermeccanica car used custom-built rear quarter-windows, but Bob found windows from an import car that fit his design, and while the Intermeccanica wagon used a bottom-hinged folding tailgate, Hoshiko’s design is a more modern one-piece hatch that hinges at the top and incorporates the original trunk lid.

Hoshiko found that cutting the rear half of the car apart took away a lot of structural integrity, so he meticulously built a frame for the hatch and welded it into the car’s body structure. Supposedly, this alone took hundreds of hours of fabrication, but the end result was more functional and pleasing to the eye than the Intermeccanica car. Inside, he used a folding seat from a ’66 fastback and grafted together quarter-panels from both a hardtop and fastback, with aluminum panels to fill the openings.

With the bodywork done, Hoshiko painted the car Wimbledon White with blue stripes and put the G.T. 350 goodies on it, even going so far as to purchase a Hi-Po 289 from a K-code Mustang with the correct Shelby parts on it. The suspension is all stock, so it rides smoother than a stock G.T. 350, which was always Bob’s goal. You’ll also notice a front bench seat. He was quoted as saying, “It is odd to see a G.T. 350 with a bench seat, but it gives me more room to squeeze a third person in the front if I have to.” As reported in the October 1991 issue of Car Collector magazine, Car and Driver’s David E. Davis put 1,000 miles on the original Intermeccanica wagon. He drove it around Detroit, where it got rave reviews by everyone except Ford. It was also spotted by a GM designer who freaked out when he saw a Ford-built prototype that he didn’t know about. He lit up the phones all around town trying to figure out what Team Mustang had up their sleeves!

Bob Hoshiko died several years ago, and Gloria continued the tradition of showing it at Fabulous Fords Forever and other local SoCal car shows, and that’s where Richard Kaneshiro discovered the car. After years of admiring it, he eventually struck a deal with Gloria to buy the car. Now he’s enjoying driving and showing it, even driving it to our studio when the vast majority of cars photographed there are trailered. “It’s a good driving car, very enjoyable,” he reports. We went for a ride around the block and totally concur.

More on the Mustang Wagon
During the past few years, we have outlined other Mustang wagons on Mustang-360.com and in the pages of Mustang Monthly, such as Joe Kamp’s custom build. Donald Farr also penned a story on the Hobo Top, an aftermarket fiberglass roof that converted a 1965-1966 Mustang convertible into a pseudo wagon in just a few minutes.

The Hoshiko-built wagon’s rear hatch is hinged at the roof, whereas the original prototype was hinged at the bottom.
The Mustang wagon has a fairly rare front bench seat and a fold-down rear seat from a fastback.
Bob Hoshiko scored a Hi-Po 289 from a K-code Mustang with the correct Shelby speed parts on it.
The Mustang wagon under construction by Bob Hoshiko.
This is the original cover of Car and Driver from October 1966 with the Construzione Automobili Intermeccanica–built Mustang wagon “prototype.” If you look closely at the black-and-white photo, you can see how the hatch was hinged at the bottom like more of a traditional 1960s wagon clamshell.
Even Shelby’s designer Peter Brock thought about a Mustang station wagon, penning this illustration in February 17, 1966. This was the inspiration behind Bob Hoshiko’s build of the car on these pages.