Just when you think you know somebody… 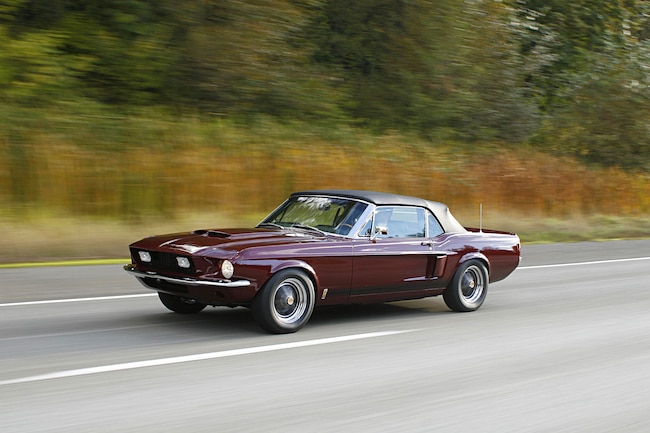 To be honest, we thought we had Jerry Walker pegged. You see, we originally knew Jerry as the owner of a fastidiously restored big-block 1967 GT hardtop, followed by an equally stock but more driver-oriented ’67 GT fastback. We were stuck with the “Mister Stock” mindset until a couple years ago, when Jerry shared a ’67 convertible he was building with us. That car is the one you see here, and while there are plenty of factory-inspired elements, the convertible is a major break from nut-and-bolt correct.

A couple of things strike us about this newly finished convertible. First, Jerry did most of the restoration and wrench-turning himself. Other than the Ford Performance crate engine, the gorgeous Vintage Burgundy paint, and a few odds and ends, it was Jerry who did the work, mostly in his home garage. Another issue of note, likely more evident in person than photos, is the quality of the work. The same attention to detail that was evident in Jerry’s coupe is on full display here. Perhaps one of the most obvious places this is evident is in the panel gaps. Anyone who has worked with Shelby fiberglass—whether original or reproduction—knows these pieces have to be worked in order to fit well. Check out the panel gaps on some of our close-up photos, as they are spot on. Jerry spent dozens of hours getting the fit just right, even taking a bodywork class at Renton Technical College, where he learned about the craft from instructor Shawn Ervin. Maxwell Kehrer of KehrerKraft did the final prep, and then United Auto Body shot the PPG two-stage paint, but we’re getting a bit ahead of ourselves.

When Jerry decided to add a ’67 convertible to a garage that already contained two fixed-roof Mustangs, he knew this one would be built his way. Clearly, the car is Shelby-inspired, but it’s not a clone per se—rather, it’s a custom Mustang that won’t see itself coming or going. Recall that Shelby didn’t build a convertible Mustang for ’67 other than one prototype, and as such you simply don’t see many being emulated. Jerry’s plan called for traditional Shelby styling cues, while at the same time incorporating some of the near-invisible driving and performance enhancements that are available to enthusiasts today. Built from a solid ’67 C-code platform, the car appears much the way a ’67 Shelby convertible would have been, with several notable exceptions. Sharp eyes will notice production Mustang 7-inch headlights instead of the ’67 Shelby 5-inch units; the car also sports rectangular Marchal foglights, like the ones that were fitted to early-’68 Shelbys and California Specials. The side stripe and emblem placement are also unique to this car, as Jerry strove for something different yet tasteful.

Mechanically speaking, modern technology is embraced via a Ford Performance 302, which has been made to resemble a Hi-Po 289. A repop Cobra intake, valve covers, and a Holley 715-cfm four-barrel are largely responsible for the look, but so are the Tri-Y headers and Autolite dual-point distributor. Of course, all these pieces are solid power producers, and Jerry picked up a little more by having PowerHeads port-match the GT40X aluminum heads and Cobra intake. It’s a fun combination when paired with a TKO 500 five-speed, which sends the twist to a Currie aluminum 8-inch third member fitted with 3.25 gears.

It’s in the suspension and brakes where this car moves into the 21st century, and while they’re hidden from view, Jerry assures us the changes have made the car drive significantly better than his stock ’67s. Total Control was called on for a full catalog of suspension goodies, including coilovers all the way around and a G-bar four-link out back. Steering is vastly improved by a Randalls rack-and-pinion setup, while the former four-wheel drums were replaced by Baer four-wheel discs with Shelby-emblazoned calipers. Chassis stiffness is markedly improved by an export brace, Monte Carlo bar, and subframe connectors.

Inside, we find a ’67 deluxe interior much like what Jerry’s hardtop was originally fitted with, which also came standard on ’67 Shelbys. The steering wheel, rollbar, and underdash gauge pod are reproduction Shelby pieces, while the tilt wheel, AM/FM radio, tach/speedo cluster, and Convenience Control panel are restored originals. Jerry had ABC Quick Stitch in Renton, Washington, cover the interior quarter trim panels in a matching black vinyl, which provided the perfect space for 6x9-inch speakers powered by a hidden audio system.

It took us a few moments to digest what was going on with the seats on this car—they look so right, and yet they’re not. What you’re looking at are bucket seats from a ’69 Mustang, including the factory headrests, reupholstered by ABC using TMI ’67 Comfortweave material. Then, because Jerry couldn’t find a good set of original ’67 deluxe seatbacks, he fitted ’69 Galaxie XL seatbacks instead. The result is absolutely factory-like and attractive, yet unlike anything we’ve really seen before. The custom buckets blend so well; they would be totally overlooked as a modification by anyone not immersed in the Mustang world.

While Jerry still owns and loves his two stock ’67 GTs, the convertible is hands down his favorite to drive. And who could blame him what with modern steering, suspension, brakes, sound, and the fun that stems from a folding top? Jerry surely nailed his first foray into the world of modifieds with a unique blend of personal preference, period components, current trends, and attention to detail. But now with a great example of each body style offered in ’67, you’ve got to wonder what comes next? Is this the complete collection? Is another build on the horizon? Will he break out of the 1967 mold? Perhaps only time will tell, but we do have Jerry pegged in this regard: Whatever comes next, be it stock or not, it’s going to be good!

Jerry chose a stock 1967 Vintage Burgundy over the convertible’s original Lime Gold. Curiously, Vintage Burgundy wasn’t included in the ’67 Shelby color palette, but it sure looks fantastic!
Sharp-eyed Shelby aficionados will notice this car has Kelsey Hayes Magstar wheels but not ’67 Shelby-spec Magstars. Jerry realized that the original Magstars fitted to ’69/’70 Mercury Marauder X100s had centers 1 inch larger in diameter than the ’67 Shelby versions, and thus, clearly bigger brakes. He had Tru Design re-rim the wheels to appear like Shelby wheels (chrome rim versus trim ring) and took advantage of the extra clearance via Baer rotors with twin-piston calipers.
The interior is based on the ’67 Interior Decor Group option, in all its brushed aluminum glory. One of the rarer options that Jerry fitted is the Convenience Control panel in the center of the dash, with reminder lights for seatbelts, door ajar, low fuel, and parking brake. As an aside,’67 Mustangs ordered with air conditioning and convenience control required a lower console too—the four lights being mounted on the vertical section of the console.
Viewing the tires from a distance will make you think the convertible is riding on Shelby-spec Goodyear Speedway 350 tires, but a closer look reveals something else. Jerry’s car is actually shod with P215/65R15 BFG Radial TAs, but the Goodyear lettering from tirestickers.com gives a nice period touch.
Factory Shelby panel gaps surely didn’t look like this in 1967! Jerry spent many hours finessing the bodywork to yield outstanding panel alignment.
The engine compartment looks the part of a vintage Hi-Po 289, even though it’s a Ford Performance 302 crate engine with aluminum GT40X heads and a reproduction Holley 715-cfm carb. Ever on the lookout for rare factory pieces, Jerry found a ’67 Speed Control (cruise control) unit from a ’67 Cougar and fitted it to his convertible. Parts of the system are visible at the rear of the engine compartment on both the left and right sides.