One of Eight 1971 SCJ Convertible Comes Out of Hiding 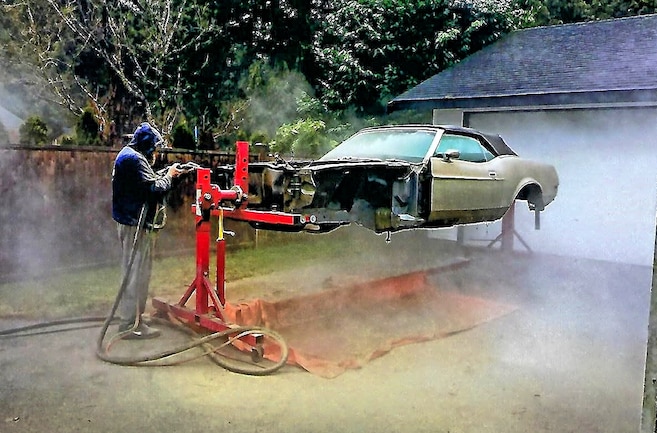 Ford built eight 1971 Mustang convertibles with the 429 Super Cobra Jet engine—five with four-speed and three with the C6 automatic, as seen here.
Moore said, “I’d seen the car once or twice around town, over a period of time. It was a convertible and a big block, and both those things ticked my boxes.” Moore thought the car was nice looking in its original silver paint with black stripes. But, the original 429 block was long gone.

“It had a 429 service block when I checked all the numbers and stuff. It had been through a pretty hard life before I ever owned it. One of two owners prior to me used to street race it, and I remember when I bought it that line lock wires were disconnected, and slapper bars were welded on that had been taken off at some point.”

The 429 Super Cobra Jet has a service block from many years ago.
Moore cleaned all that up years ago and drove the car daily, and not just to and from work. As a SCJ, the rear axle ratio was made for drag racing with a set of 4.11s. Moore drove the ’71 to the Car Craft Street Machine Nationals in Indianapolis, Indiana and he also drove low-geared ’71 to Key West, Florida and back not once, but twice. This is a 55-hour trip, 3,608 miles each way.

After 12 years, Moore said he went racing with a ’57 Ford Custom two door he built, and stuck [the Mustang convertible] in the corner of his garage. This would have been about 1990. Over the next 25 or so years the body deteriorated due to its proximity to the Pacific Ocean. Michael intended to rebuild the car one day and it weighed on his mind every time he passed by the car in his garage.

Moore is installing a set of John Kasse Boss 429 heads, which bolt to a stock 429/460 block without engine oil modifications.
“Finally, I said enough is enough. I’ve got to get this thing back on the road. Last January I was working on it and a friend of mine came over to give me a hand one day and said, ‘why don’t you use your garage?’” The answer was Moore’s garage was full of cars so when his friend offered his fully furnished home shop with almost every tool known to man, and hoists and equipment, Moore accepted. The rebuild was off and running. A big deal was quarter panel damage from decades ago.

“A lady was backing up in the street in a big old Dodge van, and she hit me and creased one of the quarter panels.”

Moore rounded up two quarter panels from Ford in 1983 and recently installed them in the restoration. The car has resided in the corner of his garage since 1989.
Moore phoned a friend who was the parts manager at a local Ford dealership. He found two quarters in the Ford parts system: one in South Carolina and one in Ontario. Apparently, they were the last two in Ford’s inventory. “I ended up with both NOS quarter panels for a 1971 Mustang convertible and carried them for 20 odd years before I started working on the car,” he said.

In the next year or so the 1971 Super Cobra Jet Mustang convertible should be done, but it won’t be 100 percent stock. Moore realizes purists will criticize him for installing John Kasse Boss 429 heads on a 429 Cobra Jet block. However, these changes can be easily un-bolted by the next owner. For now, Moore plans to enjoy his 1971 Mustang in the manner in which he will have the most fun.