Parnelli Sliding Through the Dirt in His Last Trans-Am Race

Slippery as a Rock 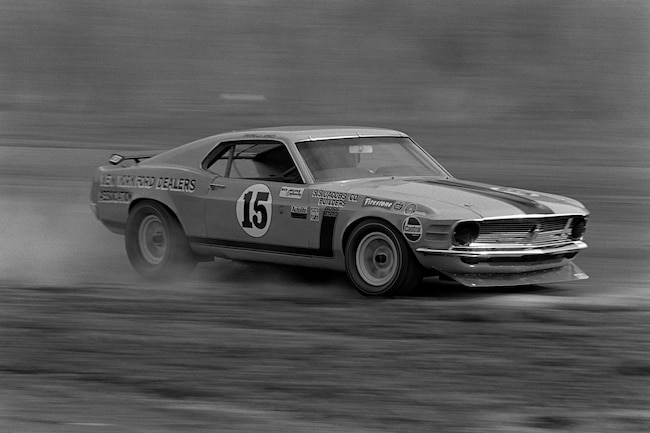 Parnelli Jones had a great 1970 on the Trans-Am circuit—five wins, five pole position starts, and only one DNF. Ford’s points superiority was significant. Parnelli and fellow Bud Moore teammate George Follmer helped fend off a renewed attack from Second Place Penske/American Motors, all in a year where examples of each of the four American manufacturer teams competed in the series.

The 1971 season, however, held something different for Parnelli. The series opener at Lime Rock Park in Connecticut was a dreary, wet affair. Average speeds dropped over 12 mph from the previous year. The slick track proved to be a particular challenge for Parnelli, who qualified second in the dry, but completed only a handful of laps before running off the track and crippling his Mustang in the rain. He would count that as his last Trans-Am entry but stayed competitive in off-road, racing Stroppe-prepared Ford Broncos before going full-time as a racing team owner.

This exceptional pan-blur image, snapped by MotorTrend’s John Lamm, captures a glimpse of the handling challenges Jones was experiencing. Four Mustangs went on to finish in the top 10, with Tony de Lorenzo’s white 1970 placing highest in Second Place.