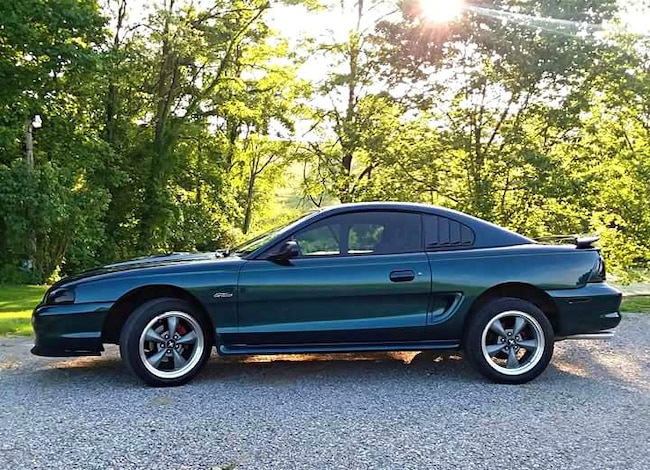 Missy Boulet started off her letter to us saying, “I'm proud to say I am a Mustang Girl” and then proceeded to explain it with photos of the many Mustangs she has owned. Missy began, “I got my love for Fords and Mustangs from my dad. He was a heck of a mechanic and would only drive a Ford vehicle. I guess that's where I get my ‘gear-head' from.”

The first Mustang she can remember was a red Cobra II that her dad bought brand new, and by the time she had her driver’s license she took her mom’s Mustang II, which had at 302 V-8 under the short hood. Missy said, “I would take my friends a ride and they usually ended up on the floorboards begging me to slow down!”

Missy has owned a several Mustangs in her 51 years but only one brand new one, a 2004 40th anniversary model, a bright yellow GT with a 5-speed. But she told us that the nicest Mustang she’s had was a 1995 Cobra, saying, “She was red and perfect—5.0 with 5-speed, tubbed, and set up to drag. She was too pretty to race.”

Missy currently owns a 1997 GT that has a few mods. It has a 4.6 with, yes, another 5-speed behind it, and she has taken this car to Myrtle Beach Mustang Week. “I have plans to repaint and change wheels with wider rear tires. I hope to hand this ole gal down to my granddaughter someday.” Also in the making is a 1985 Fox-body, which is going to be her drag car. Missy said, “It's going to take some work, but that makes it special. I prefer the older models and I love making them my own with simple modifications and add-ons. I want to keep my dad's legacy of a gear-headed, Mustang loving, Ford fanatic alive. So you see, I have the love of the horse deep in my soul.”