Garage Find: Before & After 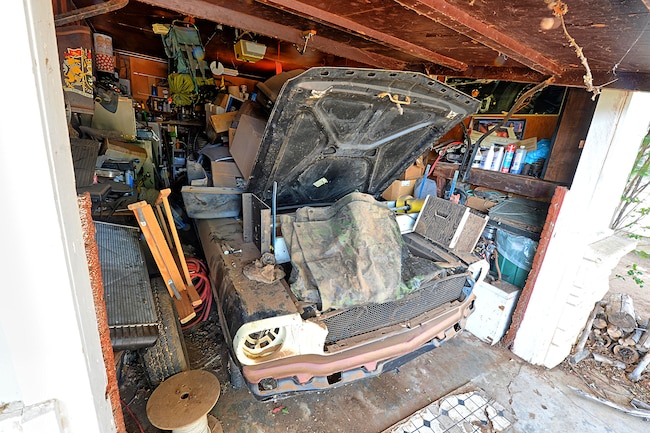 Before
“I bought this car my junior year in high school, in 1987, out of a wrecking yard,” Neil Thompson said. Thirty years later, on June 11, 2017, we were standing in front of a single-car garage attached to Thompson’s home in Lubbock, Texas. Neil was about to roll up the door to reveal his time capsule. Incredibly, nobody in his local Lubbock Mustang car club had ever seen this Mustang, but his friend Jeff Krueger had heard stories.

“I thought it was a lie. He was just trying to show off,” Jeff said with a laugh. Neil had kept this Mustang hidden most of those 30 years, parked in this garage for the last 15 years. Jeff knew a friend looking for a classic Mustang for his son and wondered if Neil would sell his hardtop. Neil did need money to complete the build of a 1970 SportsRoof, and he liked the idea of passing the baton to a member of the younger group coming up in the car hobby, so he agreed to sell it for what he called “a good cause.”

The new buyer was 14-year-old Wyatt Studer, soon to enter high school and wanting an early Mustang. This vintage Mustang would be his first car. Apparently, the deal was done, and neither Wyatt nor his dad, Bryan, had even seen the car. Neil admitted that while the sale was emotional for him, he was nonetheless pleased to sell. This Mustang had been his first car in high school, and now it would be Wyatt’s first car in high school. Wyatt could finish the project Neil started 30 years earlier.

“It’s a ’64½, a six-cylinder, automatic, plain Jane. Original color was Wimbledon White with a silver/blue interior. Somebody had painted it blue. I replaced the whole front clip—fenders, hood, headlight buckets, doors, and that’s where it sits at this point,” Neil told us.

Neil fell short on money after he scavenged parts for several years. His plan to build this ’64½ dwindled when the “Mustang bug kicked in.” He found better cars after he got out of high school and began collecting paychecks. Neil’s daily driver of many years is a modified ’66 hardtop, and the ’70 SportsRoof was underway. It was time to sell the ’64½. When Wyatt and his father, Bryan, arrived, Neil opened the garage door. Like us, they saw the car for the first time, dusty and piled with debris. “It looks pretty cool, what we can see of it,” said Bryan. Wyatt hid his emotions, but the sight of the old car, covered with debris, had to be a shock.

“It’s been in this garage for 15 years, so it has years of stuff on it,” Neil replied. Friend Jeff Krueger also showed up, and he said, “Good Lord, there’s a car underneath all that stuff.”

Rolled out into the sun and free of boxes and junk, the hardtop looked very restorable. The Studers had been advised the car needed new floorpans but was otherwise complete. Best of all, the family had Jeff’s shop behind them to do most of the restoration from start to finish. And when the car went into Vintage Autos in Lubbock, Texas, Neil would be doing most of the work. Neil is a full-time mechanic at a local dealership and works part-time for Jeff at Vintage.

After
One year and eight months later we returned to Lubbock. The hardtop had just been finished, and Neil was firing up the 200ci six-cylinder and poking a flashlight down into the one-barrel carburetor, so it was maybe 99 percent finished. Wyatt, along with his father, Bryan, and mom, Amy, had driven 160 miles from their new residence in Seymour, Texas, to meet Jeff and Neil at the shop at Vintage Autos. “Jeff has done the majority of the work, but we did what we could to help along the way—small stuff,” Bryan said. “We helped clean it up and get all the junk out, did a lot of chrome polishing, things like that,” Wyatt said. “I do a little welding, but not enough to weld floorpans in,” Bryan said.

Clearly, this was not a typical father/son project. Vintage Autos had done most of the work, and this was according to plan. Bryan said the project had been a good bonding process. He had never owned a Mustang, so the purchase and restoration were as exciting or more for him as for his son.

Amy Studer proved to be as much a part of this process as Bryan and Wyatt. She took particular interest in the interior, where she had a lot of input. The seats were red and black—the black matching the black Shelby-style stripes that Wyatt wanted instead of the more popular white stripes. For now, they stayed with the inline-six, pulling the 170ci for a peppier 200ci six-cylinder. When Wyatt gets older, they might upgrade to a V-8.

Overall, the Studers—Wyatt, Bryan and Amy—are delighted with the outcome, so much so that they are thinking about building a second early Mustang. However, this one will be for Amy, and she wants a convertible.

This photo is from June 11, 2017, when Neil opened his garage door to reveal his hidden barn find.
Bryan and Wyatt, seen here on June 11, 2017, were enthused with the old Mustang, a first for both. Price was $5,500.
“One piece at a time,” was how Neil described the best way to get the 1964½ out of the garage.
The finished product did not follow stock guidelines. Bryan, Wyatt, and his mom, Amy, selected what Mustang extras they wanted.
The original 170 was intact.
Wyatt stuck with an inline-six but went with the larger 200 that came out in 1965.
Wyatt’s interest in early Mustangs started in elementary school. “I got a Hot Wheels car, a 1967 Ford Mustang GT. From there, I just always wanted a sports car. When we first started, we were looking for a ’67 and couldn’t find one. This 1964½ was a lot better, I think.”
When we said this isn’t really a father/son project, it’s a father/son/mom/restorer/friend/checkbook project, Amy laughed and said, “It’s Amy’s checkbook project.”
The interior was originally blue, as seen here.
We understand Amy picked the interior. Red vinyl bucket seats with black inserts match the exterior color combination.
That first day, June 11, 2017, when Neil handed Wyatt the keys to his first car from high school.
This is what the 1964½ looked like loaded on the trailer, on its way to Vintage Autos in Lubbock, Texas.
Neil kept the Mustang all this time because he “really wanted to fix it.”
Jeff Krueger was overjoyed at how happy the Studers were with their project Mustang. He said, “Here at Vintage, this is what we do. We make dreams come true.”
A dual master cylinder was another safety upgrade.
The Studers had already agreed to buy the old Mustang based on Neil’s complete description. Bryan was friends with Jeff Krueger, owner of Vintage Autos, a small shop that specializes in working on old Mustangs and Shelbys. The hardtop looks good with Scott Drake Styled Steel wheel hubcaps. Shelby sidescoops, like the hoodscoop, are not functional.
The Studer family—Wyatt, Amy, and Bryan.
Most barn finds don’t get done, at least not in a year or two, but this one did. On the left is the crew of Vintage Autos: Jeff, Michael, and Neil. On the right is Bryan and his son Wyatt.