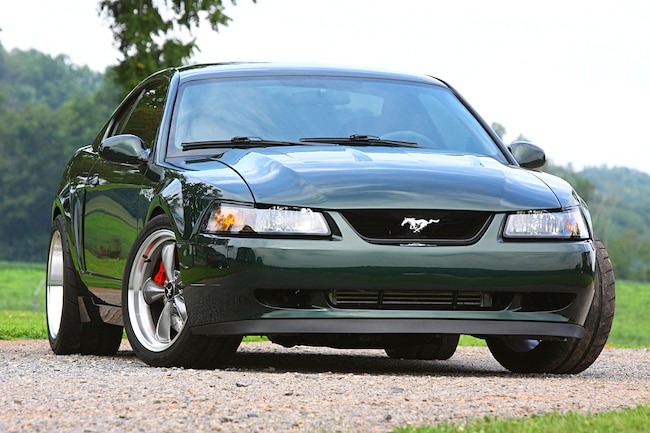 In the early 2000s, Ford drew on the nostalgia of the 1968 Mustang that had torn up the streets of San Francisco in the movie Bullitt. Steve McQueen was determined to star in a film with authentic vehicle chase scenes, and the result lives on as one of the most epic car chases ever.

Back then, engineers tweaked the Mustang GT with more precise suspension, a free-flowing induction system, and numerous retro features, including the optional Dark Highland Green paint that looked like the finish in the classic movie car. The result was the 2001 Mustang Bullitt. That car definitely struck a chord. Ford revisited the retro theme again in 2008-2009 and in 2019 with much fanfare. However, it was that first generation of production Bullitts that caught they eye of Calvin Atwell III. He just had to have one of these retro New Edges, but wasn’t able to pick one up when the cars were new.

“I really liked the Bullitts when they were introduced in 2001,” Atwell says. “I really liked the unique Dark Highland Green paint, plus the unique and retro features. I just thought it was a cool package. I couldn’t buy one in ’01, although I did buy a Sonic Blue GT in 2002, which I still have.” Eventually he loaded a Bullitt into his driveway, but it wasn’t quite the right caliber. Fans of this car know that in addition to the classic Dark Highland Green, these cars were available in Black and True Blue. Only one of these colors would truly fit Atwell’s dream machine, however.

“I bought a low-mileage, black ’01 Bullitt in 2014. I really liked that car, did a few things to it but didn’t keep it long—about eight months. Sold it to buy a fully built ’04 Mach 1. That car didn’t stay long either, about eight months also. Sold that to buy this 2001 Bullitt. What drew me to this Bullitt was that it was Dark Highland Green and it was stock, which was something I could start fresh with.”

Atwell also got the car for a song, which allowed him to invest more of his budget in upgrades. Despite how far it has come, he has still invested less in the project than if he had bought it new back in 2001.

“When I bought the Bullitt in 2015, I drove it every day for the first summer, doing the basic bolt-ons and mods. It was a fun daily. Then I decided over that winter that I was going to put a blower on it, which I found off another Bullitt on Instagram. It just snowballed from there. What started out as a simple blower install turned into a full build. I never thought I would take this car to the level it is now.”

Part of the reason it reached this level is that Atwell has a particular set of skills. He learned the love of cars from his dad at a young age. He restored his first car, a 1964 Mercury Comet, in four years with his father, who was a painter and body man. As a teen, Calvin started sweeping up at the body shop, and by 19 he was a fulltime painter. These days he makes his living smoothing panels and laying down glossy layers of paint. In fact, we showcased the fruits of his labor on our April 2019 cover (“A Notch Above the Rest,” bit.ly/2UJsMcI).

Atwell says, “I get a lot of compliments on the paintwork. People are surprised to find out that I painted the car myself. Paint and bodywork is what I do for a living.”

He carried that same attention to detail into the process of turning his former daily driver into a showstopper. Chockfull of little touches and ultraclean, it still rocks the stock Two-Valve. This 4.6L engine is augmented by a ported intake, an Accufab oval throttle-body, a Canton 7-quart oil pan, and BBK long-tubes, and is topped off with a Paxton Novi 2000 supercharger.

Backed by a Tremec TKO five-speed and running under the control of a calibration from Adam Browne at Revolution Automotive, this gleaming powerplant delivers 420 hp and 400 lb-ft of torque at the rear wheels on 13 pounds of boost. While the performance is much improved, Atwell also put a great deal of effort into the exterior. He filled in the holes in the front bumper, the emblem mounting holes on the fenders, and the antenna hole. He shaved the rear bumper cover. He also welded in Scott Rod panels and tucked the wiring harness to clean up the engine bay and added a Cervini’s 2003 Cobra-style hood.

After slathering it with three gleaming coats of Sherwin Williams Automotive Dark Highland Green paint and four layers of clearcoat, Atwell added a Mach 1 chin spoiler, 2003 Cobra mirrors, 2001 Cobra taillights, and new Ford headlights. “I’m always looking for that next little feature I can do to make the car better,” he says. “I learned a lot about suspension, as this is the first car I’ve built with handling in mind. All my other cars have been drag-racing oriented.”

“I couldn’t be happier with how the car handles and rides. It’s the best-riding Mustang I‘ve ever owned,” he says. “The car is everything I set out to build. It looks good, makes decent power, handles great, and drives well. I can take it to shows on some weekends or just out on a nice drive.”

While the reloaded Bullitt hit the desired target, Atwell isn’t quite done yet. He still plans to pack in more power, but in the meantime it will bring a smile to his face whenever he fires it up for a drive. “Right now I just want to enjoy it, and hopefully go to a few autocross events with it this year. In the next year or so I would like to build a motor for it and turn the boost up some. “

(front)
The untrained eye might just see a 2001 Mustang Bullitt, but Calvin Atwell III’s Dark Highland Green example features a number of subtle upgrades, such as a Mach 1 chin spoiler and a Cervini’s Terminator-style hood. A painter by trade, Atwell did all the paint and bodywork, which culminated in three coats of Dark Highland Green protected by four coats of clear.

(engine)
On display in a pristine engine compartment, Atwell’s stock 4.6L Two-Valve V-8 long-block wears a ported intake, an Accufab throttle-body, Trick Flow cam covers, a Canton oil pan, BBK long-tube headers, and a Paxton Novi 2000 supercharger plumbed through a CX Racing intercooler. “I wanted to keep the Two-Valve and the unique Bullitt intake, so adding a centrifugal blower was a perfect fit,” Atwell explains. “I wanted to keep it kind of basic but make decent power. I still want to build a motor for it eventually though.”

(rear)
Beneath the Bullitt resides an 8.8-inch rear filled with 4.10 gears, Moser 31-spline axles, and an Eaton TrueTrac differential supported by a Ford Performance Parts girdle. The fuel tank is from Glenn’s Performance and provides the supply for 2003 Cobra twin pumps feeding 39-lb/hr injectors.

(detail)
Riding on replica Bullitt wheels (18x9 in front and 18x10 out back) and wearing Nitto NT05 rubber, Atwell’s Bullitt is built to carve corners but deliver a streetable ride. 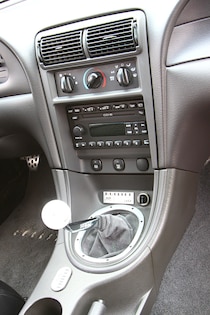