Yes, there were Mustang Mach 1s from 1974 to 1978—the full range of Mustang II production 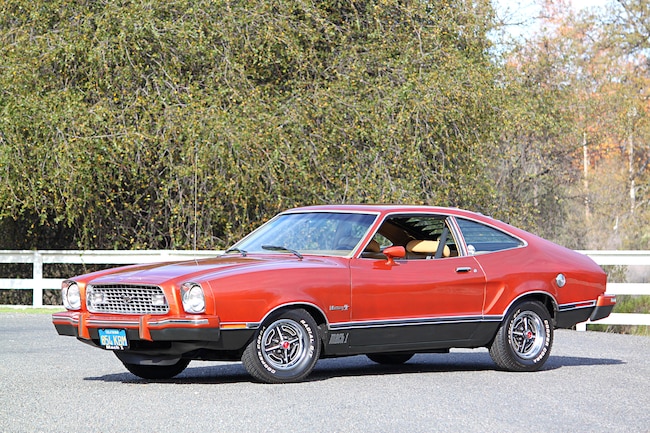 Even though the Mustang was an instant hit, and with the help of Carroll Shelby had a performance image, Ford was always looking for more. In late 1966, Ford displayed a chopped and lowered Mustang-based show car called the Mach 1—a two-seater fastback with a built-in “ducktail” rear spoiler, huge air intake scoops in the quarters, and a flip-open race-style gas cap in the roof pillar. It was a cross between a production fastback and a GT-40 race car, and it provided a preview of what was coming for the 1969 Mustang a full two years in advance.

From Mickey Thompson’s record-breaking “Mach 1” Mustang land speed race cars in the summer of 1968 through the hugely popular production Mach 1s of 1969 through 1973, and the loss of its big-block engine option after ’71, the Mach 1 was always a very popular trim level for the Mustang—a Mustang supercar for the masses. The Mach 1 name still sold well and kept the Mustang performance image alive all the way through the end of the first generation in 1973. But things were about to change.

The Mach 1 package was available on the three-door hatchback/”fastback” body style only.
Though the Mach 1 name was carried over to the downsized Mustang II, the performance image took another hit. It became more dog than Pony. With no V-8–powered Mustangs in ’74, the base Mach 1 engine was the 2.8L V-6 with 105 hp at 4,600 rpm. And in another reflection of the times, a buyer could receive a $229 credit and substitute the V-6 for an 88hp, 2.3L four-cylinder engine. The oil embargo that began on October 18, 1973, made that an attractive alternative.

Out of the 385,993 Mustang IIs that Ford turned out in 1974, 44,046 came out as hatchback Mach 1s. Surprisingly that was the highest sales number for the Mach 1 since 1969. People weren’t as interested in tire smoke as they were with having sporty good looks, fuel economy, and something that could handle some canyon curves. So the Mach 1 soldiered on as the performance-oriented Mustang for two more years until the Cobra II appeared in 1976. And like the Mach 1 had done to the GT in ’69, the Mach 1 was pushed aside while the Cobra II became the performance-image leader.

The 1974 Mustang was the only one in the car’s 50-year-plus run that you could not order in a V-8—that is, unless you lived in Mexico.
Inside, the Mach 1 received a simulated burled-walnut instrument panel; full instrumentation; deluxe two-spoke steering wheel; and low back, all-vinyl bucket seats. The optional Interior Decor Group gave the Mach 1 a Ghia image with button-and-tucked upholstery, plush carpeting, and molded door panels.

The Medium Copper Metallic example that we have here is a 1974 model owned by Bobby Aldrich. Bobby went to great lengths to find and restore this Mach 1. He had found a picture of it on the Internet a few years back, but there was no location. He assumed it was a junkyard because it was parked with other Mustangs. Interestingly enough, in the July 2015 issue of Mustang Monthly there was an article on how to buy a classic Mustang. There he found a picture of a ’69 hardtop, but Bobby noticed the nose of a brown II behind the ’69. It was the same picture (just cropped differently) that Bobby had seen a few years earlier. The article gave the location of the cars as Mustangs Etc. in Van Nuys, California.

Bobby called the owner of Mustangs Etc., Arnold Marks, who confirmed that he did have a brown Mach 1. Bobby asked Arnold if the photo in the magazine was recent, but unfortunately it was not. Arnold emailed Bobby some photos, and it was obvious the II had been partially parted out. Undeterred, Bobby wanted to buy it, and after some thought Arnold said he would sell since he had never done anything with it.

Bobby Aldrich lovingly restored his Mach’s interior with reproduction tan vinyl seat covers from Classic Auto Reproductions and N.O.S. deluxe door panels.
So Bobby made the six-hour drive from Placerville to Van Nuys to pick up his new toy. When he arrived, Bobby noticed the car hadn’t been registered since 1986. The reason Arnold had the car was because the previous owner had brought it in for repairs when it stopped running. Once it was diagnosed with a broken balancer bolt on the crankshaft, the owner sold the car to Arnold.

Once home he assessed what was needed beyond the normal full restoration. The first item was under the hood—the original 2.8L V-6 had been swapped out with a ’79 2.8L V-6, which had a different carburetor/intake combination and accessories. At that point Bobby decided to swap in a 2.3L four-cylinder engine, since they are supposed to be more reliable. He then decided he would also swap the transmission from an automatic to a four-speed.

Next was to address a large dent on the driver-side quarter. The ’74 Mustang II quarter is different than the ’75–’78 quarter due to a lower gas filler opening. The change was made in ’75 to move it up to allow for a small auxiliary gas tank to help accommodate the fuel needs of the V-8 option. Thus, no reproduction quarter-panel is available for a 1974 Mustang II. Bobby had to section a new piece in the area in front of the gas filler to do the repair. From there, Bobby went ahead and applied the new paint and added the necessary blacked-out portions. Bobby is a mechanic by trade, not a body man. He has painted a half dozen cars and feels this one is one of his better jobs, and it looks like it to us.

Inside, Bobby installed new reproduction tan vinyl seat covers from Classic Auto Reproductions. He also added N.O.S. deluxe door panels and an N.O.S. AM/FM/8-track radio. He also went ahead and mounted an underdash map light that is a ’74-only item. In relation to the ’65–’73 Mustangs, Mustang IIs are seldom restored. Even though it was the bestselling one, Bobby says the 1974 model gets even less attention in restoration circles since there were no V-8 or Cobra packages available. Thus, model-year-specific items like the header panel, hood, radiator support, front valance, and headrests, among other items, are harder to locate—and the restoration market for Mustang IIs is already exceptionally thin to begin with.

Though many Mustang enthusiasts are aware of the Cobra IIs, most forget that the high-performance name Mach 1 survived through the entire five-year run of the second-generation ponycar. And though they weren’t the street terror those early big-block Mach 1s were, the Mustang II Mach 1s offered a more understated performance image than the brash-striped, scooped Cobra IIs. The Mach 1 is an excellent example of how sometimes less is more. Or as the Ford literature said, “The Right Car for the Right Time.”

Groovy, baby! Aldrich found an N.O.S. AM/FM/8-track radio for his Mustang. We can hear Golden Earring’s “Radar Love” pumping now.
As outlined by Jerry Heasley’s “1974-1978 Mustang Spotter’s Guide” (Apr. ’19), an easy way to tell a 1974 Mustang II from later years is the gas cap, which is located beneath the body line. In1975, it was moved above the body line to compensate for an enlarged fuel tank, necessary for the thirstier V-8 that was optional again.
Four-lug Styled Steel wheels were part of the Mach 1 package for 1974.
Sport mirrors were also a Mach 1 item.
Mach 1s had blacked-out lower body panels, making the car look lower and leaner.
For all the haters out there, the Mustang II was, in fact, MotorTrend’s Car of the Year for 1974.