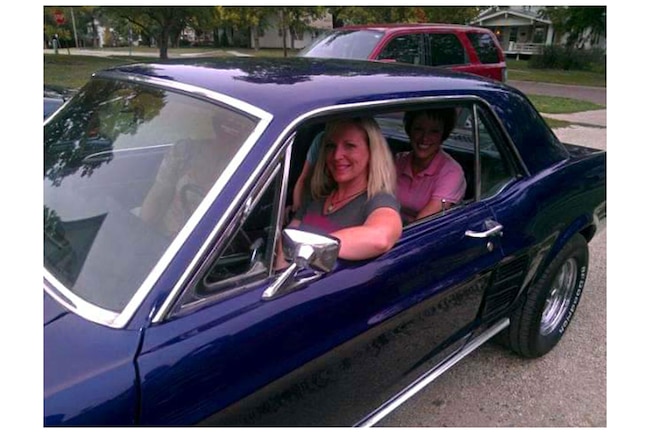 Some people build their Mustang obsession on their own, while others are “guided” by family members that are into cars. Jennifer Broadstreet Hess, from Marion, KS is an example of the latter, saying, “As a young girl I thought it was just a normal part of life to go to car shows and car lots, on the weekends, with my older brother and my dad. Dad loved to tell us stories about the 1965 pale yellow Mustang convertible he bought new, when my mom and he were just married. He sadly sold it when they decided to grow their family, and he always regretted it.”

Jennifer grew up in the mid-1970s and always loved the Mustang’s looks. She said, “I was partial to the streamlined long hood, and strength of the Ford Mustang coupe body style with all its chrome. I would tell my parents that when I turned 16 years of age, that was the model of car I wanted to buy. The summer of 1987, my dad told me he had found a baby blue-colored Mustang for sale on the edge of town in Silver Lake, Kansas. We drove out that next weekend to take a look at her. I still remember taking it out for a test drive. This ’67 pony had a rebuilt 289 engine and carburetor, rumbling dual exhaust, and was jacked up in the back with the wider tires. It had only two previous owners, with all the original paperwork and work performed on the vehicle. The first time I hit the accelerator, it peeled out, with my parents both sitting in the back of the car with me! It was love at first sight and I knew that was the car for me!”

Jennifer’s parents bought the car for $2,750 and she spent much of her free time for the next two years, working after school and on the weekends to pay them back. Her dad surprised her with the Baby Blu personalized license plate and she said, “It caught on like wildfire with my friends around town. When I wasn’t working, I would load up Baby Blu with my girlfriends. We would cruise Topeka Blvd, with the windows down, even in the winter time. My best friend had purchased a Vixen horn that played tunes for my car, and we would blare the Dixie song as we raced down the road with other cars.”

Of course, any 20-plus year-old car needs to have some work done and Jennifer’s ’67 was no different. She said, “That first year we had her, we replaced the radiator and the transmission. For a short time, before the transmission was replaced I remember having to park on an incline, or my friends would give the old Pony a push from behind; then run and jump in the car as we got her started. On brisk winter mornings, on my drive to school, the door hinges would freeze and I would use a bungee cord to strap the door handle to my car seat; until the sunshine warmed things up. I never looked at these things as problems; I always saw them as a big adventure in the new life I shared with my Mustang.”

During her years in college (KSU), Baby Blu sat outside and it took its toll on her, and after marriage and three kids, the Mustang was seriously showing its age, rust-wise. Crying herself to sleep realizing how much it would cost to fix the car (and thinking about not having it around anymore) she found a kind soul at a body shop that agreed to fix everything for an affordable price. The color is 2005 Mustang Midnight Blue metallic and her husband bought a rebuilt Jasper Engines 289.

Jennifer said, “As of this year, I’ve owned my Pony for 32 years. I’m so thankful my dad made me promise to always hold on to it, before his passing in 2006. For the most part these days, I drive Baby Blu around the small town where I live for leisure. Or take my family for a cruise around the lake and keep her garaged. I’ve had a lot of offers to buy her but will probably pass her down to one of my kids someday. Until then, I plan on driving off into the sunset with my ole sidekick “Baby Blu” and having some fun.”

You can see more of Cara on her Instagram page, chaos_gt_premium. Each week Team Mustang Girls features a different female Mustang owner. Submit your story at http://teammustanggirls.com/submit-your-mustang-story/ 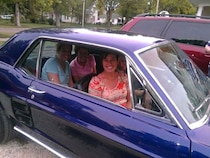