An American Horse in Norway 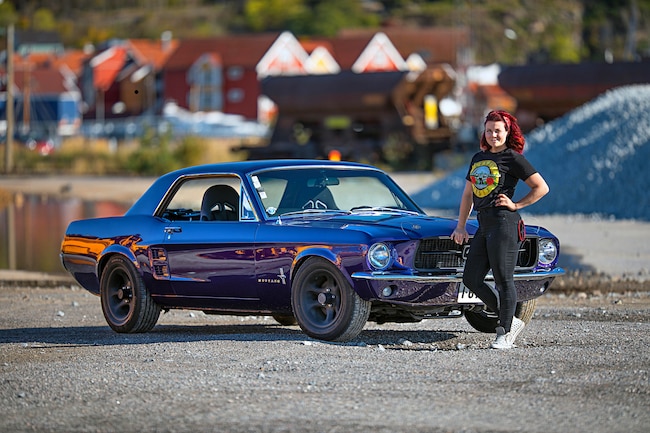 What kind of story might you expect at first glance? Perhaps an attractive young girl, who laid down some cash to buy a nice American car, perhaps influenced by her father, or could it be that she inherited a classic from her grandfather? How would she maintain such a car? Any of those would make good reading, but Kristine Jorgensen is not your typical girl. A classic car parked in the family garage never happened for Kristine. Her father is gifted mechanically but has never been particularly interested in American cars. He is a more of a point A to point B kind of guy. Even though he is highly skilled as a machinist and former CNC machine operator, he likes to spend time doing other things. Kristine admits that her father would most likely recommend a Volvo and probably not anything like a Ford Mustang. Nothing in her family upbringing seems to have any connection to her current enthusiasm for American cars.

Cruising was common in Moss, Norway and Kristine remembers the impact American cars had on her from a young age. She acquired a taste for American automobiles over time and said, “the appeal is like what most girls have for other things. The sight, sound, and smells all play into this,” and then adds “the fun factor is surely an understatement.”

Kristine enjoyed the companionship of a horse (the four-legged kind) for nearly 15 years, and during that time accumulated several championship awards. In her 20s, she decided it was time to move onto the next big adventure in life and a Ford Mustang immediately came to mind because, she said, “another horse just makes perfect sense.” Kristine was just starting to think about her new hobby when she met her now husband Ola in 2012, who had similar ideas but Kristine was already on a personal mission and focused. Ola’s 1979 Camaro was his first car and says his current 1976 Trans Am is a favorite but also in need of restoration.

With Ola’s help and after looking at a few different Mustangs, Kristine found her 1967 hardtop, but getting the car home presented a few hurdles. Prior storage issues most likely added to the breakdowns that turned the trip into a long day. A catastrophic rear wheel bearing failure brought everything to a halt in the afternoon. Terje Fjelhaug from Muroc Garage was able to do the needed repair to get them back on their way sooner than expected, but not long after and a just few miles further down the road, the alternator decided to call it quits. That’s when the tow truck was summoned for a second time, and it was back to where it all began.

The Horton Ferry parking lot was the only option left. With no available voltage and a dead battery, the back seat suddenly became “home sweet home” and soon night began to fall. Most would be discouraged, but Kristine says it was good for what she calls “bonding” time with her newly purchased car. Tolerance would be her greatest asset. Pushing the Mustang back up on the Ferry was a bit of a spectacle the next morning, but a few extra volunteers helped their embarrassment pass quickly. The plan to get the Mustang home was frustrating but the memories will never be forgotten. Roadside misery often creates great stories!

Fast forward to 2019. Kristine, now 31, can hold her own at any event and enjoys melting asphalt at the dragstrip. She is not intimidated when it comes to something like an engine teardown, and not afraid to step out of the box with a rebel yell when she needs to. With much of the story about Kristine’s strength and abilities, there is also a much softer and feminine side to her. She is very proud of her “Miss Hot Rod 2018” title, earned at a week-long American Cruise Week car event that takes place each year in Halden and ends with a large American car show at the historic Festininger fortress on Saturday.

Kristine said her Mustang was imported from the USA in 2008 and she is the third owner. The car sports MSD ignition, a Quick Fuel carburetor, coated headers, 8-inch True-Trac differential with 3.55 gears, Wilwood disc brakes up front, and a complete aftermarket suspension. The interior is original except for new fabric competition seats and a few personal touches. The purple color won approval from the start and fortunately is in great shape, so that will stay.

The biggest change for the Mustang this year will be a new Ford Performance 347 stroker small-block that Kristine acquired earlier last year from an engine builder she knows and trusts. A 4-speed AOD transmission is being considered and a new wiring harness is in the works, and eventually a new rear Posi traction differential for added reliability. Kristine says that she likes getting her hands dirty and is eager to get the car ready for the new year. “Ola is a great teacher but doing it myself is important.” With all her updates, the Steel Horse will soon to be the ultimate ride for Kristine and she will certainly inspire wherever the journey takes her next.