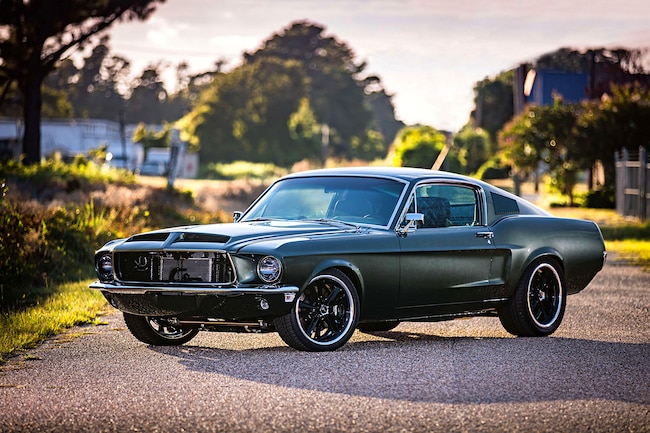 We live in a great time, especially as automotive enthusiasts. New cars are the most comfortable, technologically advanced, and the fastest they’ve ever been. They call the 1960s the glory years of the muscle car, but today is truly glorious—a new Mustang runs 11s in the quarter-mile for crying out loud, with the comforts of yesterday’s Rolls-Royce and Mercedes. Even the best of 1960s muscle struggled to break into the high-12-second range in stock configuration. But if you’re more drawn to the vintage scene, restoration and replacement parts companies make it possible to build a brand-new 1965-to-1970 Mustang from scratch, without using a single OE part.

In fact, you don’t even need a catalog anymore if you have a big enough checking account, as brand-new, turnkey 1968 Mustang fastbacks are there for the ordering. There are a few companies building new vintage Mustangs, and the latest is Innovation Performance Technologies (IPT). Based in North Carolina, IPT’s head guy, Jon Marshall, has worked closely with the EPA and SEMA to help develop specialty manufacturer legislation that allows a qualified builder to build up to 325 cars per year that are 25 years or older—meaning muscle cars like the Mustang—so long as they use an engine that meets the environmental rules for that year.

Innovation Performance Technologies’ R-model Bullitt tribute cars.
IPT saw a need in the market for the “average guy” to buy a vintage Mustang with all-new parts and those modern conveniences that make driving a pleasure, with enough power to scare the pants off the driver. Like other companies (such as Revology Cars, for example), IPT offers options on its Mustangs and has two basic models: the R and S. Marshall says, “If you want to go chase down a Ferrari and leave it in the dust, the R model is the one to get. It rides like a go-kart, handles like a Ferrari, and brakes like a Porsche, but if I was going to drive one every day, the S model is more enjoyable and has more creature comforts. We make them as quiet as possible, and it’s a very comfortable daily driver.”

Officially, the car is called the GT Sport model that has nostalgic, vintage looks but with a modern twist. Starting with either pristine original or all-new sheetmetal, the S model is outfitted with a complete Maier Racing suspension with Wilwood six-piston brakes up front, a T-5 five-speed or C4 automatic, and a 302ci pushrod engine with FiTech fuel injection that makes in the neighborhood of 400 hp. Of course, there are options to personalize it, and modern creature comforts like air conditioning, Recaro leather seats, and more are standard. Marshall says, “The only bad news on the modern aspect is that you can’t get airbags. We can make it work, but it would cost us two to three million dollars to get that all in place from a production standpoint.” The base price for the S model is $78,000, which is the same as a new F-150 with a few option boxes checked. As Jon says, “You can buy a brand-new Explorer or one of our S models.”

This is the IPT GT Sport model done up as a Shelby G.T. 350 tribute.
Taking Mustang performance a giant leap forward is the R model, with a 600-plus–horsepower Roush-supercharged 5.0L Coyote engine and a TKO-600 five-speed manual transmission, more aggressive Wilwood brakes, and a Currie Fab9 rearend with a Detroit Locker diff and 35-spline axles. The suspension is also Maier Racing bolt-on parts with coilovers all around, Foose Design wheels, Recaro leather interior, Dakota Digital gauges, and just “more” everywhere. The R model shown here is IPT’s Bullitt-style fastback with Highland Green paint, naturally, and its base price is north of $125,000.

Marshall and most of IPT’s crew are also seasoned racers, proving the cars in competition. Elsewhere in this issue is the story on the Laps of Honor team that Marshall built to race in honor of veterans, using the “Rustang,” which is essentially a GT Sport (S model) under all the patina and with required safety equipment for racing. That car was beaten like a rental on a daily basis and held together like a champ.

If that price tag is giving you sticker shock, add up what it would take in parts to build this car yourself, and then factor in the labor and time on top of that, and it brings it more into reality. Or, just go down to your new-car dealer and see what new cars and trucks are going for with a few options added. Would you rather have an Explorer or a new 1968 Mustang? We’ll opt for the latter, thank you very much, and IPT fills that need perfectly. Want one? Check out IPT’s website at: innovationperformance.tech.

The S model is built more for daily driver duty, with an old-school pushrod 302 engine that makes 400 hp. There’s a FiTech electronic fuel injection throttle body under that traditional air cleaner, a C&R Racing radiator to keep it cool, and Old Air Products air conditioning.
To keep the costs more reasonable, IPT went with bolt-on suspension from Maier Racing.
Super comfy Recaro leather and cloth seats, air conditioning, Custom Autosound stereo, and in this case a T-5 five-speed make the driving experience fun but livable, even if you wanted to make this a daily driver.
Poking out of the US Mags (wrapped with Continental ExtremeContact tires) are Wilwood six-piston calipers.
The R model takes things to a whole ’nother level, with a Roush-blown Coyote 5.0L that makes 600 hp and requires a more serious suspension setup just to allow all that engine to fit in a tight Mustang engine compartment.
The Bullitt tribute has more luxurious Recaros, Dakota Digital gauges, and a TKO-600 five-speed as the only option.
The bigger engine in the Bullitt requires a more serious fuel system with an added-capacity Rick’s Tanks tank and pump. A Taylor box holds the trunk-mounted battery.
The more aggressive green car uses a Total Control front clip and this pushrod rear suspension. ProFab custom stainless steel exhaust wraps around the suspension and exits under the rear bumper where it should.
Two flavors of Mustangs—one a radical Bullitt clone and the other a more drivable Shelby tribute for the price of a new Explorer. Take your pick.