ON THE BLEEDING EDGE 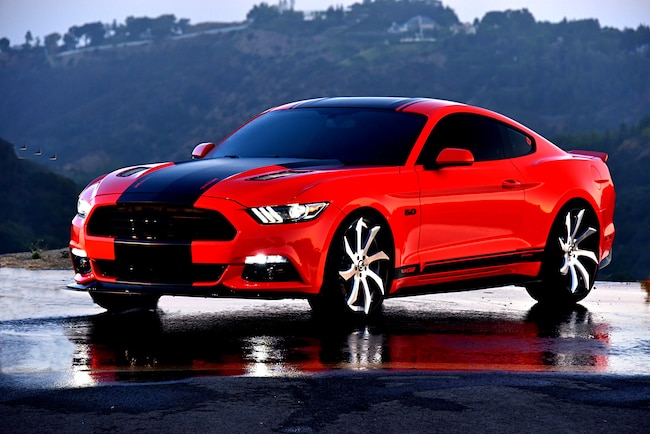 Modification of the latest Mustangs falls into a formulaic pattern. Nobody knows why really but most of their owners are enamored of the same mechanical, electronic and styling modifications like they were preordained; the difference is how detailed these modifications become. Some are happy with the rudiments, starter kits if you will, while others see their future in refinement and in details defined.

Troy Gallagher’s one of the latter group because Troy Gallagher’s been at this stuff for a long while: “This is my tenth Mustang but I’ve owned Fox-bodies, S197s and more. I bought this 2015 GT and made it from years of experience with Fords.” How’d he do that? He devoted most of the past two years and he sluiced plenty of coin in this one. He likes it. Listen. According to him, it rises up and thunders every time and is as loyal as bark is to a tree. No doubt it accelerates quickly, but Troy went on to say, “it’s super fast and smooth.” He mentioned that it’s a “very smooth horsepower-to-weight ratio when going through the gears.” Then he said what he really felt: “Turn the key and go fast.” We’re not even talking about the elevated electronic enhancement surrounding the cockpit, the body bits he added or the suspension uplift that accompany the grand scheme.

Inside features a Viper Tech Tesla 10.4 touch screen with a sea of leather on the door panels, the heated Recaros and overlapping the GT350 steering wheel. Manny’s Upholstery in San Bernardino did all that. To stick it with a bit of drama, Troy provided ordered LED lighting under the driver’s side of the dashboard because it synched with an LED display under the car.
From the start, Troy contemplated forced induction so he had the already potent 5.0L stripped down to its internals by the lads at Spankin’ Time Motoring in his hometown San Berdoo. The S550 crank and rods are forged but the pistons are not and were exchanged for much stronger Mahle slugs that maintained the original 11:1 compression ratio. Spankin’ thought Comp camshafts would be amenable to the blower power curve and just the ticket for the forced-air conversion: 0.516/0.514-inch lift; 239/245-degrees duration at 0.050. The sump is original but the oil pump gears were upgraded with TSS billet internals.

Enabling the process are the original flywheel, a Centerforce dual friction clutch assembly and Tremec six-gear guided by a short-throw shifter. The DSS carbon fiber one-piece driveshaft is 28 pounds lighter than the OE piece and makes the whole with a Performance Package axle holding 3.73:1 gears, Torsen differential and Ford Racing 31-spline shafts. The big factory Brembos were left intact.

The Spankin’ Time boys drew down on a whipple supercharger at 11psi, and armed it with a billet 132mm throttle-body, Injector Dynamics squirters and JMS Boost-A-Pump. Stainless Works long tubes dumping into Magnaflow silencers caught in a three-inch system. When they tweaked it with a SCT X4 tuner, they saw 662 horsepower and 532 lb-ft.
Since the chassis has been factory-engineered to deal with the guff, the bones needed to support the mayhem are minimal: Eibach 1.25-inch drop springs and anti-sway bars, Boomba Racing rear vertical links and polygraphite bushings everywhere they should be. The frictional coefficient is a 22-inch production, as in those polarizing Forgiato Fondare-ECL, 9- and 10.5-inch hoops wrapped with Nexen Roadian HP 265/30 and 295/25 rubber.

In the money room there’s a grand display, a panoply of creature comfort, high-tech and luxurious surroundings. When he isn’t busy being the pilot, Troy’s busy keeping up with the information bank provided by his company Audio Extreme.

The S550’s big wheels and Competition Orange coating are loud but tempered by minimal appointments that include Carbon Creations splitters streaming down the sides, then an APR splitter under the APR spoiler. The back of the car is blocked out with a Roush rear valance.
As Audio Extreme’s tax-write off, the Mustang goes from being a hot car to a hot rolling advertisement and Troy drives it, all over California, over to Las Vegas and many places in between. As a promotional instrument, it has to be reliable and it has to be accommodating, but he doesn’t drive it to work and back and he really has no time to joy ride. But he always makes time to hang with like-minded individuals in the Extreme Stangz Inland Empire chapter.