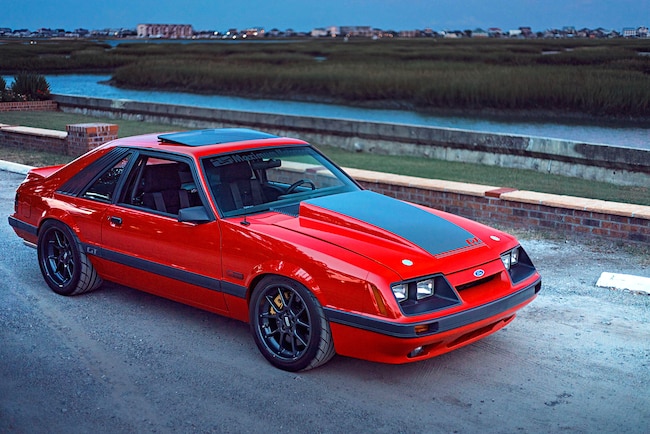 A lot can happen in 20 years. Fads and trends come and go, and what was once new and vaunted descends into the realm of dated and unwanted, replaced by the newest model and the latest and greatest. People grow up or grow old, interests change and what was once the center of your world is suddenly just not that important anymore...and project cars, even the most cherished gems, the ones we swore we’d never sell...get sold. Sad yet? Don’t be, because thankfully, none of this applies to Tony Frank’s flawless ’85 GT. It’s as fresh as it once was and he still owns it to this very day—but it just as easily could have gone a more unfortunate direction.

“This car has been with me since high school, through college and into adulthood—it’s been with me for so many ups and downs and there’s just so many memories wrapped up into it,” Tony said. Like most Ford fans, you’ve got to wind the clock back a bit to fully appreciate how deep these blue-oval roots extend.

“My dad had several ’69 Mach 1s when I was younger that got him into some trouble, as did my mom who’d sneak them out so we could do burnouts—I guess you could say I started young,” Tony said.

Knowing that octane was in his veins, like any good father, he knew the best way to keep his teenager focused was to preoccupy him with a project car. And so, Tony’s first Fox was a father-son car that touched 11s.

It takes a village to build a car this clean, and Tony would like to thank Sean Ungvarsky at the Shred Shop, Joe at Innovative Parts and Repairs, Doug Aitken at Prestige Motorsports, the entire Maximum Motorsports team, and most importantly, his dad for being his motivation and savior through the entire build.
While the aforementioned drag car was the official beginning to Tony’s Fox-body obsession, we’ve got to rewind the clock even further for the beginning of this ’85 GT’s story. You see, Tony’s father, Glenn who worked at the Ford Myland Plant as a machine repairman was approached by a friend in 1985 who wanted to buy a Fox-body Mustang, but was unsure how to spec it. He asked Glenn how he’d order it...and then ordered that exact car.

“My father told him to get an ’85 GT because it was still carb’d, and that he’d add the sunroof but delete the A/C and power amenities, and that it had to be Jalapeno Red—he ordered the very car,” Tony explained. Over the next 13 years that GT amassed just 13,000 miles before Tony, a then high schooler set out looking for the perfect Fox. Crazy enough, he passed on this car at first...only to return a year later after a fruitless Fox search. Thankfully, by the time he circled back around, his friend still owned it and happily sold it to Tony.

Of course you know he didn’t leave it stock, as he rocked some 16-inch OG Prime wheels, a cowl hood, exhaust, an E-cam and other mods of the day. Tony continued to enjoy the car until it was parked...for a long time.

“It sat in my parent’s garage while I was in college and even after I graduated...thankfully my parents didn’t push me to sell it, but there were times I nearly lost interest in it,” Tony said. And this my friends, is where many stories take a turn for the worse. But instead of selling it, Tony had it shipped to him in Arizona...except, he wasn’t out of the weeds just yet. “In 2015, I’d just lost interest, so I towed it to the Fabulous Fords Forever show (FFF) to sell it,” Tony said.

Talk about continuity; notice that the rare BBS RK wheels, with modified pad-height to fit a Fox match the trim color? Yep, that was planned, as was all the other accents under the hood that are powder coated in crinkle black to match the finish of the Maximum Motorsports suspension pieces.
The car was still flawless, tastefully modded and had low mileage, 21,500 to be exact. In the end, the only thing that saved him from selling his beloved four-eye was a mere $1000. “As I walked the show I realized just how rare clean Foxes are, especially for-eyed cars, and suddenly I wasn’t going to take anything less $15,000...the guy that offered me $14,000 asked me in disbelief if I’d lose the entire sale over $1,000, and I’m thankful I did,” Tony said.

So what did he do next? Well, what went down is something born of Blue Oval folklore…but we’d be remiss if we didn’t say he was out of the woods just yet. “That was April of 2015, in May of 2015 I started my build thread and the saga didn’t end until April of 2018—I’d be lying if I said it was easy, it wasn’t,” Tony said. What happened next started simple enough...but quickly ignited into a Jalapeno Red inferno.

“I was just going to do a North Racecars five-lug swap and add full Maximum Motorsports suspension...but before I knew it the car was sitting on dollies without a motor or suspension and I was thinking, well, now what?” Tony said. What happened was a full rebuild from the shell out...you read that correctly, not a single nut, bolt, fastener, clip or the like was left untouched...in fact, nearly every bolt on the engine, chassis and wherever possible was replaced with a polished stainless steel hex-head bolt...yeah, this car is good down to that level of detail.

First he threw the entire Maximum Motorsports book at it in the form of the Max Grip Box. He then decided that a proper pushrod motor was next, but not just any pushrod. “Prestige Motorsports built one of my favorite parts of the car, the rowdy 363 cubic inch SBF that zings to 7000 rpm and makes the hair on the back of your neck stand-up,” Tony said. It all started with a Dart SHP block that was filled with an internally balanced Eagle forged crank an H-beam rods, 10.5:1 JE pistons, a custom Comp cam and AFR 185 Renegade heads with Scorpion 1.6 roller rockers. An Edelbrock Performer RPM Air Gap manifold, two-inch spacer and a Quick Fuel 650 carb helps with the top-end surge.

Note the CNC milled Maximum Motorsports fender badges that replace the 5.0 emblem. Tony said they pay tribute to the Fox Saleen cars that called out Racecraft suspension, but instead pays homage to the MM suspension.
But wait, there’s more; like an MSD billet distributor, 6al and Blaster SS coil that’s mounted inside the car with the coil wire going to a bulkhead on the firewall...did we mention it also has a wire tuck, nearly invisible brake lines and a super-sano engine bay? “I decided to weld and smooth the bay, added Scott Rod panels, Maker’s Garage scuff plates and stuck to with a simple scheme to keep it clean but classy,” Tony said.

At about this point, with the car in a state of disarray, so far from completion but too far to turn back now, Tony started having build fatigue so fierce he again contemplated selling it as-is.

“I again found myself at a crossroads, as I didn’t see an end in sight...but just as I was about to give up, my father flew out for a month; without his help, the project wouldn’t have moved forward,” Tony said.

Seeing the progress his dad made while he was at work and the progress they’d make together in the evenings was enough to keep him motivated for a few more months.

Note the custom 3-inch tailpipes that actually clear the panhard bar. The entire system from just after the Doug’s 1 ¾ headers with 3-inch collectors is a custom 3-inch X-piped system with Dynomax mufflers built by Innovative Parts.
The additional progress in the wake of his father’s visit brought a hefty fuel system comprised of Glenn’s performance, Fore, Walbro and Aeromotive components.

Just as he was digging into the rest of the drivetrain with a Ford Performance aluminum flywheel, McLeod RST clutch, Quick Time bellhousing, Astro Performance A5 transmission and Steeda shifter...reality again hit.

“I hit overwhelm again, and just as I was grinding to a halt, my father flew out and got the project moving again...it was the best of times and something I’ll never forget,” Tony said.

With the 2018 FFF show just around the corner and still lots to do, they buckled down and made the push.

The 363ci small-block not only looks good with the right color combo and a clean bay, but it sounds wicked and is rowdy enough to spin to over 7,000 rpm thanks to 10.25:1 compression, AFR 185 heads, a custom Comp cam, Eagle forged rotating assembly, JE pistons, and a Dart block.
“I added the 4-inch cowl hood with Quik-Latch hood pins, the shaved wipers and cowl, the 18x8.5-inch front and 18x10-inch rear BBS RK wheels and the Sinis Built powdercoated Cobra brakes,” Tony said. But as good as the exterior and the engine bay are perhaps the interior is also another shining achievement that’s easily overlooked.

“I wanted the interior to match the exterior in it’s cleanliness and simplicity, so I added a suede headliner and visors to match the Corbeau GTS2 seats,” Tony explained. Other noteworthy bits from the interior ensemble include a Maximum Motorsports rollbar, Scott Rod rear seat delete, a Grant steering wheel and a Florida50 gauge panel with AutoMeter gauges. Sleep-deprived and unsure of what to expect, Tony and his father made the trek to Sunny SoCal for the show.

“I couldn’t believe how many people appreciated the car; I didn't built it to be flashy, just something simple and clean, and to have that many people appreciate it, was validation for all our hard work,” Tony said. Sure, the kudos on what is widely regarded as one of the brightest Fox-body stages in the country are worth their weight in gold, but what happened next wasn’t just special, it was priceless.

“After the show my dad and I hopped in the car and cruised down the coast, just enjoying the experience and re-living the entire build, all the years it sat in the garage and even how my dad had been connected to the car since 1985...that cruise was one of best moments of my life, and quite honestly, the real reason why this car means the world to me, because of the memories we made together.”

While it’s easy to spot the suede Corbeau seats and shift boot, success is in the details, like the factory 1985 premium stereo, the OG Grant steering wheel and all the intricate details—he sweated the small stuff, and it shows!