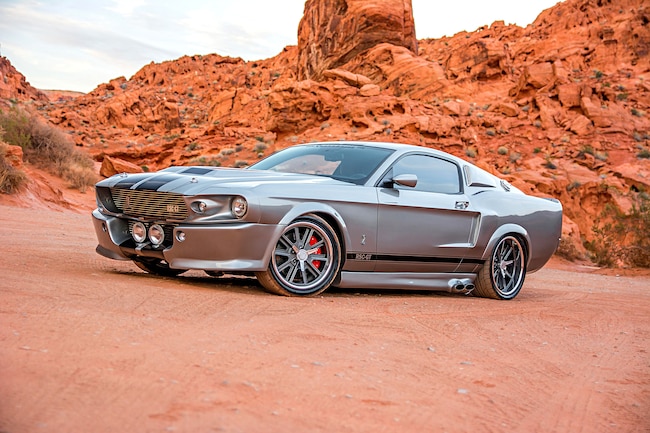 Cowboy hat, Texas-sized smile, and enthusiasm for days. We could be talking about Burt Reynolds, but we’re actually describing Mustang and hot rod enthusiast JC Fisher. Spend a little time with JC, and you will be reminded what hot rodding excitement is all about. We were fortunate enough to get to spend a few days with JC and check out his newest obsession.

An important side note here is that JC is a member of The Texas Tenors, a singing group that took second runner-up on America’s Got Talent in 2009. At the time this article goes to press, The Texas Tenors will be competing once again on America’s Got Talent—The Champions. JC’s singing group has built a large, devoted following worldwide. He tours constantly, and JC’s love of singing has put him in a position to build the Mustang he has always wanted.

JC Fisher’s RSC-GT was built in a pseudo-Eleanor fashion, combining early- and late-model Mustangs to create a unique ride he won’t see next to him at a stoplight. The side exhaust comes from Cervini’s.
As the son of a farmer in Southern Missouri, he had his share of trucks and Fox-body Mustangs. His black Fox-body convertible got him through his college years, but like so many of us, he had bigger automotive aspirations. Much like the rest of us, JC’s dream Mustang build had to fill his need for speed while creating a “sensory overload” for the eyes and ears. With a love for the classics and a passion for modern performance, a modern take on a vintage Shelby seemed like the way to go.

JC’s vision took shape when he met Clinton White from Retrobuilt Motors in Nixa, Missouri. Clinton has made his mark building late-model Mustangs to look like vintage ponycars. When Clinton told JC he was thinking about building a restomod to look like a 1967 fastback, JC jumped at the opportunity to be a part of the pioneer project. Plans began to take shape immediately, and after honing in on what JC’s final vision was, Retrobuilt set about working its magic. The Retrobuilt RSC-GT was about to be born.

The donor car was a low-mileage 2011 Mustang GT Premium. To achieve the vintage appearance on the outside, the body lines on the 2011 had to be adapted to reflect the glory of the ’67 fastback. Retrobuilt attached its fiberglass quarters and fenders. The doorskins have to also to be adapted to work with the rest of the body. All in all, the RSC-GT received 18 modifications to the factory Mustang body. The roof is the only factory body line left after the Retrobuilt crew worked their magic. Sitting inside the car and looking out the sideview mirror, it’s eerily similar to the vintage fastback it’s intended to be modeled after.

Perhaps one of the most eye-catching aspects of the build comes with the front end. Retrobuilt creations are notorious for causing even the most discerning vintage Pony fan to take a second look. If it were to go quickly past you down the street, you could easily assume you saw a vintage masterpiece.

Being a fan of Ford’s Coyote, JC knew it would be easy to extract enough power from the stock drivetrain; he decided to hit up the good folks at ProCharger, and the company set him up with its D-2SC system specifically designed to hurl the RSC-GT down the highway with the proper amount of authority. Coupled with a 150-shot nitrous system, the goal was to reach the 850hp mark. To achieve this, the ProCharger system was finely tuned and matched with Kooks long-tube headers and a Cervini’s side exhaust system, not to mention some bigger Bosch injectors.

Want to crank your favorite tunes while you cruise? Got that covered too. Clinton White from Retrobuilt will tell you he is a car guy, so when it came to the audio portion of the RSC-GT experience, he yielded to JC’s vision. Enlisting the folks at LIS Audio in Kansas City, JC’s vision of sonic mastery to accompany the music coming from under the hood is a work of art in itself. The entire trunk of the RSC-GT has been converted into the enclosure for the Audio Dynamics 1100 Series subwoofers starting with a healthy dose of Hushmat sound deadener. They even made sure the NOS bottle was well accommodated, and it looks right at home along with the Audio Dynamics (AD) 6-channel amplifier. Up front, the audio system is complemented by two sets of AD 3200 Series component speakers housed in two custom speaker pods. Whether you want Whitesnake or the latest CD from The Texas Tenors, this system has you covered.

Your author was lucky enough to pilot the RSC-GT car through the desert of Nevada. Considering the fact that this thing is one part classic cool and one part modern muscle, it’s hard not to have a total blast rolling through Nevada’s Red Rocks or Valley of Fire. Climbing behind the wheel is kind of like lacing up your favorite running shoes. You know you’re about to go fast, and you’re going to do it in style. The exhaust note is enough to disrupt the thought patterns of any coyote or roadrunner in the middle of their business.

Driving the RSC-GT is a surefire way to ensure that you will never reach your destination on time. I was besieged with visitors at every stop I made. The double takes that you witness when people try to figure out if they are looking at a restored classic or modern street machine are priceless. I spent a lot of time explaining what I knew about the Retrobuilt process. The creation of the RSC-GT started with Retrobuilt’s Clinton White, but JC Fisher’s determination to build his ultimate Shelby tribute has unleashed an incredibly stylish, muscularly unique, and modern street machine that retains the classic styling that made the vintage G.T. 500s famous.

The 5.0L Coyote sees a significant increase in horsepower thanks to a ProCharger D-2SC and a 150-shot of spray. JC’s commitment to details and refinement certainly did not stop at the engine compartment. Check out the custom hydro-dipping.
That’s right—it’s functional. The fuel inlet on the Retrobuilt RSC-GT is located where it is supposed to be.
Custom-made two-piece wheels from American Racing mated with 18- and 20-inch (front/rear) Nitto NT555 tires make for an awfully mean stance.
The interior is stock 2011 Mustang GT but with an upgraded stereo system.
The entire trunk was coated in Hushmat sound deadener, and it is now an enclosure for the Audio Dynamics 1100 Series subwoofers.