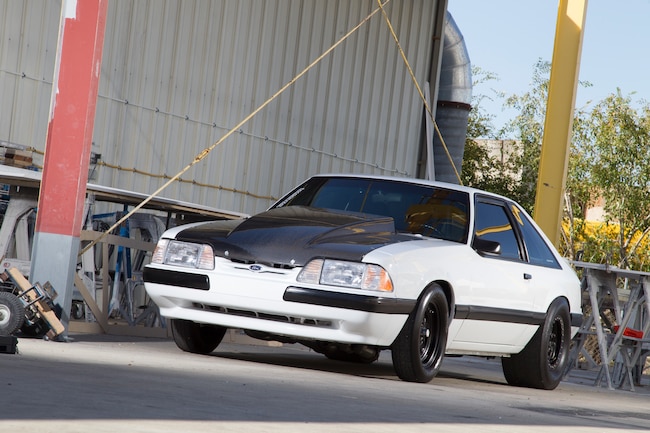 There was a time when the guy with the best math on his timeslip was king. Now, the cool kid is the one who lit the win light and pocketed that same scorecard, never to be seen again. This no-tell tactic is the result of the rise of No-Time (also known as Lights Out) drag racing. Two cars go down the track, one win-light illuminates, then on to the next pair.

It’s exciting to watch and its as much a head game as it is a challenge to build the faster machine. Tony Politano, and his Fox-body, Snowflake, are dead in the middle of the scene and timeslips or not, they’re getting noticed. I’ve always like Mustangs,” said Politano. “I bought a 1993 LX in 1998. I crashed it and was on the hunt looking for another one and that’s when I found this car, a 1991 LX, white with black interior.”

To say the car has been through a few changes would be an understatement. It’s had more than its share of engines, transmissions, suspensions, and more - always in the quest to go faster! “It ran 13s back in the day, which was fast at the time, and I’ve gone faster as its transitioned from a street car to a race car,” said Politano. “Really it was a street car most of its life but it doesn’t see any street miles anymore.” The original engine in the Fox was the factory issued 8.2-inch deck 302 Windsor when Politano brought it home. He ran that setup for a few years before stepping up to a supercharged 9.2 deck Windsor platform. In its current iteration, the car is powered by another 9.2 deck Windsor augmented by a healthy 450hp of Nitrous Express fogger.

The block is from Dart and was machined by Pettis Performance to displace 408ci engines via a 4.165-inch bore and 3.75-inch stroke. Up top, Brodix Track 1 heads ported by Kuntz and Company work with a custom .940-inch lift Comp camshaft, Manton pushrods, and T&D rockers to move the air/fuel combo. Lastly, a CHI intake and 4150-style carb top the motor. Power management for the car, done by means of ignition timing, is tuned by Eric Mitchel. Politano estimates 500-600 horsepower to the wheels on the engine alone and 900hp on the bottle.

“It’s been an ongoing build for 20 years and the combination has always changed,” said Politano. I’ve crashed the car twice, I’ve done big wheelies in it, I’ve 60-footed in the 1.10 range. I’ve done a lot in the car.” Behind the engine is a Protrans Powerglide transmission with a 1.69 first gear and a Cameron converter. An 8.8 Ford rearend with Moser axles spun by 4.30 gears send power to the ground, while forward bite comes courtesy of a Team Z rear suspension with Menscer shocks at all four corners. Murray’s Performance garage in Lancaster, California did the fabrication work on the car.

The overall combination has evolved to a point where it’s extremely competitive, and much like the hardware, the racing landscape has evolved too. Politano used to race the car at PSCA and NMCA West events but as those series dried up, he looked for new places to race competitively. “The racing has really changed on the West Coast,” said Politano. We currently race the car at Boddie presents events in the limited small tire class, where the team is still hunting for a class win. Like the name suggests, the class is predicated upon a spec tire, but has little other rules in terms of weights and engine combinations. It’s a wild-west, run-what-you-brung type showdown that Politano, and many others, can’t get enough of.

“Its gone rounds, its gone to finals, its won a lot of races in its time,” said Politano. “We’re just trying to get it faster on the radials.” For Tony, racing is only half of the fun. “I have such a great group of people that come out and support me at the track,” he said. “My girlfriend, Tess Wood comes to the track with me whenever I go, she’s part of my crew. Also, Joseph Pelayo, Kelly Henry, Brian Parks, and Eric Mitchell. I guess the car just introduced me to a lot of great friends and that’s the most important thing. We’re going to continue to go no time racing. It’s a radial car and we’re just going to keep getting faster.”

While Snowflake has evolved into a dedicated track car, it still sports a full interior with a carbon fiber racing seat from Unlimited products and a Racepak digital dash.
Snowflake’s beating heart is highly developed and functional, but not out of the reach of most sportsman racers. A 4150 carb sits atop a 408ci engine and a beyond-healthy shot of N2O from a Nitrous Express fogger provides the grunt.
Snowflake has been a lot of things in its life, ranging from a street cruiser to a street bruiser. What will it be in its next life? Who can say? 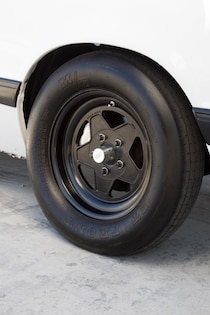 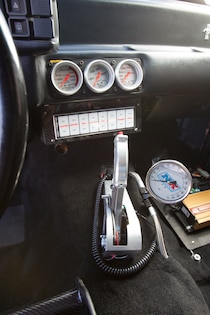 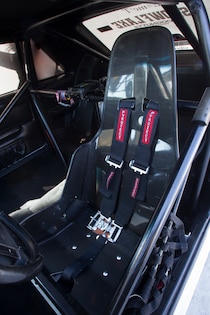 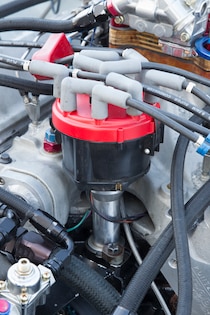 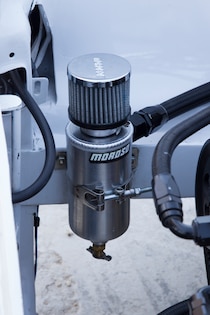