Dark Horse Customs’ Madd Maxx is not overbuilt, but it is 100% badass 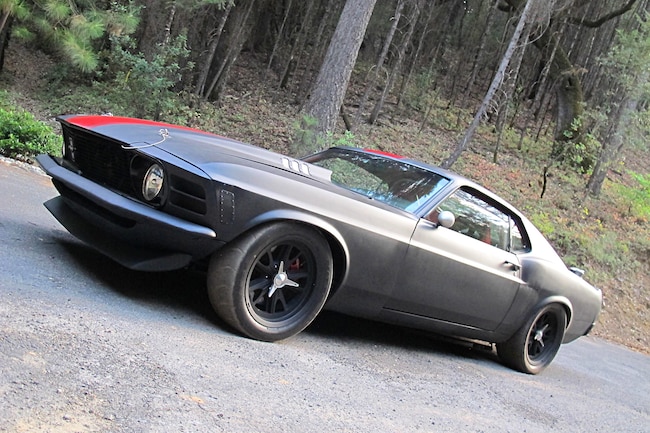 The term “restomod” was coined by former Mustang Monthly editor Jim Smart in the mid-1990s to describe those cars that have been built to the owner’s specifications and desires with a combination of stock and aftermarket performance and appearance parts. Meaning, say, a 1965 fastback with a stock body but maybe a hotter engine, modern overdrive transmission swap, aftermarket performance suspension, and perhaps modern conveniences like air conditioning and a sound system.

Jim said he “was looking for a name to call mildly modified Mustangs without calling them modifieds. At the time, ‘modify’ was a sacrilege. Restomod has since broadened in scope to where anything modified is considered a restomod.” He’s not kidding. With the explosion in technology that the world has seen just in the last five years, building a high-tech, electronic, thrill show of a Mustang that does things that could not have even been conceived of 20 years ago is relatively easy. That’s why a lot of Mustangs are built so over the top that it makes them unobtainable for the average enthusiast. In the July 2019 issue you will see a gang of features on some of these high-end, pro-built Mustangs that truly defy the imagination. While those cars are works of art that feature state-of-the-art craftsmanship, they are aspirational—those of us building cars by ourselves at home have very little chance of creating such masterpieces.

And that’s precisely why we are digging Dark Horse Customs’ (DHC, darkhorsecustoms.net) Madd Maxx, a 1970 Mustang SportsRoof that DHC’s owner, Warren Croyle, has owned for a long time. Whereas more than a few Mustang restomods these days get a Coyote swap, DHC stayed with a traditional pushrod Ford engine, albeit a really big one. The car also eschews a high-dollar custom paintjob in the latest candy and metalflake chemistry. In fact, we’d call this Mustang a “20-footer,” meaning it looks good from 20 feet away, but when you get closer you notice all the battle scars and questionable bodywork that make it anything but a show car. But that’s the point.

It comes by those battle scars honestly, having served as Croyle’s daily driver and occasional movie studio rental car, having been rented to the studios for various productions where it was used in the background. The abuse from stuntmen and legendarily horrible Southern California drivers has left the body bruised but still intact.

“It’s been hit a bunch of times,” Croyle said. “A dumpster actually punched the hole in the rear pillar.” At one time he had thought about turning the car into a Boss clone, but once he started working on the body, he realized that he liked his Mustang just as it was and decided to leave it alone and build it the way he wanted to—car show crowd be damned. “I just couldn’t bring myself to change it. I loved it the way it was, so we just went with that.” The satin-black finish with satin red stripes and blacked-out trim pieces give it the murdered-out look of a traditional primered hot rod, but underneath the sheetmetal is a different story.

This car is a mule of sorts for DHC for testing out different parts and combinations for future customer cars, and Croyle is not afraid to beat on it like a rental. The current engine combination is a 385-series big-block, a 460 that has been bored to 4.390 inches and stroked to 545 ci with a 4.500-inch stroke crank and is topped with Trick Flow heads, a Comp solid roller cam, and a Holley 950-cfm carburetor—yes, a carburetor—no fancy aftermarket fuel injection needed here. It all adds up to 800 hp at 6,400 rpm and 844 lb-ft at 5,400 rpm, more than enough to shred the Nitto NT01s at will, as you can see in the video here. This current Madd Maxx setup has been perfected and will be emulated in DHC’s new “545 Legend” series production cars. Croyle says they typically choose 1969 Mach 1s (but sometimes non-Mach Sportsroof models) and that “all cars are built to perfection in the same way my hero Carroll Shelby did. Our end product is a tribute to Mr. Shelby and my other hero, Richard Petty, and our cars combine those extremes into our own style.”

The suspension is likewise heavily upgraded, but you won’t find a fancy IRS or rocker-arm suspension trickery on Madd Maxx. Global West front upper control arms and boxed lowers, and a Heidts adjustable four-link in back, work with adjustable QA-1 coilovers all around to tighten up the suspension without adding complication and the necessity of fabrication. A Flaming River rack-and-pinion provides point-and-shoot steering precision.

Madd Maxx will most likely remain in Croyle’s shop for years to come, even if it is no longer pressed into daily driver status. DHC builds variations of fastback Mustangs for customers, using Madd Maxx as a development mule at times, and the shop is experimenting with adding a Coyote swap to the option list, but as Croyle said, “The focus moving forward will remain dedicated to enhancing the classic Mustang without losing its essence.” In other words, a true restomod.

Flat black paint, a satin red stripe, and a Le Mans–style pop-open gas cap say this is an all-business machine you probably shouldn’t mess with on the street.
The 545-inch big-block earned its cubes from an Eagle H-beam rotating assembly. With Trick Flow C01 325 cylinder heads, Comp Cams cam (with 288-duration and .532-inch lift), a port-matched Edelbrock Performer intake, Edelbrock 1,050-cfm carb, and Stan’s ceramic-coated headers, it churns out 800 hp and even more torque.
The trans is a Tremec T-56 Magnum six-speed mounted with a custom DHC crossmember. It has a Lakewood SFI bellhousing containing a Ram 10.5-inch Dual Force clutch actuated by a Ram hydraulic release bearing, and the rear axle is a Moser 9-inch with huge 40-spline axles and a Yukon Gear aluminum case containing a Truetrac limited-slip differential.
The interior is Spartan, with custom bucket seats in front (check out the Frankenstein and Bride of Frankenstein logos on the upholstery!), rear seat delete, a rollbar, and simple two-point lap belts.
Croyle is a film producer who has rented out cars to studios, so he understands the importance of items that allow easy action driving for the cameras, hence a transmission tunnel-mounted drift brake.
AutoMeter Phantom gauges provide engine details and a push-button is used to fire it.
The wheels are old Edelbrock “454” style 17x9s with Nitto NT01 Drag Radials, P245/45R17 front and P275/40R17 rear. The brakes are from Wilwood—13-inch/6-piston front, 12.66-inch/4-piston rear.
Rear suspension is from Heidts, using that company’s 4-link and Panhard bar setup with QA1 adjustable coilovers. You can also see the Moser 9-inch housing here.

The Knievel Connection
Warren Croyle runs Dark Horse Customs with his partner, Rick Wallen, but he previously lived the “Hollywood Life” as a film producer and manager of talent, the latest of which is Kaptain Robbie Knievel, the son of legendary stunt performer Evel Knievel. Robbie Knievel is set to star in an upcoming feature film—Blood Red Snow—set to be officially announced soon. The feature film arrives off the heels of Knievel’s upcoming book detailing his life story, Knievelution: Son of Evel, in stores early 2019.
In Blood Red Snow, Knievel plays Brody James, a former Iraq warrior turned vigilante justice dealer. Madd Maxx is the same car that Robbie will drive in the film. He said, “I’ve driven Ferraris, Lamborghinis, and all kinds of muscle cars, but nothing has harnessed more raw power and drivability than this new 545 Legend car.”