Banned, Ballasted, But Never Broken, The Bruder Brothers’ X275 1988 Mustang Maddens The Competition With Any Combo 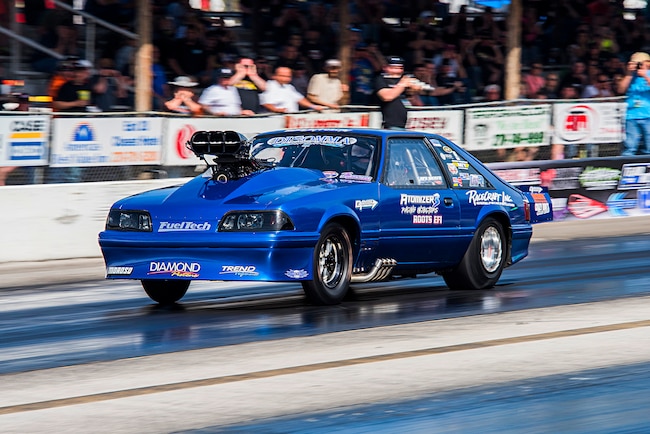 A towering Roots blower whirs as the Richard Bruder revs the 434-cube small-block against the two-step. Exhaust explosions percolate out the zoomies as the lights fall. As the transbrake button unleashes the fury, 30 pounds of boost sends the power into the stratosphere and the resulting 2,000 horsepower pounds the starting line like Thor’s hammer leveling a mountain. Somehow those narrowish 275 Mickeys dig into the track and catapult this Fox forward with the kind of g-forces you might see in a diving fighter jet. In just 4.20 or so seconds, the eighth-mile is covered and the Bruder Brothers racing team, rounded out by brother Nick, have notched another win, and likely another record.

“It is a fight because the Roots blower is so aggressive down low and it leaves on a lot of power off the button. To try and get it to hook up on a radial, if the track isn’t the greatest, is very hard,” Nick elaborated. “The in-between maintenance is demanding too, from checking the valves every pass to see if anything’s wrong to taking the pan down and checking the bearings. It’s a lot more work because it just beats the motor up.”

Over the years the brothers have run this Mustang with every form of boost imaginable, from centrifugal blowers to turbocharger to the massive Roots blower you see here. No matter what the combo was, the Edison, New Jersey, racers always seem to make it fly in the wild and wooly world of X275 drag radial eighth-mile drag racing.

He describes the brothers’ race car and their team as the most penalized in X275 history. However, this 1988 Mustang GT wasn’t always a small-tire iconoclast. In fact, it started out like many of the cars you see splitting time between the street and the dragstrip. “We used to have a Vortech on it, and then we switched over to a ProCharger, and it made like 700 horsepower back in the day on the street,” Nick recalled of the car some 16 years ago.

That might not sound like a lot of power when judged by today’s four-digit standards, but back in the day this car was street beast. It undoubtedly won a few races playing the sleeper role, but eventually the brothers decided they could run much quicker by combining their resources.

“We always had street cars that we turned into drag race cars. We got tired of spending the money separately, so we just decided to team up and do it together,” Nick said. “…The best thing we did was combine cars and resources together instead of wasting money separately.”

Racing is not an endeavor for the faint of budget, so the Bruder brothers not only combined their vehicle and economic resources, but they do the lion’s share of the work on the car, while Richard does the driving and Nick dials in the tune. “To be able to afford to do it, my brother and I do most of it. We do the stuff in-house. Anthony DiSomma lets us keep the car at his shop to work on it,” Nick confessed. “Back in the day, we used to work on the car in our trailer before we hooked up with Anthony. We used to do all the work in our trailer because in New Jersey we don’t have garages. We used to take motors out in the trailer, weld stuff in the trailer, and everything.”

Last season the duo decided to move from the traditional centrifugal-blower and turbo combos seen on many of the power-adder Mustangs in the X275 ranks. At the urging of an industry innovator, the brothers opted to go old-school with a massive, 8-71 Roots blower from Chuck Ford.

Strapped atop the aforementioned DiSomma Racing-prepped small-block it generated four-digit power and torque when coupled with that hammer-blow of boost. To withstand that cylinder pressure it features a billet crankshaft, Diamond forged pistons, GRP connecting rods and a Callies camshaft. Edelbrock SC1 cylinder heads prepped by BES Racing Engines feed that airflow to the cylinders, while 16, 500 lb/hr injectors feed the fire at the behest of a FuelTech EFI tuned by Nick.

“We were the first ones to do a full-blown EFI Roots deal. We worked very hard with Jack French of Billet Atomizer Racing Injectors. He was the one who really pushed us to do it, and well worked really hard to make it work,” Nick said. “No one had ever done it before so there were things we had to work through. It came together really quick though. Jack is pretty smart.”

This combo required quite a bit of custom fabrication to meld the big blower with a modern fuel-injection system and have every thing play nicely together.

“We had to place the injectors in the right place, so we had to make plates for that. It was set up for nozzles, so we had to make special injectors, special plates to bolt on to the blower, and a special manifold to accept the injectors,” Nick said. It obviously worked from a power perspective, but you can’t win as many radial races as the Bruder brothers unless the car around the engine can get the job done. Fortunately, their Fox has proven a trusty soldier in the radial wars.

“Crazy Don (Hesel of Crazy Don’s Chassisworks) built us a crazy car with all the Racecraft parts on it, and it just works with Menscer shocks all around,” Nick explained. “Once you have a good-working car, changing combos is easy because when the car is good, you are not chasing it and the combo. You are just chasing the combo.”

Speaking of changing combos, the insane Roots-blower setup you see here is already a thing of the past. The Bruder brothers proved their point by making at that blower work on a small tire. Now it’s time to go back to the future with a centrifugal-blower combo where they began this wild ride.

“It’s been the same car the whole way. It started off as a ProCharger car, then turned into a turbo car, then we put a roots on it, and we are back to a ProCharger now,” Nick explained. “The roots is just too had on parts. It beat stuff up, and they kept adding weight to us. It was a fast combo, but it was just too hard on parts.”

Moving to a ProCharger F-series blower should not only make for less track-side maintenance, but it will allow the brothers to focus on other aspects of the program, which should make their efforts even more formidable.

“With the ProCharger it is going to be way easier to keep in going. With the Roots blower you are counting everything — runs on the belt, runs on the bearings, runs on the rods, and runs on the head gaskets,” Nick said. “If you go a little too far, they come out. The other combos do hurt parts, but there are fewer things to manage.”

The duo are confident that they can quickly get a handle on this combo and be back to their top-performing form in no time. Not only do they have experience running this blower in the past, but in recent memory they have helped other race programs with ProCharger setups. Most notably they had a hand in a certain gold Fox Mustang’s championship run in the NMCA Muscle Car Nationals series.

“We did really well with Fletcher Cox’s car in the NMCA and NMRA. We won the championship and went to every final round but one when a transbrake wire fell off in the first round and we lost the transbrake,” Nick added. “The cars are very similar ProCharger deals. We have a lot of experience with ProCharger cars, so we should be good.”

At the time of this writing, the brothers were hard at work dialing in the new combination in preparation for Lights Out 10 in Valdosta, Georgia, so it will be fun to see how well it runs this season, but but this Fox will undoubtedly drive the competition crazy no matter what combo it runs.

One of the most accomplished and penalized race cars in X275 lore, this 1988 Mustang GT ran as quick as 4.29 at 171.51 in the eighth-mile with a 1.047 60-foot time with its Roots-blown combo. Will it run even quicker with a new blower combo?
Built by Disomma Racing in South Plainfield, New Jersey this 434ci small-block is filled with a billet crankshaft, Diamond pistons, GRP connecting rods, and a Callies camshaft. BES Racing Engines ported and prepped its Edelbrock SC-1 cylinder heads which features Manley valves and Jesel rocker arms. A Moroso oil pump and pan pair to keep it fully lubricated. On top a billet intake wears 16 Atomic fuel injectors controlled by a FuelTech EFI setup. The engine combo won’t change much with the move to a ProCharger.
“Probably last year, being the first in the .20s in that Unlimited Power class,” Nick beamed regarding his proudest moment with the car thus far. “It is really hard feat, and to do it with a Roost blower is tough. It is hard on parts and we made it live as long as it did is a big feat.”
Don Hesel of Crazy Don’s Chassisworks created a Fox Mustang that can plant 2,000 horsepower on a 275 radial. It gets the job done with Racecraft suspension bits; Menscer Motorsports dampers and springs; and a Racecraft floater rearend with Strange Engineer gears, axles and spool. Weld Racing wheels with Mac Fab beadlocks wear Mickey Thompson tires front and rear, while Strange Engineering brakes rein in this rocketship.
“It’s key to have a good-working car,” Nick told us. “We do a lot of stuff to the transmission and converter working with Marty Chance at Neil Chance Racing and Doug Klaput and Dave Skinner at Proformance Racing Transmissions.” That Proformance Turbo 400 automatic transmission features an ATI flexplate, a Neil Chance converter, and a Proformance shifter.
This Mustang might be a crazy racer, but it still retains those classic Fox bodylines. Several of the body panels, however, are now made of lighter carbon fiber, including the doors, front fascia, hatch, and hood.