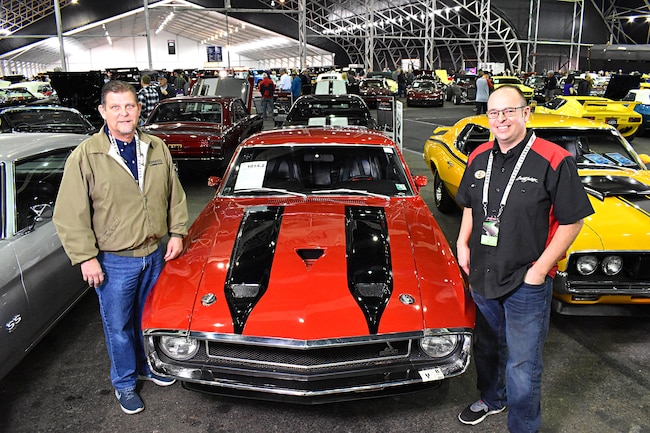 Ever wonder what it would be like to sell a muscle car at the largest collector car auction in the world, Barrett-Jackson (B-J) Scottsdale? Well, you’re about to find out.

Jason Billups, the man who just last year located the rare 1967 Shelby Mustang experimental coupe known as Little Red, brought a nice “survivor” 1970 Shelby G.T. 500 to B-J this past January. With over 1,800 collector cars being sold over a six-day period, this was the perfect place to find the right buyer. Bidding took place from Tuesday to Sunday, with Friday and Saturday showcasing the most desirable autos and memorabilia. Billups’ car went on the auction block Friday afternoon.

Michael Smith, on the left, and Jason Billups in the Barrett-Jackson Scottsdale exhibition hall. They purchased this 1970 G.T. 500 from a nice collection of Shelby Mustangs the 89-year-old owner was liquidating.

The Find
Billups caught wind of an 89 year-old Shelby collector in nearby Oklahoma City who was selling off his collection, and quickly partnered with Michael Smith, a long-time friend/customer, to go Shelby shopping. Billups was hoping to find at least one from his favorite years, 1969 and 1970, and as luck would have it there were two—a pair of 1970 G.T. 500s. A deal was struck for the ’70 Calypso Coral G.T. 500 equipped with a Super Cobra Jet engine and the ’70 Red G.T. 500, and after delivering both to Billups Classic Cars the partners decided to sell the Calypso Coral immediately and take the Red model to B-J Scottsdale.

Our 1970 G.T. 500 came with a matching numbers 428 Cobra Jet engine, automatic transmission, power steering, power disc brakes, and air conditioning. It is all original with the exception of a mid-1970s repaint.

Survivor Shelby
The Red 1970 G.T. 500 fastback was advertised in the 2019 B-J auction catalog as being powered by its matching numbers 428ci Cobra Jet engine, mated to its matching numbers C6 3-speed auto transmission. This “survivor” is also equipped with power steering, power disc brakes, 3.0:1 Trak-Loc rear axle, air conditioning, and performance suspension. The car was sold new by Dub Richardson Ford in Oklahoma City in November 1969, and has logged only 83,000 miles—it has not touched the road since 1980. While never having been restored, our featured find did receive a re-paint due to minor damage to the passenger quarter panel in the mid 1970s. The interior, undercarriage, trunk, and engine compartment are untouched and original. Two build sheets and the original Shelby owner card were included in the sale.

Jason Billups, co-owner of Billups Classic Cars restoration shop along with his brother Scott, prepped this Mustang for sale by insuring all the mechanicals were in working order as well as buffing out the red paint and cleaning the interior and engine bay. He and the car arrived in Scottsdale before the auction, parking it inside one of the exhibition halls, a choice location that saw heavy foot traffic during the week.

Two days prior to its date with the auction block, noted TV personality and auto expert Steve Magnante filmed a segment on our Shelby and its neighbor, a yellow Cougar Eliminator, that aired a few minutes prior to the actual sale. We were able to chat with Magnante between filming takes, as he and Jason traded car stories.

Rear window louvers were an add on, after leaving the dealership. The two black stripes on the hood, along with the front chin spoiler under the bumper indicate this is a 1970 Shelby and not a 1969. Our Shelby is too original for a complete restoration, but the 1970s repaint keeps it from being called all original. The 40-plus year-old paint hasn’t lost much of its luster, and the Cobra emblem hasn’t lost much of its sparkle.

Speaking of TV personalities, we attended several interviews conducted at B-J in a small auditorium during the week, including Chris Jacobs (host of Overhaulin’), Dave Kindig (host of Bitchin’ Rides), and Wayne Carini (host of Chasing Classic Cars). The most interesting discussion, though, involved Craig Jackson, CEO and Chairman of Barrett-Jackson Auctions, and our Jason Billups, updating us on the restoration of the two Shelby coupe prototypes, the 1968 Green Hornet and 1967 Little Red. Where else could you go for this type of experience?

Six years ago, Smith and Billups brought a 1968 Shelby G.T. 500KR to B-J Scottsdale and sold the car for $120,000. They did well that day, and were hoping for a repeat with their latest entry. Smith spent most of the week close to their auction entry, in order to answer questions from prospective bidders. It was fun watching him become more and more hyped up about the car going up for sale, even describing the thrill of driving a car up the ramp and onto the auction stage as he’d experienced six years prior.

The number of people inside the building housing the Shelby was amazing. It was crowded from daylight until late into the night. Besides viewing all the fabulous cars there were hundreds of exhibitors selling different wares, food, and beverages. Smith’s bidders badge allowed him ten free alcoholic drinks per day from the VIP lounge next to the auction area. And surprisingly, there were a number of women at this event, and they all seemed to be enjoying themselves, including your author’s wife.

At noon Friday, Billups and Smith drove their Shelby Mustang out of the building to the first of three staging lanes, prior to entering the large auction venue. At 2:00 pm, they drove the car onto the stage and the bidding commenced. Before we knew it, the price had escalated to $60,000. After a brief lull, it took off again as the car was driven away from center stage and parked on the off-ramp, partially hidden from the bidding audience. I’m assuming this action attempts to make the bidders feel that the car is “getting away from them,” and that they need to stay engaged in their antes. The last bidder’s raised hand brought down the gavel at $78,000. Sold! After deducting the eight percent sellers fee, they cleared close to $72,000. According to Smith, “We broke even, but the experience made it all worthwhile”.

Before leaving the building, I mentioned to our guys that I thought I’d heard the auctioneer say that the buyer’s name was Roger Staubach. After returning home and watching the recorded segment on TV, that’s exactly what was said. Now I have to find out if it’s the retired Dallas Cowboys quarterback, or someone else.

Our G.T. 500 being prepped just prior to entering the auction venue at the 2019 Barrett-Jackson auction. There were quite a few nervous owners here, about to become former owners.
Our Shelby being displayed at center stage to a sea of bidders, on hand, on the phone, and in contact via the internet. The auctioneer is on the platform above the Shelby.
Even though the car has been removed from the center stage and is partially hidden in the off-ramp, the bidding continues. It will remain in this position until the auction process has concluded.
The hammer has fallen at $78,000. Steve Magnante is standing to the left rear of the Shelby. The new owner, Roger Staubach, has to be thrilled with his purchase. We’re wondering if he will drive it or keep it tucked away in his garage.
Under the G.T. 500 hood is the original 428 Cobra Jet engine, complete with smog equipment and a/c compressor.