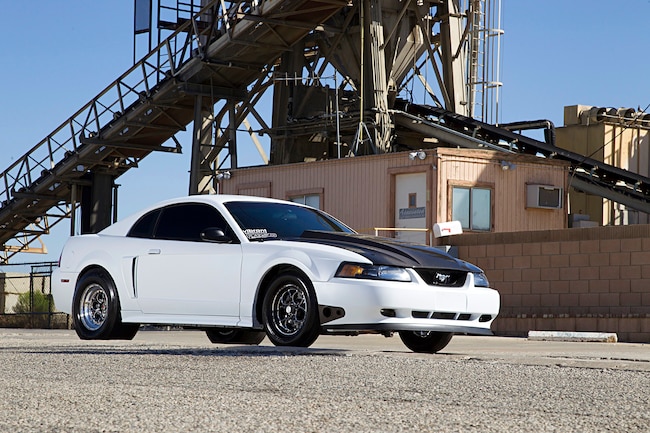 “You better check yo self before you wreck yo self,” the lyrics flowed over the Pandora stream. “Cos I'm bad for your health, I come real stealth.” While the street poet that crafted these rhymes has gone stealth as a Hollywood star, his gangsta rap origins are where it all began. The reverse can be said for this 2003 Mustang GT campaigned by Brian Parks and Chad Simpson.

What began as a modestly powered Two-Valve street car morphed into a twin-turbo, 347 stroker-powered grudge machine with an appetite for boost and those blocks of frozen H2O.

“We had thrown around a few names with our group during the build process. One of the first suggestions was Snowball because the project kept snowballing to the next level. One day while working on the car and listening to Ice Cube Radio on Pandora. Chad looks up and says the car’s name is “Ice Cube!” It made sense at the time, and actually makes more sense now that the car runs. With the air-to-water intercooler and the large Ice tank in the trunk, it fits three 20-pound bags of ice.”

With that kind of crystal habit, this New Edge ’Stang’s moniker is definitely befitting of O'Shea Jackson Sr.’s street name. And, much like Cube, this New Edge kicked it on the streets for a while. It was a bolt-on street car that moved through a couple of friends of the Brian and Chad. Eventually little modular under the hood received its death certificate.

Brian and Chad vowed not to stray too far from the street-going look of this 2003 Mustang GT. As such it doesn’t wear a big wing or any add-on body panels, just a bare True Fiber hood and a Flat Pearl White paint job. Rolling on Weld Magnums, it’s not quite a sleeper, but it is clean.

The duo had always been fans of Fox Mustangs, which we can fully support, but it was a good day when they embraced the idea of turning a New Edge pony into a purpose-built, small-tire predator. Brian happened to have the basis for a pushrod powerplant that was down for whatever, so this project received a retro engine swap.

“I had a good block and bottom-end that was originally planned to put in my 1987 GT I have had since high school. It was planning on building it as a nitrous street car,” Brian said. “With our group of friends we wanted to be competitive with on the track and street, so I would have had to start hacking the car up as more of a race car.”

“When the opportunity came up to buy Ice Cube as a roller, it just made sense. I wasn’t thrilled with hacking up my high school car and Ice Cube needed a motor,” he added. “Original thoughts for the build had a carb, stick shift, and nitrous. That changed a few times...”

That plan most definitely evolved over the multiple years of the build. The duo poured every spare moment and dollar — “Get Money, Spend Money, No Money” — into turning the former daily driver into a track assassin. “From the time we acquired the car from our friend Joe Pelayo, we started scraping the sound insulation from the floors, and removing the stereo and all wiring. We did all the little inexpensive things, while we decided the power adder and trans combo,” Brian confessed. “One idea led to another, and next thing we know I’m asking my wife for turbos for my birthday and ordering a Holley EFI system. Fast forward five years later and we started it up.”

Propelling this gangsta racer is a 347-cube small-block based on a World Products Man-O-War block machined by Pettis Performance in Hesperia, California. In this shot it was filled with a Probe Industries rotating assembly and topped with out-of-the-box Trick Flow High-Ports, an Edelbrock Super Victor intake, and an Accufab 90mm throttle-body. A custom Bullet camshaft works with Jesel shaft rockers and PAC springs to open the valves and let in the Precision-supplied boost and Aeromotive-pumped fuel.

He describes those Precision 6266 turbos as the best birthday presents ever. They deliver 30 pounds of boost through a CX Racing air-to-water intercooler to the aforementioned 347-cube small-block. It is based on a Man-O-War block filled with a Probe rotating assembly and topped by Trick Flow heads. A custom Bullet camshaft, teamed up with Jesel shaft rocker arms, makes the most of all that boost.

Ice Cube’s turbo stroker pumps out four digits to the rear wheels. Planting that much power on the dragstrip requires a well-thought-out suspension setup. Chad and Brian revamped the former street car with a number of upgrades from Team Z, including a tubular K-member, A-arms, rear control arms and springs. Strange Engineering dampers keep it under control, which is something this duo has done throughout the process of the project.

“Our personal friendship was huge during the build. We kept each other inline and motivated. If one of us started to have a crazy idea to go a different direction, or thinking of quitting, we were able to talk it out. Neither of us would have been able to build the car on our own or have been able to do it with anyone else,” Brian said. “Our friendship goes back to high school, we trust each other’s judgment and decisions. As surprising as it was, we never had much of an argument during the build. I don’t think that would be possible with anyone else. Our goals and end results were always in line — to keep the build clean, simple, and stock looking as possible. Selling the car once it was done was never and still not on the table.”

Ultimately the plan came together. When the key turned, Ice Cube’s Aeromotive belt-drive pump fed the 160 lb/hr fuel injectors and its MSD Digital 7 lit the fire with NGK spark plugs. It was the culmination of the first stage of the friends’ mission. “…The day we were able to fire the car up in garage for the first time was definitely special,” Brian said. “After all the time and money we spent, it definitely motivated us to wrap up the last couple of things and get it ready for the dyno.”

Brian Parks and Chad Simpson transformed this New Edge roller into a no-time drag racer named after a hip-hop legend. “We also owe a lot to our close group of friends. We wouldn’t have been able to do what we have without them. They sure had no problem helping spend our money!” Brian said. “We owe big thanks Kelly Henry who did 90 percent of the fab work, Joe Pelayo for his research and hot side of the turbo system, Tony “Grandpa Hollywood” Politano for helping with the engine build, Chad’s brother, Cody, for his track assistance and a huge thanks Eddie Rios at Addiction Motorsports for the tune-ups that get us down the track!”

As we noted before, that trip to the dyno yielded impressive four-digit results. With its first set of cylinder heads the combo put down over 1,100 horsepower and its current heads yielded over 1,200. Due to the nature of its dragstrip mission in no-time events, we won’t know just how quickly it ran, but its owners seemed satisfied with its initial results.

“Ice Cube exceeded all of our expectations so far — from the dyno numbers to the first time we took it the track,” Brian said. “The first no-time event we took it to in Sacramento for a Team Boddie event, we won the Limited Small Tire class. The only problem now is that we want to go faster.”

That means bolstering the engine internals for more boost. The plan is to rebuild the 347, then replace the extant Precision 6266 turbos with a set of larger 6870s. “We have taken the motor out and are currently in the process of re-doing the rotating assembly,” Brian added. “The car now has over 200 passes on it and we have decided not to push the limits any further on the rotating assembly. Last time on the dyno it made 1,280 horsepower with new, out-of-the-box Trick Flow High-Ports. We figured the steel H-beam rods are at their quitting point.”

So stay tuned to see what the boys put under the hood, which will include a Callies crank, aluminum rods and a custom pistons — but don’t expect to see an e.t. on display any time soon. Just know Ice Cube will be even quicker when it hits the track again to put the whoop on ’em.

Brian and Chad stripped Ice Cube of any unnecessary gear. Framed by its Team Z roll cage are a pair of Kirkey seats in front of an MMR rear seat delete. The dash is stock, but it houses a Holley digital dash. Poking up through the center console like a monster from Loch Ness is a Precision shifter that actuates a Mike’s Transmissions Powerglide fitted with a Cameron torque converter and an Inland Empire Driveline aluminum driveshaft.
Running on the down low out back, this Mustang doesn’t wear a big wing, just a factory trunk lid. Underneath, however, a ubiquitous 8.8-inch rearend is on the receiving end of four digits, which it distributes via a 4.10 gears set, Moser 33-spline axles, and Weld Racing Magnum wheels wrapped in Mickey Thompson 28x10.5-inch rubber. 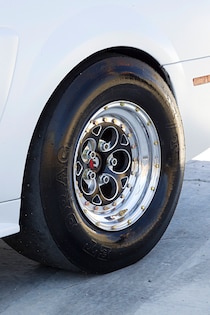 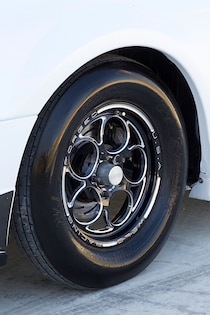 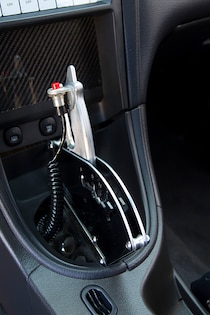 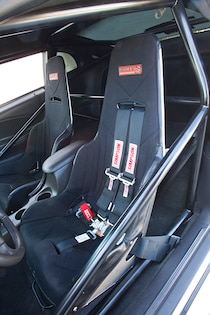 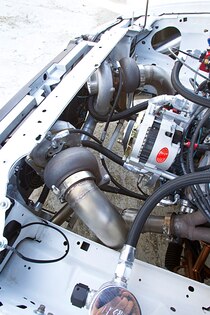 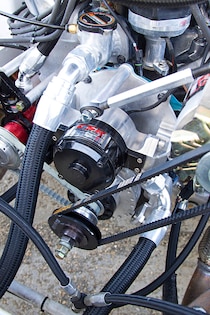 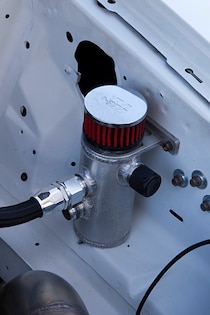 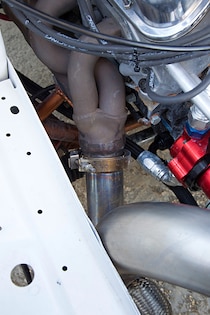