If Scott Hicks Had Taken A Different Path, This 1985 Mercury Capri Would Be In A Boneyard 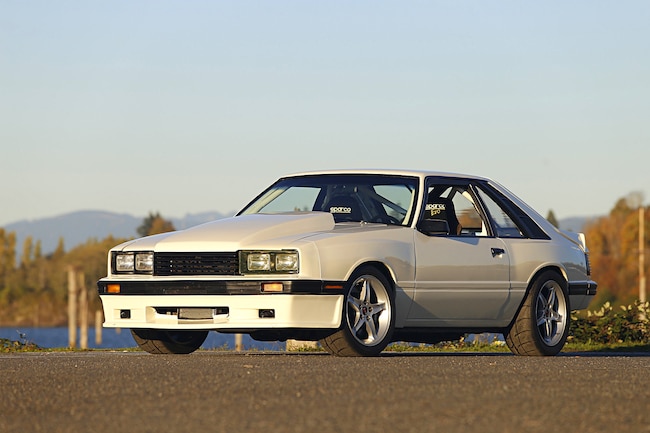 What is it that distinguishes someone with a modest interest in cars, from someone you would call a hardcore enthusiast? For Scott Hicks, it’s not the fact that he wrenched for a Mustang high performance shop for 18 years, though that surely indicates vast competency and experience. Rather it’s Hicks’ own car that reveals his all-in tendencies. Witness the Fox-body 1980 Mercury Capri that he built after long days of installing superchargers, suspensions, and big brakes on untold numbers of customer rides. This is the car that reveals Hicks’ penchant for road racing, customization, and all things late-model Ford. In short, it reveals hardcore enthusiasm, and yet it almost didn’t happen.

In 1990, a 19-year old Hicks was looking for his first car. “I wanted a sporty car on a budget. It could have been a Celica, Lancia, low-end Porsche, or something else, but I stumbled onto this Capri in the AutoTrader. Originally it was a turbo-4 RS model, but somewhere along the way it lost the turbo setup. It looked cool to me, and what can I say, the price was right.” To no surprise, the now normally aspirated 2.3L was uninspiring, but performance upgrades would have to wait awhile as the car’s first duty was that of daily commuter and weekend enabler of fun. “I drove the car everywhere, college and work, and on the weekends we would use it to travel to concerts, camping, and everywhere else you can imagine. I took to calling it the “Hotel Capri” due to the foldown rear seats, which enabled a cheap, dry, and secure place to sleep.”

As the months passed, Hicks realized that a V8 conversion was the obvious path to respectable performance and contacted Brad’s Custom Auto in Seattle to do the work. “I knew next to nothing about mechanics at the time, but proprietor Brad Seibold had a sweet 1986 Mustang that modeled a lot of what I wanted to do to my car.” A drivetrain swap from a wrecked 5.0 Mustang started the ball rolling for Hicks, serving as the first of many upgrades on the Capri, and the impetus for him to enroll in an auto technician curriculum at a local vocational school. By the end of the 18-month program he was already working on Mustangs and Corvettes at Seibold’s shop, where he had spend close to two decades.

We’ll dispense with the various iterations that Hicks’ Capri saw during years prior to the full build, but suffice to say it was a pretty typical bolt-on evolution. The car serves as an excellent reminder that there’s plenty to like about Mercury’s pony car sibling, which casual observers easily mistake as a Mustang from the same era. Hicks feels the best virtues of the Fox Capri are found in the front and rear fenders, where subtle factory flares have an IMSA racer vibe.

When Hicks decided on the full teardown and build, he was grateful to Seibold for allowing him to do the work at the shop after hours. Without minimizing that sentiment, the in-process Mercury no doubt also served to inspire potential customers as to how far they could go with their own projects. Once the car was stripped to its shell, Hicks seam welded the entire chassis and installed Griggs World Challenge in-car subframe connectors, then turned to Cascade AutoSport for the elaborate rally style 8-point roll cage. With the car substantially stiffened, more Griggs components were installed during the suspension install. These include a GR40 tubular K-member, severe duty front control arms, Koni double-adjustable struts, and 475 lb/in coilovers. Out back finds a Griggs torque arm and Watts link, tubular lower control arms, and Koni coilovers.

With a road race intent, a normally aspirated engine was the only approach considered in deference to simplicity, light weight, and consistent power output. Hicks had Dave Bliss screw together a rowdy 331 based on a Ford Performance Sportsman block with ProGram billet 4-bolt main bearing caps. The reciprocating assembly consists of an internally balanced Eagle forged stroker crank, Eagle H-beam rods, and JE pistons that yield an 11:1 compression ratio. A Comp solid-roller lifts the 2.05/1.60 valves in ported Canfield heads to the tune of .609/.611-inch lift and 242/248 degrees duration at .050. Topped with an Edelbrock Victor Jr. intake and Barry Grant Silver Claw carb, the combination was good for 393 rear-wheel-horsepower at 6,050 rpm. A more recent change to Powerjection fuel injection lost a bit of power but delivered significantly better drivability, and Hicks figures an in depth tune will recover the lost horses.

Downstream of the 331 sits a fully built G-Force T5 by Bill Ericson, assisted by a Spec Stage 2 clutch and Fidanza aluminum flywheel. Further arrears is the expected 8.8 rear featuring 3.73 gears and a Torsen T2-R dif. Putting the brakes to all the forward motion falls to more components from Griggs Racing, specifically their Griggs/Sierra four-wheel disc setup. Four piston calipers reside at each corner, with 13.5-inch two-piece rotors up front, and 12.5-inch units out back.

After two years of building, Hicks’ Capri re-emerged as one of the more capable Fox bodied track cars we’ve recently encountered. The inherent Fox Achilles heels have been addressed, with a light and stiff chassis, reliable and repeatable power, strong brakes, and an appearance that stands out in a crowd. Long gone are the “Hotel Capri” days, replaced by a variety of open track events in the Pacific Northwest, as well as autocross, SCCA time trials, and more. It’s what Hicks had at one time only dreamed of for the car, and yet there are still a few bucket list events to check off. One would be open road racing along the lines of the Silver State Classic Challenge, and when that time comes, we’re certain the Capri will turn in a solid performance. Hicks had best make some hotel reservations in advance, because that comfy fold down rear seat is long gone!

Hicks’ Capri is nicely finished in its original Polar White hue, courtesy of Chris White. The Sikkens paint products cover a blend of stock and aftermarket panels, the latter being an H.O. Fibertrends cowl hood and fiberglass hatch with lexan window. Lexan quarter windows are employed a well, helping achieve a total weight of 2,950 pounds sans driver.
Prior to a complete teardown and build as a street legal track car, Hicks ran Ford Performance’s M2300K four-wheel disc brake kit. In the new configuration, the Cobra brakes were replaced by these Griggs/Sierra binders. The front uses a four-piston caliper with 13.5-inch two piece rotors, the rears are a four-piston 12.5-inch combo.
The interior is all business, stripped of all unnecessary niceties. Highlights include a rally style roll cage, Sparco seats, Momo quick release steering wheel, and full array of Auto Meter gauges.
Natural aspiration is the order of the day under the hood with a stout 331ci small-block. Horsepower is just shy of 400 to the rear wheels and provides consistently quick lap times. The stealth black approach is in sharp contrast to the white engine compartment.