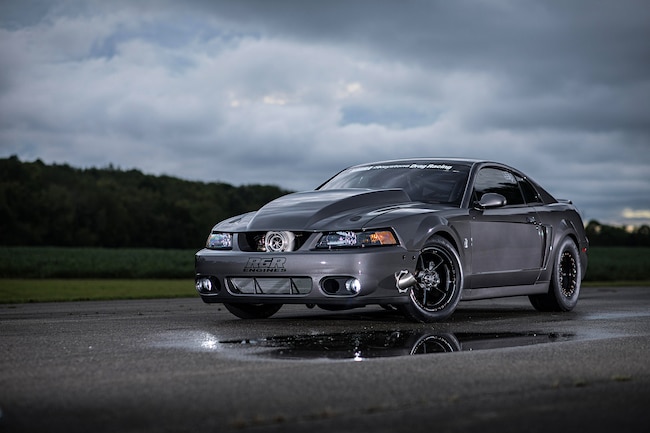 Close your eyes and think back 15 years to 2003 when Ford released the SVT Cobra, which was dubbed the Terminator. It was unlike any other Mustang produced before it, cranking out 390hp thanks to a supercharged 4.6L and Ford only offered it with a Tremec six-speed manual transmission. The Terminator enjoyed a two-year production run, but its impact on future models that is still being felt. We will be bold and say it was the first major step in launching the modern street car niche that we are enjoying today.

Everyone has their favorite Terminator color and one of the more rare hues is Dark Shadow Gray, offered only in 2003. There have been just 851 hardtops produced in that pigment and for Illinois resident Keith Ciborowski it has been the holy grail of Mustangs since he was a young kid. “I used to go racing with my dad all the time in the early 2000s at NMRA and World Ford Challenge so I’ve been around drag racing my whole life. And when Ford released the Terminator, my dad and I just loved the Dark Shadow Gray. I knew right then that I had to have one,” shares Ciborowski. Just a decade later, in 2013, he would get his wish and Ciborowski grabbed a low mileage Cobra in his favorite color.

Like all Terminators this one had the typical bolt-on parts like a cold air kit and tune but its mild nature didn’t last long. Ciborowski removed the factory Eaton M112 supercharger and added a VMP blower, which uses an Eaton TVS 2300 rotor pack. The other mods came quickly to support it like a Fore fuel system, headers and exhaust, custom tune, and a set of heavy-duty IRS axles. The sporty 390hp from the factory was nearly doubled when the Terminator began laying down 700rwhp.

The lure of drag racing pulled Ciborowski in, which made him a regular at Gateway Motorsports Park that is just 20 minutes from his home. The winter of 2014/2015 saw a live-axle slung under the backside since dragstrip action was a common occurrence. Wagon Wheel Peformance helped with the live-axle conversion by plumbing the new brake lines and building the 8.8 rearend. Other off-season upgrades had him ditch the manual transmission and STL Mustangs replaced it with a 4R70W automatic transmission. The results were instantly noticed and he was running 9.20s during the 2015 NMRA World Finals thanks to a little help from a small shot of nitrous.

A best time of 7.56 at 187 mph was accomplished with 33 psi of boost from a Precision Pro Mod 85mm turbocharger. The bigger unit has been removed for 2019 and in its place will be an NMRA Renegade class-legal 76mm turbo.
Most people would be satisfied with a low 9-second street but not Ciborowski, as he confessed, “I always wanted an 8-second car.” So the drivetrain was pulled and sold-off with the anticipation of picking up a complete setup to replace it. However the deal fell apart for his new setup, forcing Ciborowski to search for solutions. He decided to call Eric Holliday, shop manager and racing specialist at JPC Racing to talk about some options.

By the end of the call a Coyote 5.0 engine was procured from a junkyard and boxed up. Also on the pallet of parts was a Powerglide transmission and JPC Racing P/G conversion kit. The transmission was built by Transmission Specialties but has some tricks from Proformance Racing Transmissions, like a dump valve to help spool the massive single turbo. A Pro Torque Gen X torque converter was also part of the JPC drivetrain package.

The Coyote went directly to Rich Groh Racing (RGR) to get the “JPC” treatment in preparation for its new turbocharged life. The factory Coyote block received Darton sleeves and a set of RGR/JPC water jacket supports, which is a standard setup in any serious JPC Racing combination. A Boss steel crankshaft was selected and a set of Oliver connecting rods and custom Diamond pistons swing off it. The compression percolates at 11.5:1, too high for pump gas and boost, but it is just right since the engine runs on nearly pure ethanol—E98 instead of E85. The cylinder heads were ported and oversized Ferrea valves were installed, along with custom springs and RGR/JPC camshafts. A Cobra Jet intake manifold and throttle-body finish off the induction system and a set of Injector Dynamics ID2000 (200 lb/hr) fuel injectors were installed in the manifold.

Ciborowski originally planned on running a tiny T4-based turbocharger, however Holliday talked him into a larger boost-maker. They settled on a Precision Pro Mod 85mm turbocharger, the same kind that is used in X275 action. The RGR/JPC engine sees 33 psi of boost from the X275-spec turbo and the hot and cold side of the kit is custom-built by Hallowell Custom Fabrication. Keeping the boost cool is the job of a Chiseled Performance air-to-liquid intercooler, which is rated to 2,000hp.

The Terminator’s engine bay has created a cult following on social media as Ciborowski ditched the 4.6L Four-valve Mod motor in favor of a newer Coyote engine platform. Rich Groh Racing handled the engine build and it makes around 1,400 rwhp. The cold side of the turbo kit is unique as Hallowell Custom Fabrication split the feed into two pipes for the dual-bore Ford Performance Cobra Jet throttle-body.
The 10-point cage that was installed a few years earlier only carried an NHRA-rated 8.50 certification, meaning Ciborowski needed to get it upgraded. He dropped the car off at Hallowell Custom Fabrication for a new cage that meets SFI 25.3 specs, allowing Ciborowski to be safe no matter what e.t. the Terminator would go with its new running gear. Other suspension upgrades include a UPR setup in the front and back while Viking coilover struts are bolted in the front and Menscer Motorsports shocks are in the back. The Holley Dominator EFI tuning is a collaboration of sorts. Ciborowski brought the car to JPC Racing for its initial tune up, which was done by their in-house calibration expert Kevin MacDonald. On track, Ciborowski handles the fine-tuning while consulting with Holliday and JPC Racing’s Aaron LeBlanc. Racing a turbocharged car was a new concept and Holliday wanted him to run it easy so it was set up with low boost and timing.

A year in the making with late nights in the garage with his dad Mike, Ciborowski got the car on track in the early part of 2018. “We went 8.70 at 160 mph the first time,” he says. Little-by-little the group added more power and tweaked the chassis. By the end of the year Ciborowski ran his best time-to-date, 7.56 at over 187 mph. He also managed to earn a runner-up finish at the NMRA World Finals in the Turbo Coyote Shootout and a semifinal finish during the ModNationals in the King of 4V category. HPJ Performance helped with routine maintenance and valvespring upgrade between major events. The Terminator still sees limited street-duty with the last outing of the year being a local cruise and Ciborowski went 60 miles without any problems.

Just as Ciborowski’s dad got him hooked on drag racing, his influence and direction is once again steering the young Illinois racer. After the elder Ciborowski won an NMRA championship in Limited Street, the younger Ciborowski is getting focused on a national category—Renegade.

For 2019 the big 85mm turbocharger is being put on the shelf in favor of a class-legal 76mm turbo that he procured from NMRA sensation Tony Hobson, and Ciborowski plans on running a limited NMRA schedule. For the off-weekends he still has the larger boost maker with hopes of going much further into the 7s and approach the double-century mark. 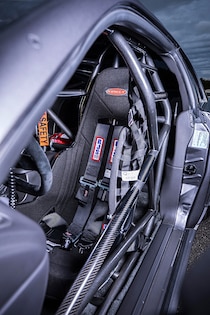 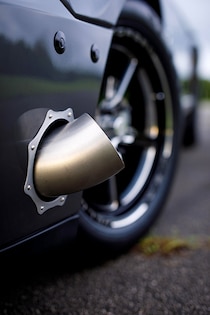 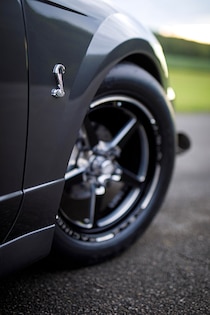 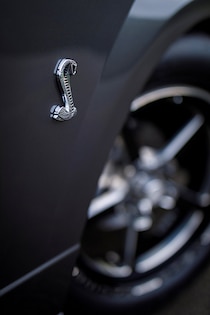 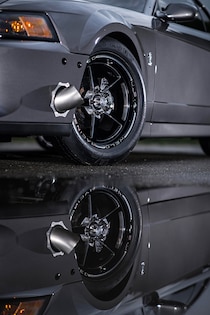