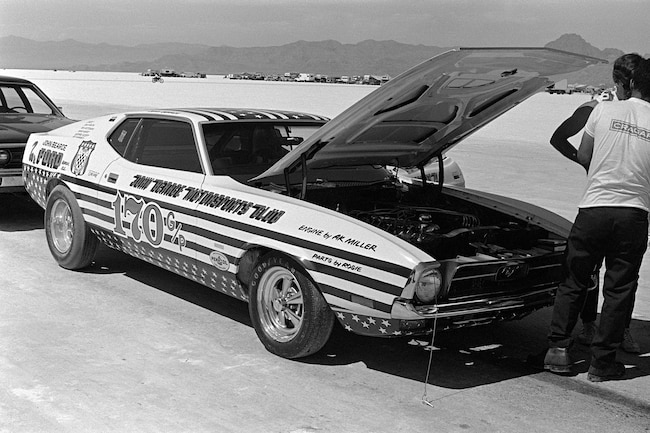 During 1971, Hot Rod photographer Eric Rickman was the primary shooter for Motorcycle Sport Quarterly magazine, produced by Petersen’s Specialty Publications division. He never missed an opportunity to shoot other things that interested him, so he grabbed this shot of John Bearce’s unusual G/P Class 1971 Mustang. Bearce, a Ford dealer in Illinois, had a passion for Bonneville, and he also dabbled in Formula cars and off-roading. For the dry lakes, he was known for taking the less-traveled path as far as Ford vehicle choice was concerned, from Maverick to Escort. Over his decade on the salt, Bearce set a handful of records. According to the results listed in Hot Rod magazine, this time out wasn’t a record run. No additional editorial information was available for this car, so our only clues are from the photo itself.

Under the hood is a mechanically injected straight-six, perhaps a 250-incher. Fender art touts Ford performance expert Ak Miller as provider of the engine and tuning expertise. (Ak’s own entry was a slick propane-powered Pinto that, unfortunately, also missed the record-making mark.) Before Bearce’s Ford dealership was sold, his employees restored his Maverick land speed car as a present to him. It was offered, many years ago, on an eBay auction, but it failed to meet the reserve price. There’s no telling what became of this Mustang.