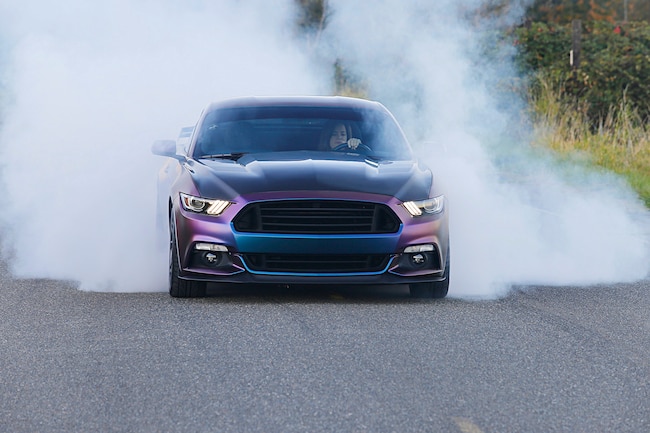 It’s hard to know when any of us are influencing a child or adolescent, but rest assured that it happens with regular frequency. Young people are always watching and learning, which is just one of the reasons to always put your best foot forward. We doubt that Stephanie Strack’s older cousin even realized the influence she was having on 10 year old Stephanie when she began driving a bright yellow SN95 era Mustang around Y2K, but influencing she certainly was. Stephanie explains that it was this car that hooked her on Mustang mania; she even knew it at the time. Some day… she thought.

By driving age, Stephanie’s desire for a Mustang of her own was burning strong, but a car certainly wasn’t going to be handed to her. “When I was 17, I got a job at a local fast food restaurant, and took the bus there every day after school for work.” She even recounts working the drive-through window and noticing a guy in a modified SN95. “Right there I told him I wanted a car like his some day, and remarkably, we’ve become good friends in the years since. Jereme Sawyer is an Afghanistan war veteran, and is still an inspiration to me.” After saving her pennies, Stephanie’s first Mustang would come a short time later when she bought an 2001 V6 with a 5-speed in 2007. While it wasn’t her ultimate dream car, it was certainly a good start. Stephanie was becoming immersed by now, rowing her own gears, installing a Flowmaster exhaust, and getting to know other members of the Mustang community at a weekly Friday night car show near her home in Puyallup, Washington.

Stephanie took another step up in 2010 when she bought an 2002 GT, but her life went on hold a couple years later when she joined the Army; eventually working as a military police officer. Once in the groove as an MP, Stephanie again returned to her Mustang interests and traded the GT in on her first real dream ride, a 2007 Roush Stage II. It was a genuine creampuff with just 3,200 miles, and Stephanie wasted little time making it her own. She turned to Brad’s Custom Auto in Seattle for a litany of modifications, to include cams and long tube headers, and for awhile it was Mustang bliss. “I loved that car,” says Stephanie, “but to be honest, I ended up having a lot of unfortunate experiences in it.” The troubles were two-fold, with annoying gremlins that may have come from mostly sitting for 7 years, such as the leaky heater core and intermittent dash light failures. The real kicker for the car that Stephanie later nicknamed “chaos,” was a series of accidents caused by distracted drivers. After several repairs, the Roush was no longer the creampuff that Stephanie desired, which brings us to the car spread across the pages here.

Fresh out of the Army in late 2016, and with a good job in hand, Stephanie decided it was time for a fresh start. She traded her Roush in on a brand new 2017 GT, and now had a clean slate to work with. Stephanie has always worked hard for what she has, and knows the value of a buck. The new car was an admitted stretch for the then 27 year old, and so she carefully prioritized what she was willing to pay for. “I decided against the upscale trim packages, because frankly I think the base interior is pretty nice. Instead I spent my money on things that really mattered.” Read between the lines, and that means Stephanie eschewed the frills in favor of high performance. Of course the main players are the GT’s Coyote V8, a six-speed manual trans, and the Performance Pack which comes with 6-piston Brembo front brakes, 3.73 gears, and a host of other suspension and cooling upgrades. Stephanie’s color choice was Magnetic Metal, thought the current deviation is clearly visible – more on that in a moment.

Fresh from delivery, Stephanie wasted little time putting her own stamp on her new car. First up was a set of Steeda lowering springs, and not far behind was a Steeda rear wing and MMD grills. Stephanie explains that she chose the wing in part, in homage to her first Mustang, a New Edge with a factory rear spoiler. “The Steeda piece reminds me of the original wing on my 2001, although the Steeda one looks much better, and on a S550, I think really sets it apart.” Clearly, Stephanie was charting a course that would make her Mustang uniquely hers, though the real showstopper was still to come.

When Stephanie purchased her new GT, she truly loved the dark metallic factory hue, and still does, but she soon realized she wanted something that would really separate her Mustang from the crowd. To that end, she decided on a full vinyl wrap supplied by Fellers, the actual vinyl being an Avery Colorflow satin product in a color known as Rushing Riptide Cyan Purple. The chameleon like nature of the wrap ranges from deep blue to purple, and while it’s not going to be what everyone wants on their own ride, it’s unquestionably stunning. It’s frankly what drew us to the car when Stephanie had it on display at the Mustangs Northwest Bellevue Roundup, but we were drawn further in by Stephanie’s story and her passion for Mustangs.

Just as Stephanie did with her 2007 Roush, she enjoys occasional track forays in her 2017 on the road course at Portland International Raceway. The site of numerous professional race series events over the years, Portland is a great place to exercise the performance offered in today’s high powered ponies. And yet the factory 435 horsepower and 400 lb-ft of torque offered by the Coyote 5.0 wasn’t enough for Stephanie. She recently upped the ante with Ford Performance’s M-6066-M8627 supercharger kit for the S550, featuring a 2.3-liter TVS blower that makes up to 9-pounds of boost. This gave Stephanie’s S550 a healthy bump in power to 670 horsepower and 545 lb-ft of torque.

With engine output that is undoubtedly dragstrip worthy, we asked Stephanie if she’d ever run the quarter-mile. “I’m planning to this coming year,” she said with a grin, adding that she has a one-piece driveshaft and a couple other upgrades to do before she gives it a shot. Rather than just an optimistic comment, we’re confident Stephanie will make that 2019 date at the drags because she’s got a can-do attitude, and a track record of accomplishing what she sets out to do. And if we had to guess, we’ll bet her trip to the dragtrip will be the first of many!

You can’t blame Stephanie for not wrapping her carbon fiber hood from Anderson Composites. The functional and lightweight bonnet was installed when the car was still showing its Magnetic Metal paint, but it’s a whole lot more evident with the contrasting vinyl wrap.
The healthy factory 5.0 is all the more so what with a Ford and Roush developed TVS supercharger kit. Not only is the setup 50 state legal, Stephanie says she preserved her warranty by having the 675 horsepower kit installed by her local Ford dealer.
Gloss black 20-inch wheels complement the other visual upgrades on Stephanie’s GT. These particular shoes from Wheel Replicas measure 8.5-inches wide in front, 10-inches out back, and are shod in 255/35ZR20 and 275/35ZR20 Ohtsu rubber.
The base interior of Stephanie’s GT is luxurious by standards of the past, yet almost pedestrian today. Rather than spend on leather or other luxury items, Stephanie’s hard earned dollars went to the Performance Package. A good choice!
Steeda’s Functional Race Wing vaguely reminded Stephanie of the factory wing on her first Mustang, so it got the nod as one of her first upgrades. 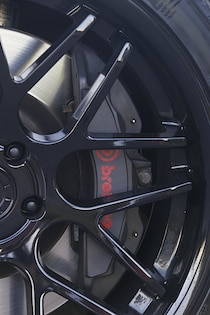