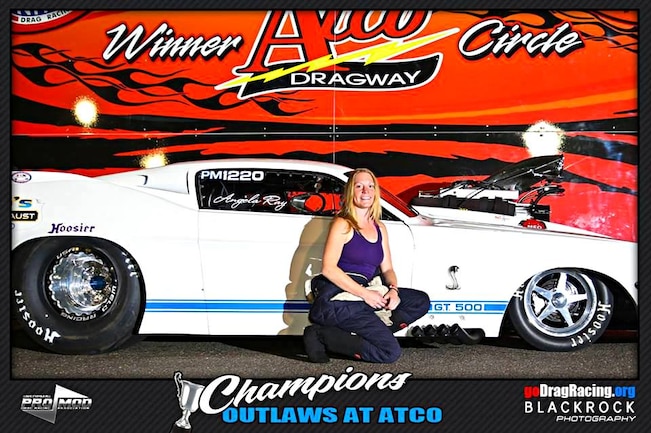 Mustang Girl Monday has traditionally featured women and their nice street Mustangs. A few of them even raced the cars. But Angela Ray Kinson takes it to a whole new level. Her 1967 “Shelby Mustang” has a fiberglass body and a 526ci Chrysler Hemi, but it looks the part and runs really, really fast. Angela runs in the ProMod class in NEOPMA Pro Mod Drag Racing Association. As the sanctioning body says, “Established in 1992, originally we were known as the Northeast Pro Shootout Association. It was formed to provide local Pro-Mod racers the opportunity to provide entertainment for spectators, increase sponsor promotions and advertisement, and help tracks drive more spectator business. Twenty-plus years later, our continued success is proven by its longevity and continues performance in this arena. Recently we expanded the Pro-Shootout to include outlaw cars, including turbo and naturally aspirated cars to provide a broader array of competition and fun for all. We now have a perfect blend of different types of cars, drivers and engine types to appeal to a broad diversity of racing fans.”

For her story, Angela said, “Before I was born my father owned a ’70 Boss 302, white with blue strips and low and behold, 30 years later we ended up with a ’67 Shelby Mustang white with blue stripes! In the drag racing world I compete in the ProMod class. I run a 1/4 mile in 5.80 seconds @ 240mph. Even though it’s not Ford powered, it’s a Hemi 526, we still love representing Ford. When I turned 16 every vehicle I have ever driven has been a Ford. From a Taurus, to an Explorer, to a Focus and now an Edge, but nothing compares to my ProMod!”

Angela and her team race all up and down the Easy Coast, with New England Dragway as their home class. Go cheer her on and tell her Mustang Monthly sent you! Each week Team Mustang Girls features a different female Mustang owner. Submit your story at http://teammustanggirls.com/submit-your-mustang-story/