Kendall Collins Turned The Dream 1970 Maverick Of His Teens Into A Coyote Powered Street Machine! 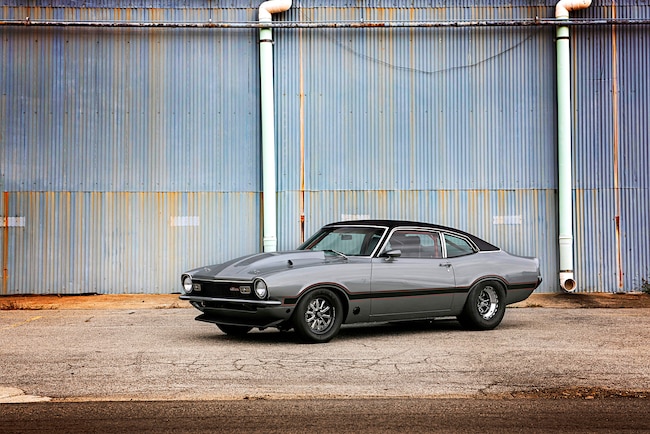 Some dare to be different. Others don’t give it a second thought. It is all they know. Mavericks are non-conformists who don’t take the path of least resistance. Taking the easy way out is just not in their nature.

That is definitely the case for Kendall Collins. As a young man, his father immersed him in automotive performance, but when the elder Collins idled into the driveway in a certain mid-size Ford, everything changed.

“I grew up at the local dragstrip here in Savannah. My dad was a car guy and a drag racer. Car shows and drag races were part of our lives. My dad brought home a 1971 Maverick when I was 14 years old and I fell in love with that car,” Kendall recalled. “It wasn’t long before it went from a street car to a drag car. It was the first real ‘drag car’ that I got to take down the track when I was 16 or 17. Before that I had only raced my street car.”

Originally billed as an affordable family car designed to compete with compact competitors like the Volkswagen Beetle and Chevy Vega, the Maverick was a humble machine never really known for its performance. A 210-horsepower, 302-cube V8 was the pinnacle of its factory powerplants, but like many Blue Oval machines it offered and affordable foundation for performance modifications.

Sprayed in Silver Gray by Gerald Smith and sitting just right on RC Components wheels, Kendall Collins’ Maverick still has those body lines he fell in love with. It does have a few notable alterations, however. That is no Dual Dome hood. It’s a fiberglass Grabber-style hood with a cowl-induction bulge grafted on by Kendall, his dad, and his best pal Dana Brown. He sourced the front spoiler from a 1969 Boss 302, but the rear unit is all Maverick Grabber.
Much like he was smitten with Ford’s Maverick, the thrill of blasting down the 1,320 stuck with Kendall like a slick on a prepped starting line. He kept running at the track for more than a decade before other priorities took precedent.

“I continued drag racing until I was 29 and my son started racing BMX at 4 years old before moving on to motocross. I quit to focus on his racing. I did that until he was 18 and he decided he was done and it was time to move onto college,” Kendall recalled. “At that point I knew it was time to build another car. I had always wanted a Maverick since I was a teenager, so it was what I was going to build.”

Those first loves are always hard to forget. He had other cars, of course, but Kendall always knew he would one day return to the car that first made his heart flutter. Plus, much like the definition of its moniker, a Maverick isn’t part of the mainstream. “Mavericks just make great looking drag cars and they are different,” Kendall said. “No matter where we would go, we would be one of the only Mavericks there, you just didn’t see them. I just really like the lines of the car.”

Appreciating an unusual vehicle is great, but finding one to buy that’s in good shape can often be a challenge. Cars that weren’t appreciated in their day are rarely squirreled away as investments. They are driven regularly, and often into the ground.

Built by Jordan Martin at Modular Head Shop, this 2011 Coyote features Molnar rods, Wiseco Pistons, Comp Cams, Boundary oil pump gears, and stock heads prepped by Maximum Machine Works. It is boosted by a custom twin-turbo system built by Kendall around two Bullseye 66mm turbos. It is obviously going to run hard at the track, but opening the hood always causes a stir no matter where the Maverick is displayed. “The Coyote definitely took it up a notch with how much attention the engine is getting these days and how fast they are,” Kendall said.
Kendall sought a clean Maverick, and he found one that had been stored for nearly three decades. The price was right too. The stage was set for a storybook build of a project he had dreamed of since his youth. Project cars don’t always play out like Hollywood scripts, however. They can be expensive, time-consuming, and frustrating. In fact, some never see the light at the end of the tunnel.

“I started searching Craigslist like mad and I finally found this one in North Georgia for $1,500. It had been in a dry warehouse for 27 years. It wouldn’t even roll. I had to drag it onto the trailer,” Kendall said. “My 70-year-old dad and I worked on it one day a week for the first eight months or so because of limited time. It sat untouched for a couple years as I got tired of working it. I bought a Fox Mustang to play with and traded that for a nice, blue 1971 Grabber.”

After his brief dalliance with a Mustang, Kendall found himself with two Mavericks, but neither quite lived up to the finished product he had dreamed of driving. The first project was at a crossroads, and it almost became one of those in-progress cars you can buy on the cheap.

“I even tried to sell the Maverick. I didn’t want to finish it. Even after I had the suspension done and a cage in the car, I was burned out,” he confessed. “Then one weekend I went to a big race and came back and sold the blue 1971 Grabber to help fund the Maverick. Then I busted my hump for the next year to get it running and driving. At the time it had a twin-turbo 5.4. That motor didn’t last long and the car was down again. I was heartbroken, but I was not going to give up. That’s when I decided to do a Coyote, as prices started coming down on them. I started working all the overtime I could stand to work, 50- to 60-hour weeks, to fund it.”

The interior of Kendall’s Maverick is a bit more serious than the Luxury Décor Option offered back in the day, but the Kirkey seats wear custom covers that mimic the original Maverick interior styling. Daryl Waldrup created the custom roll cage, which keeps the driver safe and provides a secure mounting for the RJS five-point harness.
The challenge of swimming against the tide can take its toll, but if it’s all you know, you just persist. Riding that emotional roller coaster might have been enough to stop the project in its tracks for some people, but Kendall kept pushing with renewed determination and focus. He took the blown engine as an opportunity to do what he had hoped to do the first time around.

“I originally wanted to build a Coyote, but when I started the build they weren't readily available or affordable,” he said. “By the time I hurt the 5.4, they were more available and affordable.”

Knowing that he planned to race the Coyote-powered Maverick, Kendall didn’t just drop in a stock 5.0 and call it good. Instead, he turned to Modular Head Shop to fortify the engine with Molnar Technologies rods, Wiseco Pistons, cylinder supports and more. Topping the tough short-block are stock Coyote heads prepped by Maximum Machine Works with a valve job. Modular Head Shop assembled the heads and selected the grind for the Comp Cams.

Not content to race a naturally aspirated 5.0-liter, Kendall created a custom twin-turbo system based on two Bullseye 66mm turbochargers. He crafted custom turbo headers based on block-huggers and rounded out the exhaust with 3-inch piping. He backed up the turbocharged Coyote with a Turbo 400 three-speed automatic built by Waller and an 8.8 rearend from an Explorer.

Kendall did much of the work himself, but he did receive support from his father, Andrew Collins, as well as his wife Kendra and son Austin. Friends Dana Brown, Chris Fenoff, Jordan Martin, Wild Bill Devine, Daryl Waldrup, and Jerry Waller, and Joey Hiller all chipped in as well.
“Most of the work to the car itself was done in my two-car garage or my driveway in my spare time with some help from my family and friends,” he said.

“It was very challenging, there is not a lot of room in the engine bay of a Maverick,” Kendall explained. “It took a lot of fabrication to get it to fit. As far as going from the 5.4 to the Coyote, it wasn't that bad, as they are very similar in size and design.”

The resulting combination was still pretty fresh at the time of this writing, so its performance statistics have yet to be documented on the dragstrip and dyno. We have no doubt that this car will fly when Kendall races it at True Street events and during Hot Rod Drag Week in 2019. One of the Maverick’s early adventures, however, was a trip a car show held over the Thanksgiving weekend in Daytona Beach, Florida.

“…I drive it on the street as much as I have time to,” he said. “I drove it all around Daytona Beach for six days straight, while attending the Turkey Rod Run. I built the car to run in True Street classes.”

That means it is still streetable, if living on the edge of that classification. Sure, this hopped-up Maverick doesn’t drive like a modern Ford, but it does quite well given the purpose of its build.

“The Coyote is a very street-friendly engine, even when it’s built for high horsepower,” Kendall said. “For what it is, the car rides and drives great on the street, however it is a hot rod set up for drag racing. It’s definitely not a daily driver due to the chassis more so than the engine.”

With over five years and enough money invested to lose count, Kendall finally created a Maverick that he probably never imagined as a teen. When he fell in love with the car, he had no idea it would come to this, but we have a feeling that young Kendall would definitely be in awe of the results.

1972 Ford Maverick Race Car - Pouring The Coals To It

Don Bowles Sr. shows no signs of slowing down in his 1972 Ford Maverick race car despite turning 73 years young. See it for yourself in the January 2013 issue of Modified Mustangs & Fords Magazine.