An iPhone Controls This 1966 Ford Mustang

This Mustang utilizes high tech to facilitate style and drivability 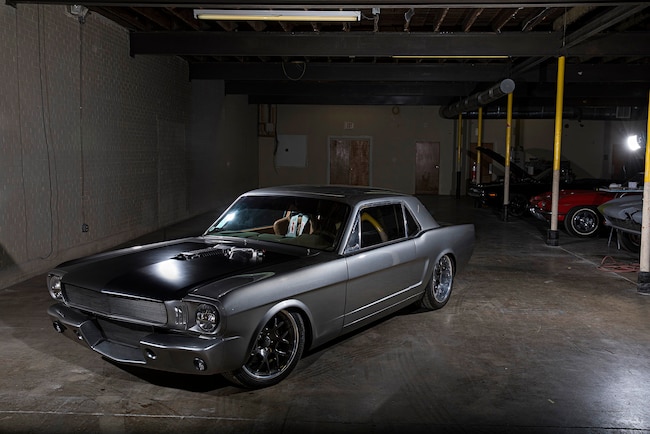 Hot Rodding manifests itself as equal parts passion and money. For some it’s a way to spend a weekend with loved ones. For others, it’s a business. For Geoff Beale, owner and operator of Throwback Customs in Burlington, North Carolina, it’s both love and money. This 1965 hardtop is a representation of his passion and profession mixed into one beautiful vehicle.

The day after Geoff’s father passed, he purchased this Mustang as a rough and rusty project car that needed a lot of work. “When my dad passed I decided to build the car we never built,” says Geoff. “A passion project I picked up with my uncle.” The father-and-son project that never was is now this full-tilt Mustang.

This 1966 Mustang was ThrowBack Customs’ first complete ground-up build. Its humble shop and crew are in Burlington, North Carolina. The car features PPG Tungsten from an Aston Martin, and a G.T. 350 front fiberglass bumper has been molded to fit flush with the body. The stance comes from the body drop over the chassis, Strange Engineering coilovers, and the Michelin Pilot Sport tires measuring P255/40R18 fronts and P295/30ZR18 rears.
Geoff founded a successful electronics company, Crestron Electronics in New Jersey. The company was an education in home electronics, which Geoff used to build the operating system for the Mustang. He sold that business and started ThrowBack Customs; this Mustang was the first car to be built under the new name.

The electronics are a complicated system of different control units talking to each other. Although, from the outside it’s simple and easy to use. A Controller Area Network (CAN Bus) system connects the separate pieces of the electronic system, allowing the entire car to be electronically controlled. The power windows are controlled by an InfinityBox inMOTION along with three separate InfinityBox-brand Powercell Kits located under the hood, inside, and in the trunk.

The body is slammed onto the Art Morrison MAXG chassis, with Corvette C6–style front suspension and a three-link in the rear.
The large dash-mounted LCD controls the locks, door poppers, hood and trunk latches, and even displays the three rearview cameras. This system allowed the team to shave the side mirrors and door handles without sacrificing usability. All of these items can be controlled via a Bluetooth-enabled device like Geoff’s iPhone.

An InfinityBox Mastercell is overlaid by a custom Crestron Electronics system, which you’d normally find in home entertainment automation; it powers the center screen’s operation. Geoff and InfiityBox’s Jay Harris wrote custom code for the display and user operation, aka anything the driver sees on the screen. This screen then takes the user’s input and communicates it to the InfinityBox Mastercell, which tells the car what to do via the PowerCells found at each end of the car. Finally, an inVIRONMENT controller manages the Vintage Air system.

“The gauges, starting the car, and controlling the A/C and stereo are all done from either the touchscreen in the car or from an iPhone app,” says Geoff. “Graphics and controls are custom code written by Jay and I.” It’s a complicated system that results in a user-friendly Ford.

The Coyote 5.0L crate engine was one of the first offered by Ford Performance. It’s topped with a Ford Performance supercharger and made 515 hp at 6,200 rpm and 440 lb-ft at 5,700 rpm on Shrader Performance’s chassis dyno.
Under the hood it’s a little more traditional, with a Ford Performance Coyote 5.0L crate engine with 11:01 compression and MMR Stage 2 cams. The 2.9L Whipple supercharger is accompanied by Injector Dynamics ID1000 injectors backed by an Aeromotive fuel rail and regulator. The Rick’s Tanks stainless steel gas tank features an Aeromotive A1000 pump inside.

Exhaust is by way of custom-built shorty headers dumping into 3-inch pipes and Borla mufflers. The car was chassis dyno’d and tuned by local Ford wizard Shrader Performance. It made 515 hp at 6,200 rpm and 440 lb-ft of torque at 5,700 rpm on Steve Shrader’s dyno. The engine is backed by a Ram dual-disc clutch, Quick Time bellhousing, and Tremec six-speed. Out back is a Strange 9-inch with a limited slip and 3.89 gears.

The supercharger pulley is a 3.875-inch unit that was intended for the Chevy Suburban supercharger. The engine is controlled by the Ford Performance Controls Pack and tuned using SCT software.
The hole in the hood makes you do a double take when first looking at the Mustang. It allowed Geoff to keep a stock hood with the supercharger. What caught our eye were the subtle touches in the body that left us scratching our heads. The only original Mustang sheetmetal includes the roof, trunk lid, and hood. All of the exterior trim was shaved from the door handles to the emblems. The rear bumper was molded onto the car, and handbuilt fender extensions bring the body out to the rear wheels.

The body was dropped onto an Art Morrison MAXG chassis, which features the company’s own Corvette C6–style front suspension. The Mustang’s floorpan was completely removed and replaced with a custom dropped floorpan in order to improve legroom, despite the dropped body. Out back is a three-link with Strange Engineering coilovers. Murphy Rod & Custom of Summit, North Carolina, performed the bodywork and L&S Customs of Prospect Hill, North Carolina, did the paint with a PPG Tungsten from a 2012 Aston Martin.

The only controls—those in the two touchscreens. The Grant steering wheel was heavily modified and wrapped by JNG Creations of Pittsboro, North Carolina; the company did the entire interior. Corbeau seats were recovered in a Chocolate and Tan leather. The Vintage Air system and JL Audio system, hidden in the trunk, can be operated via Bluetooth.
While the car is near to Geoff’s heart, it served its purpose as the first car to feature his shop’s name. Soon after our photo shoot, the car was sold to raise funds for future projects. “It was difficult to let go, but ultimately, I enjoy building and I’m ready for a new challenge,” says Geoff.
The wheels are Rushforth Night Trains and the wheelwells were slightly stretched in order to clear the wider 255-series front tires.
All of the sheetmetal in the rear is molded together, producing a beautiful silhouette.
The gas cap is from a Ferrari and was made usable without opening the trunk by this unique setup.