41X: the Lightest, Most Stripped-Down 1989 Mustang You Could Buy 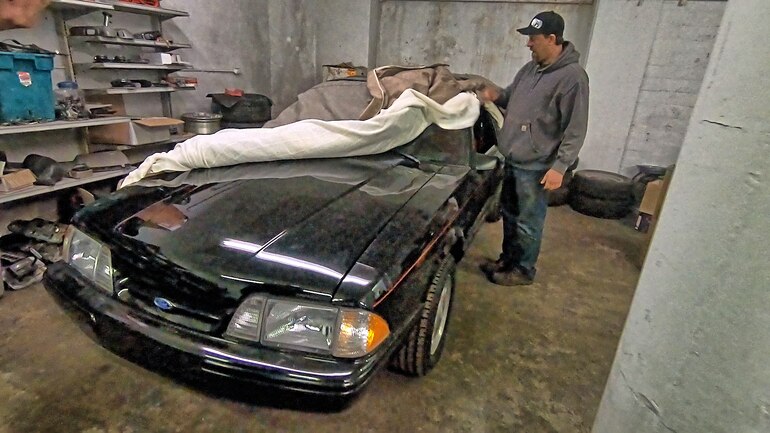 In the back of an old shop—in a 100-plus-year-old boiler room—in urban Cleveland, hid a 1989 Mustang LX 5.0L that had been parked and covered there since 1999 or 2000. Lewis Lukanc, aka Lew, told us, “The paperwork that the Ford dealership gets when the order is placed revealed a peculiar option list” on this Mustang. “It didn’t just list not having options; it listed what options you couldn’t get due to this one particular code.” Lew referred to code 41X. What was this, a secret code?

The mystery of 41X is one reason Lew threw a cover over and parked the LX he found and bought from a Ford engineer that worked out of the Brook Park engine building plant, located right there in Cleveland. That engineer, it turns out, was very active in the Ford Performance Club of America.

Lew pulled back the cover to show us a near mint 1989 Mustang LX 5.0L with the 41X “delete option package.”

The president of that club was a guy named John Vargo. Lew has researched that Vargo told the engineer about this obscure code, 41X, that programmed the assembly line to build the most stripped-down and lightweight ’89 Mustang in either coupe or hatchback, but not convertible. But salesmen on the showroom floor always want to sell options and accessories, making 41X a code Ford did not want widely circulated.

Lew knew nothing of 41X when he found this ’89 LX advertised in a classified almost 20 years ago. What he did know was stock or low-mileage Fox 5.0L Mustangs were “just impossible to find,” in those days. Although they were not yet collector cars, these Mustangs were muscle car alternatives and were very popular as street racers or all-out race cars.

Lew was fairly young, but by 1999 had owned 30 to 40 Fox Mustangs, including a couple of low-mileage GT convertibles for his wife. He went back to the classified ad for an ’89 Mustang 5.0L LX modified with Ford Racing parts. The mileage listed was so low that when Lew called he asked, “The parts have 2,000 miles on them?” The reply? “No, the car has got 2,000 miles. It still has the original clutch.”

He was sure somebody else would beat him to this deal if he took the hour to drive from his place in Cleveland, Ohio, north to Medina. He called a friend who lived in that county and told him, “Drive over there. If the car is real, just give the guy the money.”

The steering wheel is plain with no controls for cruise control, which would have been an option and not allowable with 41X. 1989 was the last year without an airbag.

With the ’89 Mustang LX back at his shop, Lew found some minor bolt-ons from Ford Racing, including a larger mass air meter, 24-lb/hr injectors, and a different rear gear—modifications that Lew removed to return the car back to 100 percent stock. The car did not accrue many miles its first 10 years. The Ford engineer used the LX primarily for local cruises and car shows, and to trailer to Norwalk once a year to put it on the track [Summit Motorsports Park] for Ford Performance Club of America events.

Lew is fully immersed in the car culture and performance Mustangs. In the late 1970s and early 1980s, his older brother picked him up from elementary school in a Trans Am–prepared Boss 302 built by Larry Nagle. He likes classic 1965-1973 Mustangs, but his new-car experience is embedded in the 1980s and 1990s, when he came of age. Today, the Fox Mustangs have become a hit with collectors like Lew.

This ’89 is the LX coupe. The 41X option package was available on every body style except the LX convertible. According to Kevin Marti, there were a total of 1,132 Mustangs produced with option code package 41X. Marti adds, “It was similar to the Competition Preparation option available on the 1984-1986 Mustang SVOs.”
For 5.0L Mustangs, Lew has stocked up on parts, which are much harder to find than in the old days of hunting parts for vintage Mustangs. That’s because computers did a much better job of tracking inventory and saving money when these cars were new.
The 5.0L was rated at 225 hp and 300 lb-ft of torque; 1989 was the first year for mass air in all 50 states, with California cars getting it the previous year.
Tires are original, vintage 1989.
This dealer order sheet reveals 41X doing its job of programming the assembly line to delete options—no air conditioner, no power door locks, no power windows, no premium sound systems, and no dual electric remote mirrors.
The coupe is the LX—the one drag racers like for its lighter weight that was even lighter with 41X.
The red cloth seats are mint. Black paint and red pinstripes are factory original.
Now is the time to hunt OEM parts, such as these stock 1989 tires.
The engineer that bought this car new saved the Ford folder that held the paperwork as the Ford engine traveled down the assembly line at Brook Park. He hand-selected his own block and might have even helped with assembly. Presently, we do not know the full import of the 41X. However, we have a feeling this code, visible on the dealer order form, will become a performance buzzword among Fox enthusiasts.