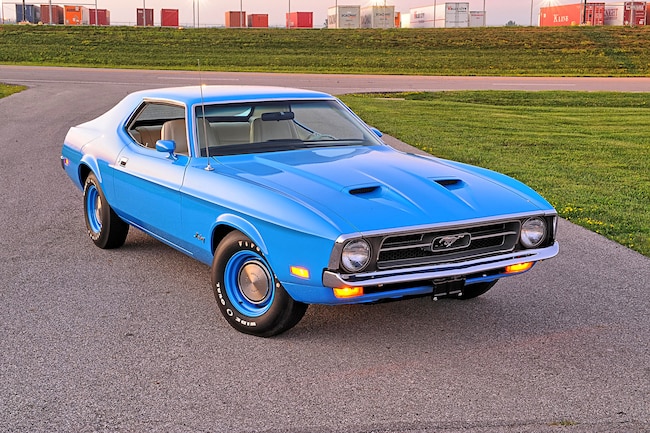 This is our fourth consecutive spotters’ guide to Mustangs, this time showing the differences between the years of the “big Mustangs,” 1971 through 1973, which are some of the most subtle design changes in all of the Mustang’s first generation. The biggest differences in the ’71, ’72, and ’73—the longer, lower, wider Mustangs—has to do with the upgraded models of Mach 1, Boss 351, and Grandé, not to mention the specialty Sprint edition of 1972½.

Readers are very aware Ford made major changes to the Mustang for the ’71 model year with a radically new body style that continued through 1973. The 1971-1973 model hardtop, convertible, and SportsRoof are still considered the “first generation,” a direct link to the 1965-1970 models. Why is this?

Underneath, the ’71-’73 models share the same basic Unibody construction of the ’65-’70 Mustangs. Coil springs still ride on top of upper A-arms utilizing shocks inside shock towers. The rear suspension remains a straight axle anchored with longitudinal leaf springs and shocks.

The car looks much longer, but the wheelbase increased by only a single inch from 108 to 109. The engine bay is larger to fit a new “385” series of 429 big-block engines that were scheduled to increase to over 500 cubic-inches in the muscle Mustangs (that got canceled).

When the big-block program ended after the ’71 model year—same for the Boss program—the ’72 model was a ’71 with very minor changes hardly visible from afar. For example, in 1972, Ford attached “Mustang” in script above the right taillight, which replaced “MUSTANG” block letters across the rear of the deck lid. Another subtle 1972 change that is identifiable by the sharpest of Mustang critics is the upgrading of the 1971 Grandé dual-accent paint stripe to a two-tone, which was carried into 1973.

The 1971 Mustang, seen here in a hardtop, continued Mustang’s styling theme of a long hood, short rear deck, and a high-mounted front grille.
The grille of 1971 (and 1972) Mustangs is hauntingly familiar to a 1965 Mustang grille, featuring a running horse in a “corral” flanked by bars and set against a honeycomb pattern.
For 1973, the look of the grille changed. Mustang kept the same grille size and shape, but made the honeycomb pattern larger and attached a Mustang running horse and corral with short vertical bars at top and bottom. Headlights for ’73 are also surrounded by a new chrome, rectangular bezel.
The 1971 Mach 1 has a honeycomb textured grille centered with a Mustang running horse and a set of amber fog lamps. Every Mach 1 came with a urethane front bumper.
The Mach 1 grille and urethane front bumper continued for 1972 with no changes.
Although the 1973 Mach 1 had the same basic layout as the 1971 and 1972 Mach 1, the ’73 utilized chrome headlight bezels, new fog lights, and honeycomb grille layout specific to 1973.
The Boss 351 came with a Mach 1 grille and a chrome front bumper.
Front fender script identify the Boss 351, which was 1971 only.
The rear deck lid also identifies a Boss 351, which came with a standard gas cap and a rear wing spoiler.
Side stripes were not part of the Mach 1 package for 1971 (seen here) or 1972.
Side stripes were a popular accessory on a 1971-72 Mach 1, as seen on this ’71 model.
Tape stripes on the body side were part of the 1973 Mach 1 package.
The lower body side tape stripes on a 1973 Mach 1 incorporate “Mach 1” on the rear quarter panels.
The 1973 Mach 1 tape stripes extend across the rear deck lid and incorporate “Mach 1.”
One way to spot a 1971 Mustang is the presence of “MUSTANG” in bright block letters on the rear deck lid. (NOTE: Except Mach 1 and Boss 351.)
1972 and 1973 Mustangs have “Mustang” in script on the passenger side of the deck lid (except Mach 1).
The shape of the SportsRoof body remained unchanged for 1971-1973. This is a ’71 model.
The front Mustang is a Boss 351 because the bumper is chrome and the grille is Mach 1. The back Mustang is a Mach 1 because the bumper is urethane. Both cars share the same side stripe, which was standard on the Boss 351 and optional on the 1971 and 1972 Mach 1.
Side stripes were part of the 1971 Boss 351 package and shared as an extra on the 1971-1972 Mach 1.
Both the 1972 Mach 1 and the 1971 Boss 351, seen here, came with a standard gas cap.
The 1971 Mach 1 came with a pop-open gas cap cover.
This 1971 Mach 1 has the optional Boss 351-type side stripe.
This ’72 Mustang convertible has the optional Mach 1-type side stripe.
This 1972 convertible has both the urethane front bumper and the optional Mach 1-type side stripe (only when equipped with Exterior Décor Group).
If it’s red, white, and blue, the ’71-’73 Mustang could be the unique Sprint model that Ford introduced in February of 1972. The front grille is Mach 1 with a color-keyed front bumper.
Boss 351, Mach 1, and Sprint models use a classic running horse and tri-color bar in the center of the honeycomb texture grille.
The rear quarter panels on Sprint Mustangs of 1972 came with a large USA shield emblem.
The ’71-’73 Grande is easily identifiable by its full vinyl roof with Grande script.
“Mach 1” is centered on the back of the deck lid on 1971-1972 Mach 1s. The pop-open gas cap cover identifies this Mach 1 as a ’71.
A two-spoke steering wheel was standard for 1971.
1971 and 1972 had an optional three-spoke steering wheel.
The two-spoke deluxe steering wheel that was optional in 1971 became standard in 1972.
The popular aluminum Hurst T-handle was stock on the 1971 only. This handle was replaced with a black knob in 1972.
In 1973, the standard steering wheel was a Deluxe two-spoke with wood-grain insert. (NOTE: the Hurst T-handle is not stock for 1973, but owners often replaced the black round knobs).