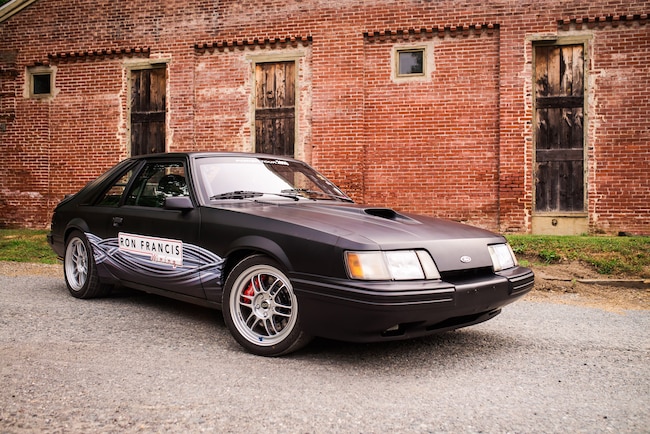 Before the 2.3L EcoBoost Mustang of modern day, the SVO Mustang was the talk of the town when it came to turbo-charged four-banger Mustangs. First produced in 1984, the SVO Fox-body was equipped with a turbo 2.3-liter mill and is much rarer than its modern brethren with less than 10,000 units produced during its three-year run. It’s easy to spot with its unique SVO styling and is usually flocked to by enthusiasts at any car event.

In its stock state, the car was rated at 175 horsepower and 210 lb-ft of torque. That might not seem like much by today’s standards, but that was coming out swinging back in the day. To put it in perspective, that was the same amount of power as the same year 5.0L V-8 that sat next to it on the sales lot with just 35 lb-ft less torque.

Ron Francis Wiring was ready to test out their wiring kits for the Coyote. With this 1984 SVO shell, they had a 2012 Coyote engine in-house and decided to build Scott's SVO with a modern heart transplant with their new wiring kits. As soon as the build was done, they decided to show off the product and test the build with a 2,800-mile journey - the 2018 Hot Rod Power Tour.

It’s safe to say that Scott Bowers, president of Ron Francis Wiring, is a fan of the SVO. This 1984 SVO is third, and the one that he still owns to this day. However, this specimen is far from its factory roots and is most definitely considered powerful by today’s standards with all the work that was put into it. Aesthetically, this car features the 1986 aero headlights and retains the unique SVO spoiler and hood.

“I found this car/shell on a forum for cheap and thought as long as I had the garage space, it would be good to hold for a future project,” the Wilmington, Delaware-resident explains. “I grew up lusting after SVOs so this was a perfect little match.”

Ron Francis Wiring company manufactures aftermarket wiring harnesses for the automotive industry, and they were in the process of getting their wiring kits rolling out for the Coyote Mustang. “Once our Coyote Wiring Kits got sorted out, we had a good Coyote engine in house and figured it would be a good candidate for the SVO shell. If we built it right, it would be a good way to show off our products,” Scott says.

Here's a glimpse of the Ron Francis Wiring kit for the Coyote.

After sitting as a shell in Scott’s garage since 2012, it was time to bring Scott’s SVO back to life with a new heart. Soon, the car was powered by a 2012 Coyote motor complete with the new Coyote harness by Ron Francis Wiring. Right after the transplant and a few goodies later, it was time to put it to the test. And what better way to put this new Coyote harness to the ultimate test and show off the product than to take it straight on the 2018 Hot Rod Power Tour.

“We got the car finished just in time for the 2018 Hot Rod Power Tour and campaigned it in the Sponsor Shootout,” Scott says. “The car did great on the tour making the 2,800-mile trip without a hitch.” The car performed flawlessly during the Hot Rod Power Tour and even nabbed 30 mpg on the highway stretches. Those that are familiar with the HRPT know that it’s a grueling task between driving long distances winding through multiple states and then head straight into various track activities sprinkled throughout the week-long event.

“The best track time on the Power Tour was a 12.3. We were limited to one set of tires for the entire campaign and the DOT autocross tires on the car didn’t do too well; first and second gear traction was a major issue. We’re hoping to get a pair of slicks on it soon and track see some quarter-mile numbers we know this car is capable of.”

Take a peek inside the car to see the switches for Ron Francis Wiring. The Racepak dash lets Scott know how the car is performing while on the road. It took on the Hot Rod Power Tour journey without a hitch.

Helping to shift all that power is a T-56 transmission from a 2003 SVT Cobra with an SFI approved bellhousing. Additional shifting is provided by an ACT lightweight flywheel and Centerforce clutch. Also added to the mix is an aluminum driveshaft complete with a safety loop. Upping the performance while amplifying that V8 rumble are BBK headers that flow down to Magnaflow dual 3-inch exhaust pipes. Steering comes from a power rack out of a 2003-2004 Cobra.

Beefing up the back half is a 9-inch rearend with 4.11 gears and Quick Performance 31-spline axles. Custom welded subframe connectors were installed to keep the chassis nice and stiff while making sure the car handles and launches better than ever. A tune by Evolution Performance out of Aston, Pennsylvania, was added to the Coyote-powered SVO to tie everything together and ensure that it runs smoothly.

You know what they say - safety first. A custom 8-point roll cage by Ron Rhodes of Townsend, Delaware, has been added to the interior to keep Scott safe and enclosed. Custom welded subframe connectors Also sitting inside the interior are two Kirkey Race seats equipped with a five-point harnesses.

Complementing the exterior of the SVO are Enkei RPF1 wheels wrapped with Toyo Proxes RA1 rubber. Hiding behind the wheels are Wilwood brakes to help bring everything to a quick halt. Once a maroon color, the PPG Matte Black was sprayed on by Jerry McCarthy out of Northstar, Delaware.

On the dyno, this bad boy made 460 rear wheel horsepower, a far cry from when it first came out of the factory gates in the ‘80s. “My idea was to build a fun fast track car that we could get through inspection and make track legal,” Scott says. “Overall, the car performs great. It has great manners. Fast, nimble and fun. Comfort is only compromised by the lack of heat and air conditioning.”

Now that the car has been completely built from the shell up and conquered the Hot Rod Power Tour, now the plan is to attend additional events and have more fun with the SVO build. “We hope to compete in some east coast autocross and time trial events as time permits,” Scott tells us. 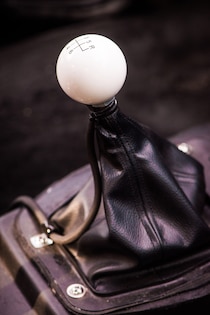 Take a look at this Readers' Album for April 2014. A duo of Mustangs, a 1966 Ford Mustang Hardtop and just a few more 'Stangs to catch your eye.

Check out Mark and Jackie Cuomo's coyote swapped 1984 Ford Mustang T-top coupe! Both of them fell in love with the T-top, and Mark wanted to build his wife a reliable Fox. It's a swap that's taken over like wild fire, and Ford enthusiasts have taken to it like Camaro owners to mullets.

How to Install the CXRacing Twin Turbo - Wild Deuces

Check out how to build a Fox Mustang with the CXRacing twin-turbo for 1986-1993 Ford Mustangs! We use Greg Montoya's EFI'd 1984 Ford Mustang coupe to install CX's twin turbos. Until now, we haven't seen a complete intercooled turbo system for as low a price as the kit we're working with in this report.

The AmericanMuscle car show never disappoints. Set in the rolling hills of the countryside near Malvern, Pennsylvania, the show provides Ford and Mustang enthusiasts with a chance to see over 1,000 Mustangs in one day, but also to meet industry icons and find some great deals on parts for your fast Ford.