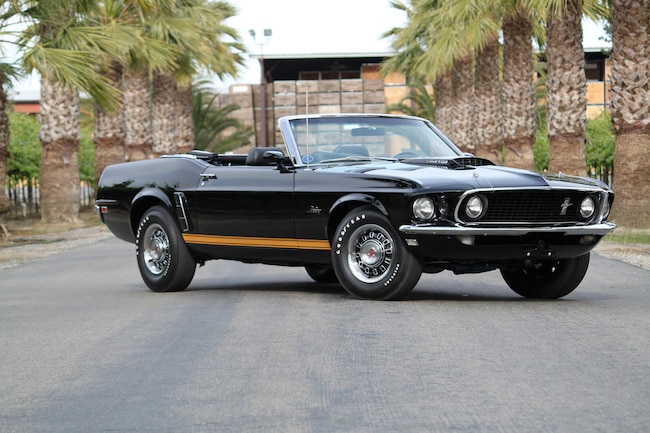 Early in the Mustang restoration hobby, a 428 Cobra Jet Mustang convertible was thought to be a mythical creature, like the Loch Ness Monster or Bigfoot. Cobra Jet ragtops were believed to exist, although few had ever witnessed one.

Jack Brooks attended numerous Mustang shows in the 1980s, concentrating on his favorite model years—1969 and 1970. He thought the ultimate pony car would be a 428 CJ 1969 convertible. His Mustang buddies agreed that surely Ford had built a few, but in all their show-going, there had been no actual sightings. In 1986, Jack acquired a project R-code ’69 Mach 1 with a four-speed. What he remembers most about this transaction is that when he went to pick it up and was preparing to leave, the seller told Jack to “wait a minute” while he retrieved the Shaker hoodscoop assembly from the garage. Jack wasn’t planning on restoring the Mach 1. Instead, he was preparing to swap the drivetrain into his ’69 302 convertible, creating a tribute car well before Barrett-Jackson made it a household word.

Jack finished the transformation and enjoyed the car that way for years. Then he noticed that authentic CJ convertibles were popping up in the Mustang magazines. Seeing these factory-built, muscle car drop-tops in periodicals really got to Jack. “I just gotta have one,” he says. Plus, he wanted to restore a Mustang to a high level. So Jack set his sights on finding an elusive 428 convertible. This was in the pre–Marti Report days, so no actual production numbers were known. What was apparent was that very few were manufactured.

In late 1992, Jack came across an ad in Hemmings Motor News for a project ’69 428 GT convertible in Colorado. Trouble was, it was being sold as a pair with a restored ’69 428 CJ Grande. Although both cars were black four-speeds—a scintillating duo—he couldn’t swing the purchase price of two Mustangs. Since Jack was living in Colorado at the time, he called the owner, Kris Kanack, and made arrangements to inspect the convertible.

Jack found the car to be complete with just 52,000 miles, but it had been off the road since 1976 after being involved in a minor accident. Though it had been roadworthy for only seven years, it had been repainted several times, including a gold shade for a while. It was definitely a project, but it could be brought back to life with some blood, sweat, and dollars.

Jack’s dilemma was prying it away from Kris minus the Grande. But Kris was firm that the two would be sold together, since he was trying to finance the restoration of a ’69 Shelby G.T. 500. However, Kris was willing to have Kenn Funk (who you may remember as the prior owner of our two 1968½ CJ cover cars in the October 2018 issue: mustang-360.com/featured-vehicles/1807-a-tale-of-two-super-cobra-jets), who was interested in the Grande, contact Jack. This broke the logjam. The deal was made, and Jack towed home the ragtop while Kenn had the coupe shipped to his Glendale, California, home.

In 1997, while preparing for the CJ’s renovation, Jack moved to California. He also began looking into the rare Mustang’s past. He traced the history back to 1974 and the second owner. After being delivered new to J. Baglier Ford Sales in Girard, Ohio, the convertible somehow wound up on the West Coast. The second owner purchased it from a local used-car lot while stationed at the Treasure Island Naval Base in San Francisco. When the owner was discharged from the Navy, he moved to Denver, where the aforementioned accident occurred. The car passed through other unknown owners before Jack acquired it.

When the Marti Reports finally became available in 1999, Jack learned his Q-code GT convertible with four-speed transmission was just one of nine built in 1969. All total, there were 122 Q-code and R-code convertibles manufactured that year. The report also noted the options it left the factory with: rectangular electric clock, console, power front disc brakes, AM radio, and color-keyed racing mirrors. Though not mentioned on the Marti Report, Jack’s GT also has the rare, color-keyed Styled Steel wheels.

Behold the mighty 428 Cobra Jet engine! In this engine’s first year, 1968, the air cleaner had a butterfly valve on top that ducted fresh air through the hoodscoop, but became standard non-ram air in 1969.
The ’69 CJ scoop delivers fresh air to the engine compartment, just not in a straight shot into the air cleaner.

When Jack was ready to restore his CJ, he chose Armond D’Agostini in Lehi, Utah, to handle the paint and bodywork. A rotisserie restoration followed, with Armond laying down the single-stage Raven Black finish with just the proper amount of orange peel. Jack handled most of the remaining work himself.

Naturally, he encountered some obstacles. One was finding a correct driveshaft. With the help of a local agricultural company, Jack produced a concours-correct driveshaft. When others saw the finished product, they wanted one too; from there, his company, Dead Nut On, was born. Jack has gone on to produce other concours-correct niche parts, including brake booster hoses, air cleaner breather hoses, and more.

The restoration was completed in September 2006…sort of. Jack entered the CJ in the Mustang Club of America (MCA) show in Las Vegas, but the car was missing the exhaust system and a few other items. Nevertheless, it won a Silver award in the Concours Trailered class. Since then it has been awarded two Golds, one at the MCA National in Concord, California, in 2007 and the other at the MCA Grand National in Park City, Utah, in 2008. It also won a First Place trophy at the Fresno Concours d’Elegance in 2009 in the Muscle Car category. Former MCA Head Judge Charles Turner once wrote on the Vintage Mustang Forum that the best score he had ever given a car was to this CJ at the Concord show, though he did state his knowledge of ’69 Mustangs was somewhat limited.

Still, it shows Jack’s attention to detail. That must be what he meant years ago when he said he wanted to restore a car to a high level. Mission accomplished, Jack.

Even the correct Dill valve stem caps have been utilized. Wheels are the rare color-keyed Styled Steel wheels with chrome inserts in the wheel slots.
A quality restoration leaves no part of the car untouched.
The radio ground strap has the correct brass plating and is facing the engine compartment like most Dearborn-built 1969 Mustangs.
Note the Autolite oil filter is painted blue like the ones that came off the assembly line.
Shocks are painted semi-gloss black with an orange paint daub to signify heavy-duty suspension.
Proper amount of body-color overspray covers the floorpans and framerails. Note markings and machine surfaces on the third member.
Upper control arms are correct with their shiny, stamped-steel finish. They also have the correct four rivets attaching the upper ball joint.
The all-important fifth digit in the VIN shows the car’s provenance—in this case revealing that it’s a Q-code.
Brooks’ Cobra Jet has the correct amount of pedals—three.