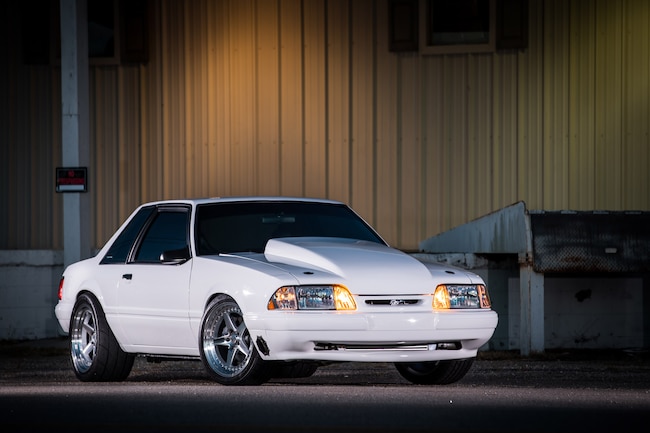 There are many enthusiasts who can open their garage and showoff the exact Mustang that they drove to high school twenty years ago, a car that is very much a part of their family and will never be on the selling block. Then there are people like Brandon Hitchins whose thrill comes from building the vehicle and then sell it once they reach the finish line. Brandon has already built many Mustangs and he is only 32 years old, but his 1992 Mustang LX could be the one he keeps.

Generally speaking, Brandon focused his car building efforts of either the SN95 body style of 1994-1998 or New Edge Mustangs of the 1999-2004 model years, with an affinity for the Terminator generation of SVT Cobra. In fact, he has had several different Terminators with the last one being a boosted monster that should’ve turned heads wherever it was displayed.

“Nowadays, you can only do so much to a Terminator to try and be different, but it is hard to stand out,” he shares. The solution was to move away from the more modern Mustang look and go back to the classic Fox-body notchback, rework it a bit and have fun. With the Terminator sold, for good money according to Brandon, the hunt was on for a suitable Fox-body meeting his high standards. “I wanted a low mileage and one-owner car,” Brandon confesses.

The car was completely stripped down and refurbished in white, replacing the car's original black exterior. Brandon took the time replace all of the moldings, rubber trim, and bolt it back together with either ARP, stainless steel, or Grade 8 bolts.

The dragnet led him north, up to Virginia from his South Carolina home state, to inspect a car that might fit his strict criteria. A gentleman who lived so far in the mountains that there weren’t any mapped roads on the GPS offered a rare car for sale. The road trip was worth it because the car was flawless, featured a one-owner status, and it had logged a mere 37,000 miles on the odometer. Brandon hauled down the mountain with his next project car and the first Fox-body Mustang he ever owned.

It didn’t take long to discard the anemic 225hp 5.0L High Output in favor of a boosted bullet. A ProCharger D-1SC provided boost to a 331 stroker engine and with it came 500hp. The notchback’s appearance was dramatically changed to go along with the fortified powerplant under the hood. The original black paint was replaced by Dupont Pure White after Brandon stripped the car completely down to the bare uni-body so the color swap would be done properly.

In addition to new paint, the car was freshened with brand new parts like weather striping, moldings, and all the nuts and bolts are either ARP, stainless steel, or Grade 8. Everything was touched for the better. The finished product was a clean coupe that was pretty quick on the street, until one day the input shaft snapped inside the T-5 transmission. “I kind of went all out after that,” he muses about the next step he took with upgrading the coupe.

The factory 302 was pitched to the side in favor of a 365ci engine that is based around a Dart engine block to ensure longevity in the turbocharged combination. The car spun the chassis dyno to 900rwhp with just 12 psi of boost through the Tremec six-speed. Brandon estimates it can make 1,300rwhp with the turbo turned up to 30 psi.

Being the speed demon he is, the engine was first to get replaced and the engine bay saw a larger 365ci engine using a Dart Iron Eagle block, built by Jim Woods. The rotating assembly consists of a Lunati forged steel crankshaft, Carillo connecting rods, and Wiseco pistons (10.5:1). The camshaft is a custom roller stick that was cut by Comp Cams. A pair of Trick Flow 11R cylinder heads with 205cc intake runner were selected and paired with an Edelbrock Victor Sr. intake manifold that now houses a set of 160 lb/hr fuel injectors, aluminum elbow, and Accufab 85mm throttle-body.

The factory A9L computer was ditched in favor of a Holley EFI Dominator engine management and Alan “Lucifer” Evans from Texas handles the tuning chores. Also ditched was the original chassis wiring and it was replaced with American Autowire. Other components to help the engine run include Holley EFI Smart coils and dual-sync distributor, Brisk spark plugs, and three 465 lph fuel pumps. Backing the small-block Ford is the job of a Tremec T-56 Magnum that was modified by Liberty Transmissions.

The fortified engine with its ample fuel and spark supply, along with the beefy transmission are required because Brandon opted to get a little crazy with the addition of a large single turbocharger. The unit is built by Forced Induction and uses a Borg Warner S488 chassis and it measures 88mm. On just 12 psi the car has produced 900rwhp, plenty of fun on the street but Brandon hasn’t taken it to the track because it doesn’t have an NHRA-legal roll cage. Keeping the cage out and resisting a change to an automatic is the reason this Mustang continues to be a street car only. He is confident that the engine is capable of 1,300rwhp if he turns the turbo up to 30 psi.

Brandon might not spend his weekends at the dragstrip but that doesn’t mean the car isn’t equipped with the right suspension parts for a car of this caliber. He ordered the complete UPR setup with Viking struts for the front and tubular upper and lower control arms, anti-roll bar, and Viking rear shocks. Keeping the rear suspension connected to the uni-body is the job of Wild Rides Battle Boxes. The 8.8 housing was braced and welded to ensure it doesn’t bend when Brandon jumps on the throttle and power-shifts his way to triple digit speeds. Other driveline upgrades include Strange Engineering 35-spline axles and spool with 3.73 gears.

A big part of the fun has been driving the car on the street with a Tremec stick-shift transmission. Brandon told us that he is resisting a swap to an automatic for fear he will lose control and turn the flawless coupe into a drag car.

With an obscene amount of money invested in the car, you wouldn’t believe us if we told you, Brandon says he didn’t benefit from fancy sponsors or rich parents. He works hard as an automation engineer at the local BMW plant. One company that does help him is Fox Body Composites and they make interior and exterior carbon fiber parts found throughout his ride.

“I wanted to stand out and the Fox-body is so different,” Brandon tells us and admits that it even gets a lot of attention at events like Mustang Week from fans that probably weren’t born when the car was produced. “It drives so nice and I keep telling myself I am not going to turn it into a drag car!” After numerous other Mustangs, this one seems to be Brandon’s favorite and we are sure he is going to hold on to this one a bit longer than the others. 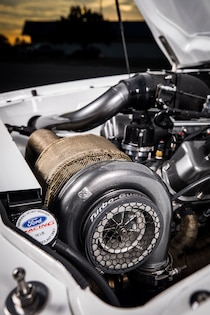 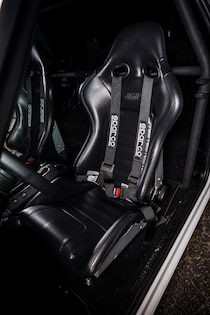