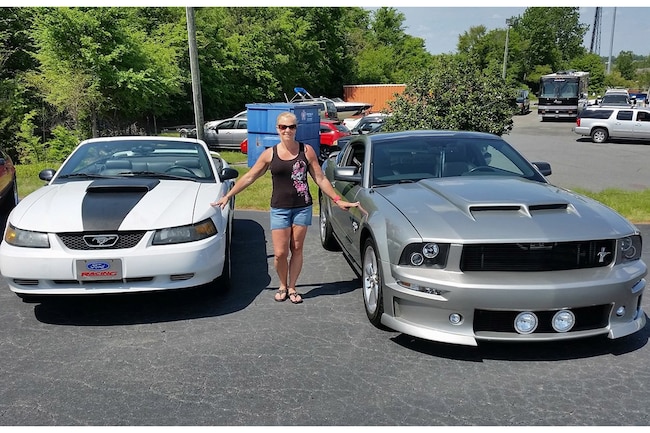 It's the day you've all been waiting for, Mustang Girl Monday! And today we would like to introduce Julie Monticciolo and share her Mustang story.

She tells us, "My dad was a car guy so I guess it’s in my genes. I love all cars really but fell in love with Mustangs when a guy I dated in high school had a classic pony. I never thought I’d have my own but in 2007 I ordered my first from the factory made to my specs. It was a Vista Blue V6 Pony package. I had it for 2 1/2 years before I decided to join my first club, the Chicagoland Mustang Club. As the mod bug bit me, I started to save money to make some changes to my pony but the guys in the club encouraged me to look into buying a GT. So in the spring of 2010 I traded in my V6 for my 2009 45th anniversary glass top GT! And yes I cried as I said goodbye to my first ever Mustang. I named her Sexy Sadie as it just seem to fit. I used to race her on the quarter-mile track but I don’t anymore. I’ve got way too much money tied up in her to chance wrecking her.”

Julie continued saying, “As you can see she is heavily modded. I’ve also changed the headers, cams, exhaust, and tune on her. She is my pride and joy. 3 years ago I bought a 2nd pony as a daily driver so Sadie can be show ready at any moment. My 2001 V6 convertible is named Sprout! It didn’t even run when I bought it but my husband has helped me fix it up and it’s running strong with over 280,000 miles on it. I’ve had so many Mustang adventures and met so many friends along the way. I’m a diehard Mustang girl for sure!"