Yes, American Legends Hot Rods and Muscle Cars built a 1968 Mustang hardtop into a radical restomod with a Ferrari F430 engine, and called if Corruptt. 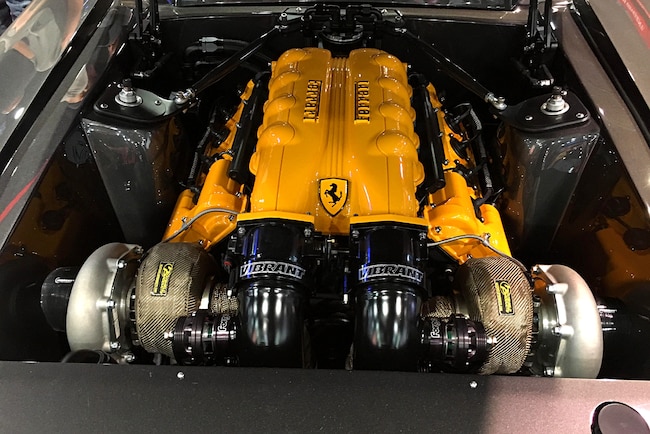 Nothing makes us angrier than an LS-swapped Mustang, or really any Mustang with a non-Ford engine. It’s just wrong on so many levels. But if you HAVE to swap an engine into a Mustang that doesn’t have a Blue Oval cast onto it somewhere, we’re at least a little bit okay with using a foreign exotic engine, and of the existing exotics you can’t get more radical than a Ferrari 4-cam V8. That’s precisely what American Legends Hot Rods and Muscle Cars (alhotrods.com) has done in a 1968 hardtop (coupe) Mustang.

Tony Arme of American Legends has owned this car for roughly 15 years and decided to do something different, and he certainly pulled it off. This car was the talk of the 2018 SEMA Show this year. Not only does it have the Ferrari engine with a Nelson Racing Engines twin turbo setup, but much of the interior is from a Lamborghini and the body mods are extensive, from a 2.5-inch chop of the roof, flush glass, a laid-back windshield, custom side exhaust, molded in bumpers, one-off acrylic bumpers, a carbon fiber floorpan (!), and 3D-printed parts throughout. The centerpiece—the engine—is a Ferrari F430-based F136 V8 with a Ferrari California custom intake manifold, a T56 6-speed transmission with a sequential shifter, Ride Tech Shockwave air ride suspension, Avant F461 wheels.

Yes, it’s radical, but it’s also totally different and pretty cool. And yes, you will see it in the pages of Mustang Monthly very soon!
#MTSEMA18