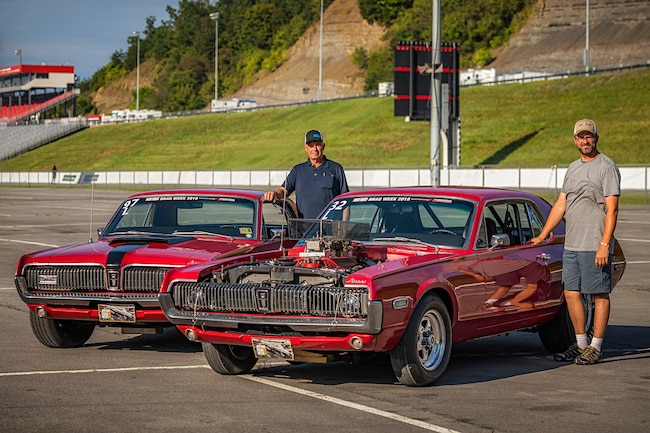 Hot Rod Drag Week is an event that brings out people and cars of all kinds. The week-long marathon has forged lifelong friendships among participants, and can even become a family tradition.

For Scott and Jack Miller, Drag Week is the aforementioned family affair. The father and son duo brought out a pair of beautiful red 1968 Mercury Cougars to run through the gauntlet that is five tracks in five days. The twin Cougars both ran in the Street Race Big Block - N/A (naturally aspirated) class and are specifically built for Drag Week. Scott looks forward to the event every year, and sums up the importance of family saying, "Most of all, I do it because my dad does it. My dad is 10 times the gearhead I’ll ever be—he has forgotten more than I’ll know. I don’t race my cougar to win first, second, or third; I race it to see my dad’s smile when I return to the pits and the pride he has in showing people that the old Ford FE can still surprise people."

Cars have this uncanny ability to shape our lives and create lasting memories. The Cougar holds a special place in both of the Miller’s hearts. Jack has owned his Cougar since his college years. This Cardinal Red beauty is an original, 1-of-47 R-code 428 Cobra Jet car, making it even cooler that he races it. The car served as a family car, and as such, it was the car Scott grew up in. Scott pointed out the teeth marks in the passenger side door panel that serve as a reminder of how this family car continues to be an integral part of their relationship. As he approached driving age, the time would come to look for a new addition to the family and Jack soon bought the second red Cougar for both Scott and his sister to drive. Although this Cougar would spend a portion of its life as a commuter car, it was only a matter of time before the two gearheads would take this second Cougar under the knife to transform it into a real street beast.

The dynamic father and son duo pose for a shot after completing their passes on Day 4 at Hot Rod Drag Week in Bristol, Tennessee.

What a true monster this old Ford would become! Scott's '68 Cardinal Red coupe features a Blair Patrick-built 502ci FE Ford engine with two Quick Fuel 850cfm carbs to feed the thirsty bigblock. A .700-lift cam, C4 automatic transmission by Joel on Joy, 4.30 rear gears, and an 8-inch torque converter round out the build on this feisty Ford. This power plant, producing 912 horsepower, would propel the big red cat down the 1,320 in a blistering 9.129 at 146.39 mph. This combination has been solid and reliable since it was put together back in 2014. Scott’s only issue with the car was during Drag Week 2017, when he lost an aluminum rocker. He drove the car 200 miles on seven cylinders, hoping the lifter would not come out of the lifter bore. Luckily, it stayed put and fellow FE fanatic Jay Brown and Blair Patrick next day air’d rockers to Scott so he could stay in competition. That’s the incredible sportsmanship that we see at Drag Week! After braking another aluminum rocker later that year at the track, Scott switched over to steel rockers for Drag Week 2018 and has never had an issue with them since. Despite losing a rocker, Scott still came away with the win in the Street Race Big Block N/A class.

For 2018’s event, the only real issue Scott experienced was fine tuning the suspension and transbrake. His best 60-foot time during Drag Week 2018 was a 1.25, leaving off the foot brake at idle. The car just blows the tires away otherwise. Even when he uses the footbrake and revving to only 2,500, it blows the tires away. Although this makes for a great show, it doesn’t help the E.T! Scott found that the best way to get the car to launch off the starting line is to use the footbrake at idle, then smash the throttle on green and flash the torque converter. Scott’s plan for Drag Week 2019 is to grab an eight-second timeslip and hoping that the research into a better suspension setup will be the key to that.

Two Quick Fuel 850 CFM carbs sticking out of the engine bay feed the Blair Patrick 502ci FE Ford engine. A .700-lift cam, Joel on Joy C4 transmission, 4.30 rear gears, and an 8-inch torque converter complete this Cougar’s mechanical heartbeat. This combination produces 912 horsepower.
Adaptations for street driving can be seen here with the plexiglass shields to keep rain away from the carburetors and distributor. Rain is almost always guaranteed on at least one of the days’ drives!
There is still something special about seeing a big naturally aspirated engine in a sea of forced induction. Scott’s 9-second Cougar is proof that keeping it simple can still produce impressive results in a tech-driven world.
The glimpse of the roll bar, large tach with a shift light, and extra gauges elude to the fact this Cougar is packing some horsepower under the hood. Since this Cougar pulls double-duty as both a street and track car, Scott kept most of the interior intact. The placement of the roll bar allows still allows for getting in and out of the car with relative ease, while still being NHRA legal. Proof that you can have your cake and eat it, too!
Jack’s Cougar is much more “street” than Scott’s, and the stock-ish interior shows that.
Jack peering into the engine compartment the check on the 428 Cobra Jet urging his cat down the track.
Scott warming up the tires before his pass at Bristol, Tennessee on Day 4 of Hot Rod Drag Week.
“Like father, Like son.” The Millers burn some rubber in preparation to blast down the 1320 with their classic cats.
What’s not to love about a shot of a seriously fast car hauling a trailer with slicks? This is a sight that never gets old at Hot Rod Drag Week. Scott’s car is truly a very fast, well-mannered street car in addition to a formidable race car.
Scott (left) and Jack (right) Miller with their twin Cardinal Red Cougars. The father and son have been participating in Drag Week for a number of years, starting in 2010 with Jack’s car.