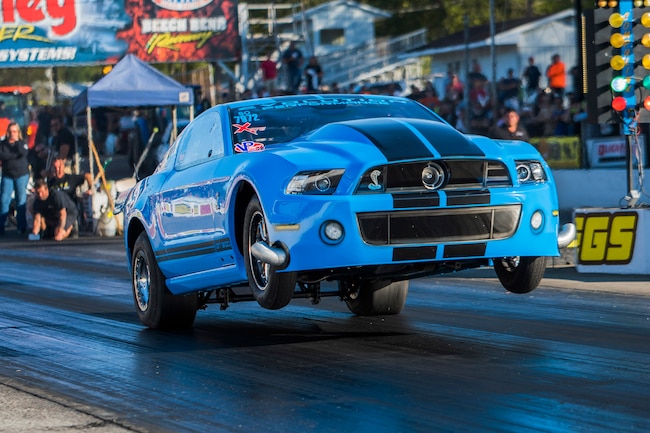 The most powerful Ford Shelby GT500—to-date—is the 2013-2014 Shelby GT500 model as both years offered a robust 662hp supercharged 5.8L under the bonnet. There have been precisely 4,885 versions made in 2013 and every single one of them is an 11-second capable vehicle off the showroom floor. Using an unscientific inquiry, several aftermarket companies estimate that approximately one-third of those models have received some kind of high-performance modification. Of those 2013 cars that have been modified, we are going to estimate around 150 or so have an actual 10-second timeslip in their glove box; and we are not talking Internet muscles of saying it runs 10s, but actually holding a timeslip. Moving much quicker, the number of 8-second GT500s from the 2013 model year is most likely less than ten.

We can say for certainty that the number of 7-second 2013 Shelby GT500s running around drag strips across the country is less than five. Nudge the line of lunacy a bit further to 6-second cars and there is just one—the 2013 Shelby GT500 that is owned by Brian Devilbiss and he loves raising hell on the dragstrip with it. The low e.t. for his specialty Mustang is a stout 6.78 seconds and his high speed mark is 206 mph in just 1,320 feet and 4.40 seconds at 167 mph in 660 feet.

The Pennsylvania-resident is no stranger to the Mustang craze. Devilbiss has had his share of quick cars. First with a 2007 Mustang GT that sported the typical modifications; soon the boost was too much for the stock short-block to bear and a connecting rod was launched through the side of the 4.6L block. “I figured rather than fix that car I’d sell it and buy Evolution’s shop car,” explains Brian on how he acquired the specialty snake Mustang.

Most enthusiasts would be satisfied with high 8s from their 2013 Shelby GT500, which is what the car ran when Brian Devilbiss bought it from Evolution Performance. However, the quest for even quicker times has led Brian to 6-second timeslips with a best of 6.78 at 206 mph.

The new-to-him ride was no slouch, having run 8.80s with Evolution Performance’s Nelson Whitlock behind the wheel. Adding more lore to the legend of the shop car was the fact that a Tremec TR6060 six-speed backed the Kenne Bell supercharged beast, instead of the popular Tremec Magnum with aftermarket upgrades that others have resorted to at big power. That fact marks it as the quickest and only 8-second “un-modified factory” 6-speed Shelby GT500, a record that still stands today. However, the leap to the current state of 6-second affairs began like all good stories, with broken parts.

An outing late in the season at Cecil County Dragway was supposed to net Brian a new record run for a stick-shift operated GT500, instead it served as a gateway to his next round of modifications. “I broke the rearend,” he discloses. Out came the 8.8-inch housing and replacing it was a sturdier and fortified 9-inch setup. Brian also opted to ditch the manual transmission in favor of a race ready TH400 three-speed automatic. And of course, why add a bulletproof drivetrain without upping the horsepower at the same time? The Kenne Bell 3.6LC was replaced by the more massive and powerful 4.2L version.

The interior is standard fare for a 6-second ride as the driver finds comfort in a Racetech seat and is surrounded by a SFI 25.3 certified roll cage. Brian grips a lightweight steering wheel while keeping an eye on the engine parameters on a Haltech display by Racepak.

Brian’s revised Shelby GT500 produced more than 1,100rwhp on Evolution Performance’s in-house chassis dyno and they declared it ready for action. Its first outing was an NMRA event at Maryland International Raceway in 2014. The team entered the popular Terminator vs. GT500 Shootout, a class that is run at select events, scoring Brian low 8-second runs. The car was running hard, but as Brian says, “not quick enough.” After getting beat by Scott Waters, he confesses “I knew I had to get a turbo on the car after that.” The events that followed the turbo conversion went quickly, in more ways than one.

The chassis was updated to keep the car NHRA legal to run the times it was capable of producing with the new Precision 94mm turbocharger setup that Evolution Performance fabricated. Next came runs in the 7.30 range from the 3,500-pound land barge as Brian became the leader of the class. But as he wanted to keep pushing it harder and harder, most of the Terminator and GT500 enthusiasts weren’t looking to keep up. He decided to head over to one of NMRA’s heads up championship categories, first stop was Renegade.

Evolution Performance modified the vehicle to be class legal with a smaller Precision 76mm turbocharger, however little else was needed due to the full weight of Brian’s GT500. The car was flying in class legal trim, pounding out 7.60 performances at a time when 7.50s was the norm for the top players, but the lure of going quicker ate away at him. “I stepped up to Street Outlaw,” Brian explains.

HFR Fabrication began cutting, welding, and fabricating as the chassis shop converted the GT500 from strip stormer into a bona fide 275 radial racer. The chassis was updated to an SFI 25.3 and stock wheel tubs were removed. Mini-tubs were installed so the car could be lowered using in-board mounted Penske Racing coilover shocks by Precision Racing Suspension. The fabricated 9-inch housing is from Racecraft and is a few inches shorter than stock, so the Mickey Thompson drag radials could be tucked under the fenders cleanly. The front and rear suspension components also came from Racecraft and a set of Santhuff struts is bolted in the front. HFR Fabrication mounted a carbon fiber nose and doors to get the weight out, bringing the final race weight with the driver down to around 3,000 pounds.

As the car was being worked over, the same was going on with the engine. The fine folks at MPR Race Engines were tapped to handle the 5.8L build for Brian’s GT500. The first step was to reduce the final displacement to 349ci, helping the rod/stroke ratio and other tricks that are proprietary to MPR Race Engines. The four-valve cylinder heads were also ported, and oversized valves installed to help airflow from the Precision 94mm turbocharger that is hanging on the front of the engine. The factory air-to-water intercooler and lower manifold are still employed, though a larger Kenne Bell BIGun intercooler brick replaces the stock one.

MPR Race Engines is responsible for building the 5.8L mod motor to handle the 2,000hp it produces. Topping the bullet is a unique induction system; Evolution Performance added a Precision Pro Mod 94mm turbo that blows into a factory supercharged lower manifold with a Kenne Bell BIGun intercooler brick and bonnet.

A Proformance Racing Transmission TH400 has been selected to harness the power and it has been filled with Coan Racing parts. A Haltech Elite 2500 engine management system controls the 2,000hp combination and Patrick Barnhill of PTP Racing is responsible for calibrating the engine and handling the power management. Evolution Performance is still heavily involved in the car, as it has been since day one, handling final assembly, support and maintenance on the 6-second ride.

As the sun sets on the 2018 racing season, Brian is hoping to get into the 6.50s during the World Cup Finals at Maryland International Raceway before parking it for the winter. The off-season, however, won’t dull his skills as a new street car is being finished up at Evolution Performance. This time he picked up a 2018 Mustang GT that was supposed to be a street cruiser, but it already has an a new Edelbrock 2650 supercharger, exhaust, and suspension mods, which sounds like the start of a completely new project.

However, the tale of the 2018 street toy is one for another day, for now Brian enjoys the fact that he has the only 6-second 2013 Shelby GT500 and expects to continually improve on his best performances in 2019. 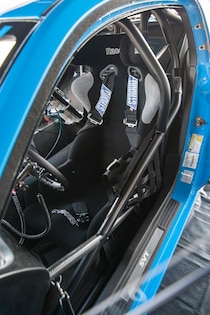 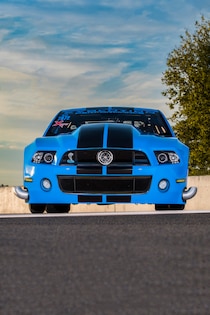