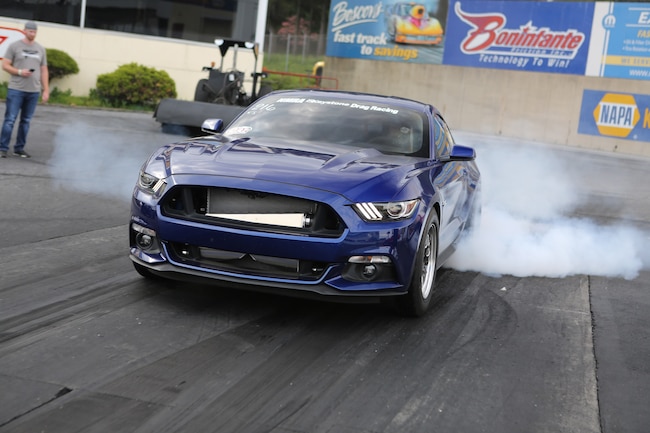 Over the years dozens, if not over a hundred, Lund Racing customer cars have graced the pages of Muscle Mustangs & Fast Fords in one way or another. The company’s work isn’t visually glorifying like artwork from a metal fabricator or the latest forced induction trick unit. It is, however, an intricate part of going fast and making power in the modern Mustang world. Lund Racing is a team of calibration experts who have been on the forefront of ECU reprogramming since it became the cool thing to do in the early 2000s. From 7-second Shelby GT500s to 2018 Mustangs with bolt-on parts, Jon Lund Sr. and his staff have built an empire in the tuning game for street and strip machines.

For those who don’t know Jon, he isn’t a former engineer at an automaker or have a background in computer engineering. In fact, his professional skills didn’t begin in an automotive related field, as he is a helicopter pilot and is charged to lead a group of skilled aviators who tote high-level executives all over the countryside to important meetings.

The tuning business began as a hobby and blossomed into a booming business, one that Jon is heavily involved in but shares the day-to-day operational responsibilities with his son, Jon Lund Jr.

So what does an accomplished helicopter pilot and one of the foremost tuners in the Mustang game do for fun? The answer is dust off their old R&D vehicle, make a big leap in power, and continually challenge his staff to perfect their calibration skills in all sorts of applications, including 1,350rwhp street cars.

“We bought the car in late 2014 when the 2015 Mustangs came to the market,” shared Jon Jr. He continued, “it was used for R&D, initially, for the 2015 cars and ran low 11s in NA trim with a torque converter, long-tube headers, and E85.” The group perfected the 6R80 transmission calibration in short-order and began looking for more ways to go quicker. Next was adding boost with a Vortech supercharger and 9.20 timeslips filled the glove box. The interesting part about Jon’s boosted Coyote was that the Internet forums and social media pages lit up with accolades due to the stock long-block that sat behind the blower.

Cracking into the low 9s, a few years ago, with the stock long-block intact was impressive, but like all R&D projects, they run their course and are shoved into the dark corner of the shop. That was until Jon Sr. got the itch to go faster and with a little motivation from the guys at Lund Racing, particularly the late Dasan Hollowy, the 2015 Mustang GT mule was dusted off and put back in the limelight.

A unique characteristic of the L&M Race Engine built Coyote is that the VCT is retained, a rarity in big power applications like this one. It allows the calibration experts to move the camshafts to help the turbos spool quicker. According to Jon Lund Jr. it also benefits performance in roll racing competitions.

As the car was being prepared for action, L&M Racing Engines built a fortified short-block. The factory Coyote block received aftermarket sleeves for added durability while the factory crankshaft throws around a set of Manley I-beam connecting rods and custom Diamond pistons (10:1 compression). Topside, Slawko-ported cylinder heads are fitted with oversized valves and are fastened to block using robust 12mm head studs.

The valvetrain is where Lund Racing deviates from the norm—the off-the-shelf COMP camshafts are Stage III sticks and the elder Lund requested the VCT control be left operational. Jon Jr. explained, “one of the reason we kept the VCT was the fact that the 2015 engines can be tricky when locking out the camshafts. And also we have discovered different tricks with regards to the oil and VCT.” By moving the camshafts the team can help turbo engines spool quicker and the VCT can also be an effective tool for those enthusiasts who enjoy roll racing. Topping off the new engine is a GT350 intake manifold along with a twin turbo kit from HPP that uses a pair of Precision 6466 turbochargers. The kit’s intercooler was swapped in favor of an air-to-water setup from No Corners Cut Fabrication.

Feeding the beast plenty of E85 fuel is a set of Injector Dynamics ID1700 fuel injectors and a Fore Innovations billet hat houses three fuel pumps that feed a return-style fuel system. Naturally a factory PCM handles all of the controls and the team uses proprietary calibration software to tune the twin turbo engine.

The 6R80 transmission received a significant amount of upgrades from Power by the Hour. The billet internals turned it into a three-speed transmission, with a Fourth gear for Overdrive. A Circle D experimental torque converter was slipped into the bell housing and Lund Racing reports that it works exceptionally well in their application.

The 6R80 market is rapidly changing to keep up with the big horsepower from today’s turbo and supercharged combinations. Working with Power by the Hour, Jon decided to move over to the company’s 4R200. The transmission is based on a 6R80, but uses billet internals to convert it from a six-speed to a three-speed, like TH400, but still retain Overdrive (acting as Fourth gear) for street use. Since this is an R&D mule, Lund Racing is working with Circle D on its new 252mm torque converter with the lock-up clutches removed.

The rest of the drivetrain is par for the course when it comes to an 8-second, IRS-equipped Mustang. GForce Engineering was tapped for its Strange Engineering 9-inch centersection along with upgraded axles. The rear gear ratio is listed as 3.50:1, mostly due to the fact that the car is a street car and they plan on going over 170 mph with it. A Steeda IRS subframe brace with three mounting points helps stiffen up the car as well as a 10-point roll cage by 1320 Fabrication. Viking adjustable rear shocks help keep the IRS squat to a minimum and plant the Mickey Thompson ET Radial Pro 275 tires. Viking was also tapped for the front struts, which are adjustable and have coilover springs.

The rear suspension does an amazing job at planting the Mickey Thompson ET Radial Pro 275 tires. Lund Racing uses a mix of Steeda and UPR components, along with a set of adjustable Viking shocks, to stick the radials to the track. They’ve been rewarded with a best sixty-foot time of 1.27, not bad for a 3,900 pound Mustang (with driver).

The car was recently completed and the numbers right out of the gate are impressive. On the chassis dyno, at 29 psi, the S550 pounded the rollers to the beat of 1,350rwhp. Jon Jr. noted that result was accomplished with the torque converter unlocked. On track, the max boost has been kept to 26 psi as they sort the chassis and boost controller ramp. So far, the best e.t. has been an 8.33 at 169 mph, but it was with a soft 1.30 sixty-foot time. Jon Sr. has carded a best of 1.27 and with more boost on tap, the goal of running in the 7s is possible. First, they have to get weight off the car as it tips the scales at 3,900-pounds with driver in race trim.

With Holloway looking on from above, the Lund Racing crew is preparing the car for an assault on the 7s—complete with 6R80 transmission and IRS still slung under the backside. The only question that remains, how far into the 7s can they run?