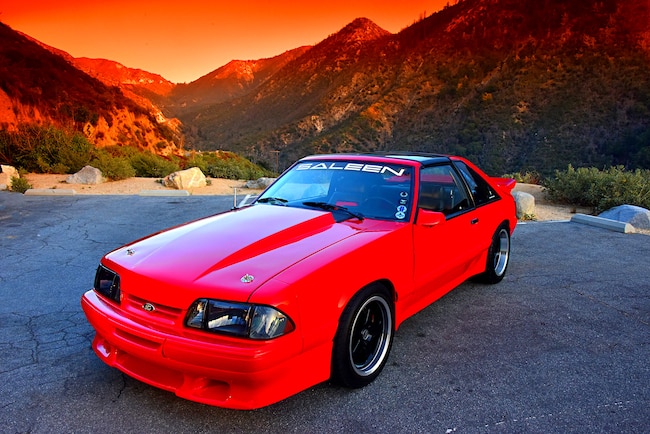 In the Mustang world, purchasing and/or building a car to take on daily driving duties is one thing. Keeping the car as a daily driver is a whole different story. It doesn’t matter if the car is used for the long commute back and forth to work and for packing groceries into the trunk. Before you know it, the gears up there start turning, and you’re thinking of ways to make to make it better. The process usually starts innocently enough. Whether the car isn’t loud enough, or not fast enough, or maybe just not cool enough. Ideas start to trickle, and before long, they’re too hard to shake. It’s just how we are wired. Us car people just can’t leave things be. If we did, what’s the fun in that?

Jack Khachmanian knows the struggle. Back in 2000, he started the search for a Fox-body to build into his daily driving vehicle. He knew he wanted a Fox, and eventually he stumbled across a rough Burgundy 1987 Mustang that had seen much better days. Those 13 years had not been kind, and it was a far cry from its late-1980s youth. Knowing he would fix it up, Jack purchased the Mustang and got busy stripping the car down to rebuild it back up.

Drawn to the appearance of the 1987 Saleen Fox-body, Jack started creating his own Saleen replica. The only thing on the exterior that breaks the Saleen theme is the aggressive Cervini’s 3-inch fiberglass cowl hood.

“All of the parts came off of an original Saleen car besides the hood,” Jack says. “The rear spoiler, the front spoiler, basically everything. We pretty much started from scratch on the vehicle.”

Soon the body was assembled and ready for its new Ferrari Red hue. “I really like red, so the car was painted the red that was my favorite at the time,” Jack explains. The work was performed by Southlyn Collsion Center of South Gate, California.

Time to get down to the nitty gritty. As mentioned before, Jack was looking for some power to back up his pony. Tucked inside the engine bay is a 331ci stroker engine built by Gary’s Automotive in South Gate, California. To up the performance ante even more, they added a ProCharger running 12 psi. A 3-inch core intercooler keeps everything running cool and smoothly.

The GT40 intake draw the fuel and air mixture into the cylinders, and 42 lb/hr injectors quench the thirst for fuel. Crammed inside the tunnel is a T-5 transmission from Ford Racing with shifting power guided by a Ram PowerGrip clutch. Suspension components consist of Ford Racing springs along with their upper and lower control arms.

For the perfect exhaust symphony along with added performance, the exhaust gases flow down to a 3-inch Flowmaster exhaust that is complete with an x-pipe. With all performance modifications working in harmony, this Saleen clone makes 400 horsepower and 390 lb-ft of torque.

Being a complete replica, of course it sits on original Saleen wheels. And no Saleen is official without the big man’s signature on the dashboard. That happened at the Ponies at the Pike show, Steve Saleen was walking around and stopped to admire Jack’s build. “I asked him to sign my dashboard,” Jack says. It’s always a proud moment when the man who created the Saleen brand acknowledges it in admiration.

While the bright red exterior of the car is certainly eye-catching, open the doors to display an immaculate red and black interior. Jack wanted the feel and appeal of a modern car. “It’s black leather with red suede inserts in the centers. The door panels have black stitching showing the Saleen emblems,” Jack tells us.

Gauges for boost and oil on the pillar provide Jack with the important vitals and of course it features the original Momo steering wheel that belonged in the original Saleen Fox-body cars.

It’s safe to say that no stone was left unturned on Jack’s Saleen replica build, and it certainly breaks necks at car shows. Jack enjoys showing it off at shows around the Golden State, including the massive Fabulous Fords Forever at Knott’s Berry Farm in Buena Park and Ponies at the Pike in Long Beach. Let’s not forget any show at Saleen headquarters located in Corona, California. You can count on Jack and his Fox-body clone to be in attendance.

The cabin of Jack Khachmanian's 1987 Saleen replica features black leather with red suede inserts in the center of the seats. It also features an original Saleen Momo steering wheel, and gauges to monitor the engine vitals while cruising around the Golden State.

Jack built his 1987 Saleen replica all the way down to the original wheels with the only exception being the addition of an aggressive Cervini's 3-inch cowl fiberglass hood. With red being his favorite color, Jack slathered the exterior in the vibrant shade of Ferrari Red.

With the intent of building a daily driver with some oomph, Jack turned this 1987 Fox-body into a complete show car instead. Powering the beast is a ProCharged 331ci stroker and throws down 400 horses and 390 lb-ft of torque.