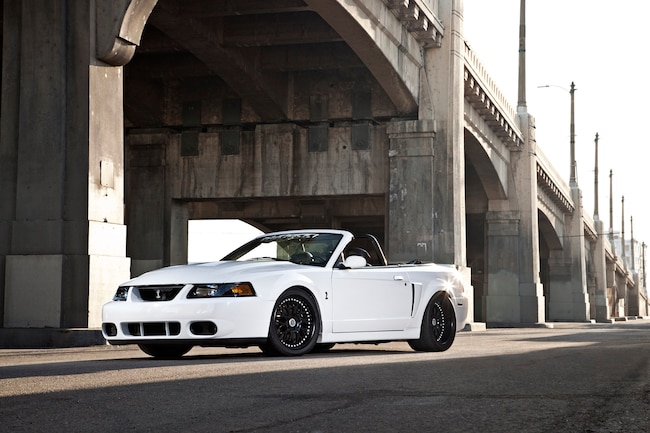 Like countless Mustang success stories before it, this tale harkens back to adolescence and the countless hours so many generations of young gearheads spent staring at posters of fast cars hanging on their bedroom walls.

“I would have done anything for a Terminator Cobra, but my parents thought they were too expensive and too fast, and so did the salesman at the dealer, so before my first semester at Universal Technical Institute (UTI), my parents convinced me to lease a V6 New Edge...instead of a Cobra,” Jose Caldera said. Not exactly the first Mustang he had in mind, but it proved to be a reliable driver during his years of study at UTI.

“After my lease was up, I was over the agreed upon mileage by $7,000, but that didn’t stop me from again telling my dad that I still wanted to buy a Cobra...except another salesman again stopped my pursuit of a Cobra,” Jose said.

That salesman told his dad that the Torch Red Cobra sitting on the lot was too quick for his young son, Jose, and that he was a better candidate for a Dark Shadow Grey (DSG) GT, a car that Jose still owns to this day. Not that we’re counting, but that was the second strike in his pursuit of a Cobra.

“I didn’t get the Cobra, but the salesman waived the $7,000 mileage fees and I got a clean GT that I daily drove for years with simple bolt-ons like a DiabloSport tuner, a Typhoon intake manifold, CAI, gears, pulleys and lowering springs,” he said.

Despite such a nice New Edge, and one in a rare color no less, his love for the Terminator never waned.

“After I was a little older, and married with a good job, I just couldn’t shake my desire for a Terminator Cobra, so I started searching for one on the used market, but it was much harder to find a clean one than I thought,” Jose said.

He knew it had to be a ’vert, and that it had to have the quintessential light bar, but other than that, he just wanted the car to be in good shape. After originally leaning toward a black Cobra and coming up empty handed on the used market, he found the Oxford White Cobra before you roughly 500 miles north of his hometown.

“It was a stock, two owner lease return car with 55,000 miles on the clock; it had new tires, brakes, and a clutch too, so I made the trip up to see it, and drove it back,” he said. It would seem that third time’s the charm—hello, Cobra!

Thanks to Kurgan Motorsports, the Cobra made 814whp and 753 lb-ft at the wheels sipping plenty of E85. Yes, it still uses the stock motor, and even the heads are untouched. How’s that for impressive?

Like most Mustang stories, Jose initially thought he’d keep his car fairly stock...but as you can guess, that didn’t last long.

“Originally I was just going to lower it and add the light bar, but when I started reading about how much power a Cobra can make with simple bolt-ons, I decided to also add a JLT intake, SLP LM1 exhaust, 2.8-inch pulley, colder plugs, an SCT XCAL, a Boost-a-pump, an AEM wideband, Aeroforce dual gauges, and a tune from GTR High Performance—I couldn’t believe how easily the car made 430whp,” he said.

As you can guess, horsepower is an addictive substance, so when Jose won a raffle for a free 1320Junkie ported blower case and elbow, he of course obliged, which pushed his dyno figures to a new best of 480whp.

When Jose attended the Fabulous Fords Show that spring he had no idea he’d leave the show with a new list of must-do mods. In this case, it was the black 2.3L Ford Racing blowers lurking under a few Terminator’s hoods that made him realize there was no other option, he had to have one.

Shortly thereafter he found a used version of the Ford Racing blower on Craigslist, and it even had some injectors, too. With the new, bigger blower and Borla Stingers in place, and a new tune from another local shop, the car made 520whp.

“At about that time I met another local guy by the name of Jeremy with a clean supercharged Fox-body that was going to fly Bob Kurgan of Kurgan Motorsports out to the West Coast to tune his car and a few others, so I decided to have Bob tune mine too,” Jose said.

As you can guess, Jose decided that his current setup just wasn’t enough, so he added a 4-pound lower pulley and a smaller upper unit, as well as an SCT BA-2600 MAF, a JLT oil separator, Fluidyne heat exchanger, Kook’s 1 ⅞-inch long tube headers, 60 lb/hr injectors and a water/meth kit to keep detonation at bay; the combo made 18-pounds of boost and 670whp on E85 and methanol.

An Oxford White convertible Terminator Cobra will easily go down as one of the best looking Mustangs of the modern era; period!
There’s just something special about the rearend of a slammed Terminator Cobra; that small wing, the tucked-up bumper, polished pipes snaking around the IRS, Borla tips, and of course the 2001 tail lights, too.

While the upper 600s at the wheels would make most Terminator owners happy, Jose decided that a bigger 2.9L blower was a must, as was ID1000 injectors and an upgraded fuel system from Fore Innovations since he planned to spin the bigger blower pretty hard. But that wasn’t all, he also wanted that chop, that lope; so he sprung from some custom Bullet no springs required cams from Kurgan Motorsports. The combo was nothing short of impressive, as the Cobra pounded out 814hp and 753 lb-ft at the wheels on 19psi of boost with the stock short-block and untouched heads. We don’t know about you, but making over 800 at the wheels on a stock motor, save for cams, is beyond impressive.

“The car is an absolute beast, it’ll easily blow the tires off whenever I want, but with the suspension and drivetrain modifications I’ve made, the car is buttoned down but also easy to cruise, too,” Jose said.

Power is nothing without control, so Jose went the extra mile to stiffen things up with a Stifflers FIT system, which consists of full-length subframe connectors, stiffening rails, and a web brace. Continuing in the vein of safety and chassis stiffness, a Maximum Motorsports six-point roll bar and strut tower brace were added, as was a Steeda differential brace. The finishing touch was a pair of True Forged expansion tanks under the hood and matching True Forged Chicane wheels measuring 18x9-inches up front wrapped in Nitto tires and 18x11-inches steamrollers out back fitted with stick Hoosier drag radials.

The right wheel finishes the build, and the True Forged Chicane wheels, measuring 18x9-inches up front wrapped in Nitto tires and 18x11-inches out back fitted with stick Hoosier drag radials are the biz.

“There were many times after I got the car that I regretted buying a convertible, I’d kick myself and think I should have bought a coupe, but as time has gone on I’m glad I went with the ‘vert, it’s much more rare, and with the top down, nothing looks like it,” Jose said.

It’s been a long road for Jose, full of several strikes, a couple of other Mustangs, and a whole lotta life, but if this story tells us anything, it’s that persistence pays off...and Jose’s got 814 reasons why this Cobra was well worth the wait.

Now that the car is making north of 800hp to the tires, Jose moved from a style-forward light bar to a Maximum Motorsports six-point roll bar for safety and stiffness.
Funny thing is, after wanting a coupe for so long, Jose eventually realized that owning a ‘vert makes his Cobra just that much more rare. In the end though, he owns both, as he more recently purchased a higher-mileage, formerly daily driven DSG coupe from his neighbor. He plans to keep it pretty mild... 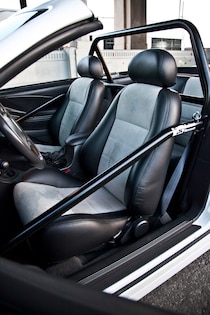 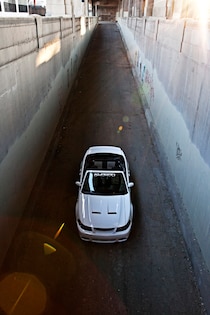 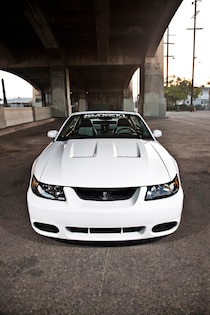