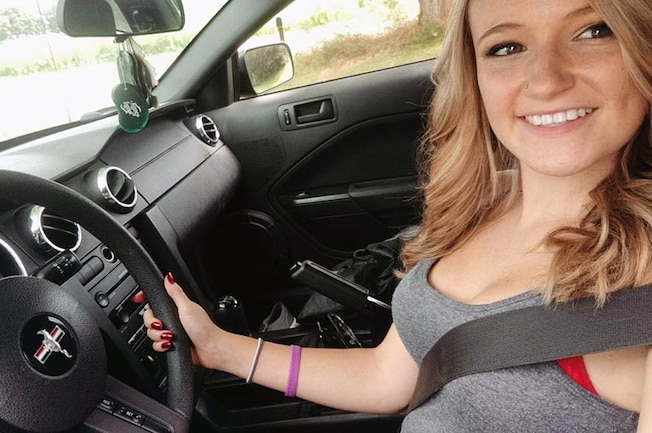 What better way to start your week than with Mustang Girl Monday! This week we would like to introduce Rosalie King, whose passion for Mustangs started at a young age. She tells us, "As a kid I was always outside or in the garage with my dad, working on whatever needed fixing that day. Anything from lawn mowers to trucks and more. My father has had many hot rods but above all his favorite were his Mustangs. Because of this I caught the Mustang bug at a very young age and I was determined to make a Mustang my first car."

Rosalie's determination paid off. She continues, “At the age of 16 I bought a silver '07 V6 S197 Mustang. I learned [to drive a] standard on a 1990 Ford 5-ton, so going from that to a Mustang was a huge change, but I was immediately hooked. I loved that car and felt I had so much freedom and style. I got into a hell of a lot of trouble with that car and had even more fun but after five years I decided it was time to start looking for a new project and put the V6 up for sale. But there was no way I could be without a pony, so I purchased an '88 Cobra 5.0 Fox-body! I'm currently working on it with friends and my dad, of course. It’s coming along well and I cannot wait to take it to the track this summer.

“A Mustang for me has so much meaning, history, and freedom. A car that has been around for generations and is still loved by so many can't be wrong. They're affordable, versatile, and overall fun as hell. Mustangs will forever be my favorite car, and I know I will never be without one."

Each week Team Mustang Girls features a different female Mustang owner, so if you want to be like Rosalie and get your story told, submit your story at http://teammustanggirls.com/submit-your-mustang-story/