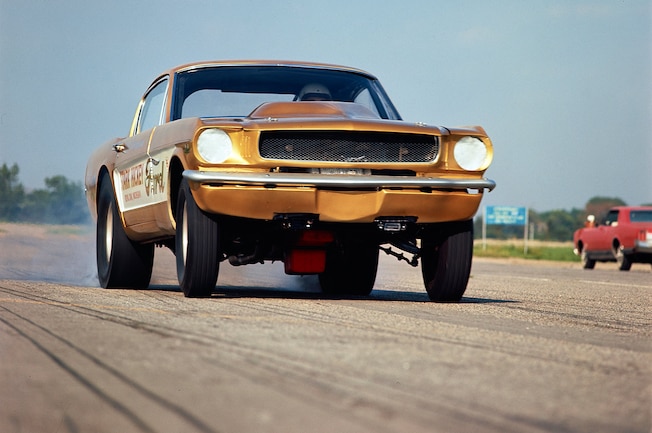 In March of 1965, Ford Drag Team leader Dick Brannan treated ace Petersen Publishing photographer Bob D’Olivo to a session unveiling his latest match basher, the Stark Hickey Ford “Bronco” Mustang. The fastback was one of many Fords that put Brannan across the line first, more than any of his teammates, including Gas Ronda, Bill Lawton, Les Richey, and Hubert Platt.

The color photo shoot was primarily to obtain nice action photography, while black-and-white film was expended on detail shots and tech bits. Bob’s color photos, while excellent, weren’t used in the three “green” pages of Roger Huntington’s December 1965 story in Car Craft magazine. What was in there, however, was a ton of great new tech info that made Huntington such a popular journalist. Ford came to the A/FX wars late, but better prepared. By the time the ’65 NHRA Rulebook hit the strips the Fords were totally compliant.

The Mopars that had pioneered the scene were ousted—now “outlaws.” All the excitement about seeing these two manufacturers duking it out on the hot strip of asphalt wasn’t gonna happen under the new NHRA rules.

No self-respecting drag racing promoter was about to turn their back on anxious fans, and the flush cash that follows them, with this kind of excitement already generated. Ford, with the help of Holman Moody, had a big player in the Match Bash Funny Car Wars to follow up on the Thunderbolt’s initial payback regime.

The Mustang did well at both the track and on the showroom floor. Brannan proved himself an excellent leader and promoter, keeping his cars, and the Ford name, in front of potential customers at the strips. His leadership tenure ended in 1972—the era of fuel economy and the waning factory interest. Today, some of his cars have been restored by fans. An apt tribute to a legendary team leader.