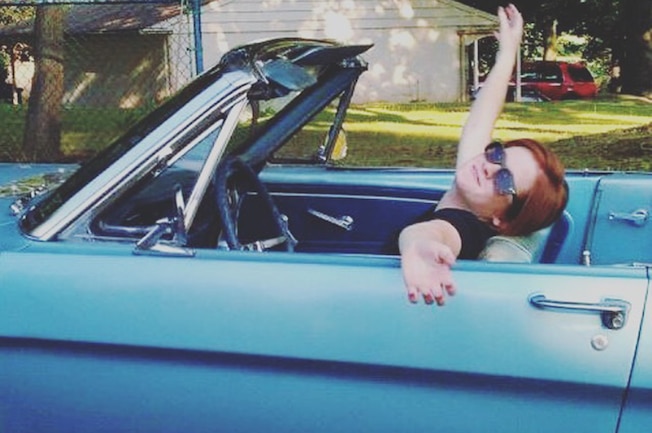 Rachel Herter is aware she has a Mustang addiction. Even her email address includes the words "A few too many ‘stangs."

But is that really a problem? Rachel tells us, "My Mustang obsession started when I was 10, helping my dad in the garage work on his 1969 Shelby G.T. 350. That's when I decided I wanted a Mustang too. Three years later I decided I wanted the same Mustang as Hilary Duff when she was in the Cinderella movie. My brother found a vandalized 1966 convertible that I purchased in 2004. I spent so many summers with my dad learning and working on everything. I replaced the gas tank, radiator, and maintain the drum brakes. Every week I would save my money to buy a new part."

The saying is the "Seven Year Itch" but we think in Rachel's case she likes to change it up every three. She says, "Three more years later I ended up purchasing a four-cylinder fox body all because it was reef blue. The same color as my older brothers’. I did all the work on that one with the help of my brothers and dad this time. I did body and paint with my brothers who own a body shop and a 5.0 motor swap and added aluminum heads and intake. Shortly after that I even learned how to put in 4.10 gears in the driveway with a Haynes manual. To finish the Fox off I did the five-lug conversion and all wheel disc brakes. For some more appearance modifications I put 2003 Mach 1 wheels on and a retro Mach 1 interior. I love going to car shows with my family. Mustangs have brought us all together, and give us stuff to talk about on Sunday night dinners. Carlisle and the American Muscle show have brought so many great memories."