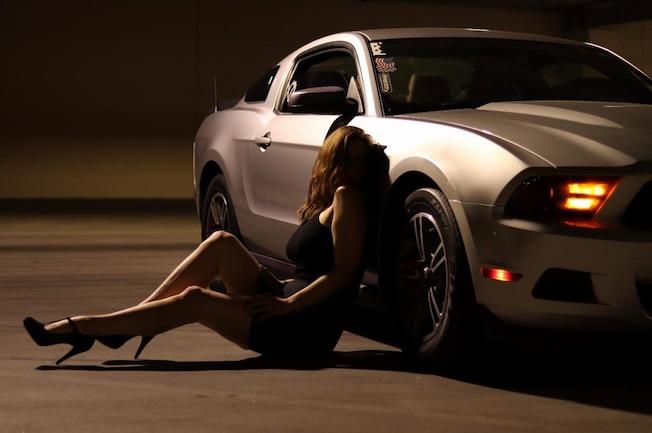 “My name is Ashley Barnes and I live in Long Beach, California. I am one of the presidents of an entirely female Mustang club based out of southern California entitled Sinister Society. My best friend Caitlin Muaina Martinez is the other president and is also my photographer.

“Sinister Society was founded in July 2017 and currently has over 20 women, reaching from San Diego to Ventura. We attend car meets and car shows and even hosted a Mustang vs Camaro friendly rivalry meet of our own during which we raised $400 for the Las Vegas Victims' Fund following the tragic shooting that occurred in October of last year. We are a great group of diverse ladies who love cars and are always dreaming and chatting about our next mods.

“My older brother Dustin, a Sergeant in the Army who passed away in 2012, ignited in me my love for cars, which started with drives in his old Celica around rural Pennsylvania where we grew up. I moved to California in 2005 with my mother (just the two of us). Thereafter Dustin got a beautiful gunmetal new edge (which was unfortunately totaled when someone hit him) and would send me pictures and videos of it and I fell in love.

“I got my first Mustang in 2009 when I was 19 years old. It was a totally stock 2000 V6 and I loved it. I had Spirit (the name of my new edge) until I upgraded to Magdalena (Maggie for short) on March 4, 2014, when I was 23. Maggie is a 2011 3.7L cyclone. She's got Flowmaster 40 Series exhaust and tips, BBK shorty headers, a Hypertech California Special tune, SR Performance cold-air intake, upper and lower pony delete grille upgrade, a drilled and slotted brake setup, and some pretty rad VMS Racing spiked lug nuts which were a Christmas gift from Caitlin. I am planning on upgrading to a GT or Shelby next year so Maggie is in store for mostly maintenance until then (and probably some lowering springs and a throttle body, because I just can't help myself). I also take Maggie to the Auto Club Speedway for drag racing as often as I can.

“You can find me on Instagram at @seeyouatthefinishline and @sinister_society and my best friend at @rowdyyyroush for more photos. You can also find some additional photos here: https://www.autobadges.com/models/set-5/ashley-barnes.html.”