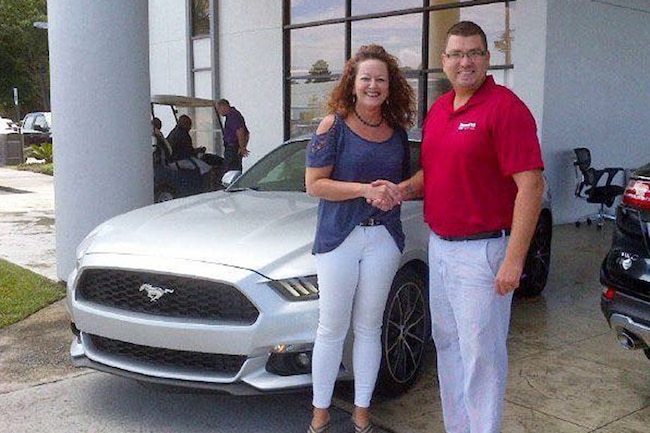 It's the start of another week and that means one thing; it's time for another Mustang Girl Monday, brought to you by Team Mustang Girls. This week we would like to introduce Michelle Hatfield and her 2016 Ecoboost.

Michelle's passion for Mustangs started when she saw pink. She told us,"I remember my first memory with Mustangs was with my Aunt and her 1965 Pink Mustang. I've been in love ever since."

Although her desire for a Mustang started early, Michelle learned that good things come to those that wait. She tells us, "I grew up in a Ford family and of course my favorite one on the car lot was always the Mustang. But, as I grew up and got married I was always told it was ‘never practical.’ My dreams were put on hold as I had a beautiful baby boy and he was later diagnosed with Autism. So, my Mustang dreams stayed just that, a dream. My son was 9 and I then became a single mother/caretaker to my amazing son. I still persevered and remarried to a wonderful man and 16 years later he made my Mustang dreams come true. The little girl that dreamt of getting behind the wheel of that sweet muscle car finally made it to the driver's seat. I’ve wanted a Mustang since I was 12 and my sweet husband bought ‘her’ for me on my 50th birthday. I am more in love with them now than I ever was and I am looking forward to buying a classic!"