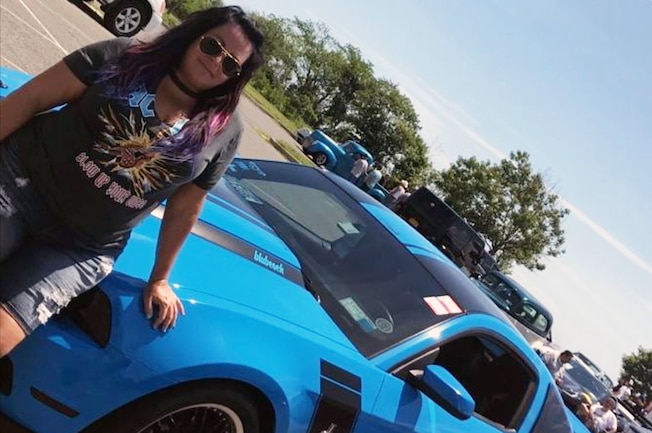 This weeks Mustang Girl Monday is Lisa Romani who fell in love with a 1972 Mustang and now has very own 2012 Grabber Blue S197. She told us, "My earliest memory of Mustangs is of my dad's 1972 Mustang when I was a kid. Later my brother got an '86 black 5.0 GT with T tops. He would pick me up in front of school and I would have the time of my life showing it off!

While Lisa always had a love for Mustangs she did stray slightly from the blue oval but found her way back. Lisa said,"I always had a love for cars. I owned a '69 banana yellow GTO. I had a lot of fun with that car but not more than I'm having with my 2012 Grabber Blue S197. I found the car online, went and looked at it, and fell in love. It didn't matter it was a V6. I always get the same question, ‘Why didn't you get a V8?’ To me it didn't really matter because when I saw my car something just seemed right about it."

Since then Lisa has been busy making it her own. She continued, "The car was bone stock when I purchased it. I immediately began to envision a different look and the birth of the #BluBeoch started. I tinted the windows, added an original design of stripes, front fascia, Roush side splitters, strut tower brace, engine dress up kit, BBK shorty headers, complete Pypes exhaust, and SCT race/ghost tune. I also lowered the car 1.5 inches all around and finished it off with some hot 20'-inch SVT wheels. And all the work was done in my backyard! The car is far from done but in the meantime I've been on a Fox hunt. Before the mods I was doing the 1/4 mile in 14.4 at 98 mph. Now I have the car doing 13.8 at 101...so far anyway. I'd like to get it to 13.4 and I'll be happy. Not bad for 'just a 6.’ Until then I look forward to the cruises I do with the new families I found with Venom Outlaws, Venom Stangz, PVR, Wild Stallion,s and Unforgiven Mustang Club. The fun is never ending."